Deere & Co. (DE) has been weakening since January/February but chart support around $130 has managed to stave off deeper losses. Let's review the charts and indicators for DE and see what the next few months may hold for investors.

In this daily bar chart of DE, below, we can see a pattern of lower highs from January, but buyers have entered the market in the $135-$130 area in late April/early May, July, August and late October.

Both the 50-day moving average line and the slower-to-react 200-day line are pointed down with negative slopes.

The daily On-Balance-Volume (OBV) line has moved up and down the price action and has moved lower from early October. The OBV line has not broken its lows of May, July and October so there is some support there.

The daily Moving Average Convergence Divergence (MACD) oscillator gave a cover shorts buy signal at the beginning of November and is close to crossing above the zero line for an outright go long signal.

In this weekly bar chart of DE, below, we can see that prices are below the declining 40-week moving average line.

The weekly OBV line looks firm and is close to a new high for the move up. Much different from the daily OBV line.

The weekly MACD oscillator is just below the zero line and could soon give a buy signal.

In this Point and Figure chart of DE, below, we can see a downside price target of $116.81 but that could be delayed because of a year-end rally. 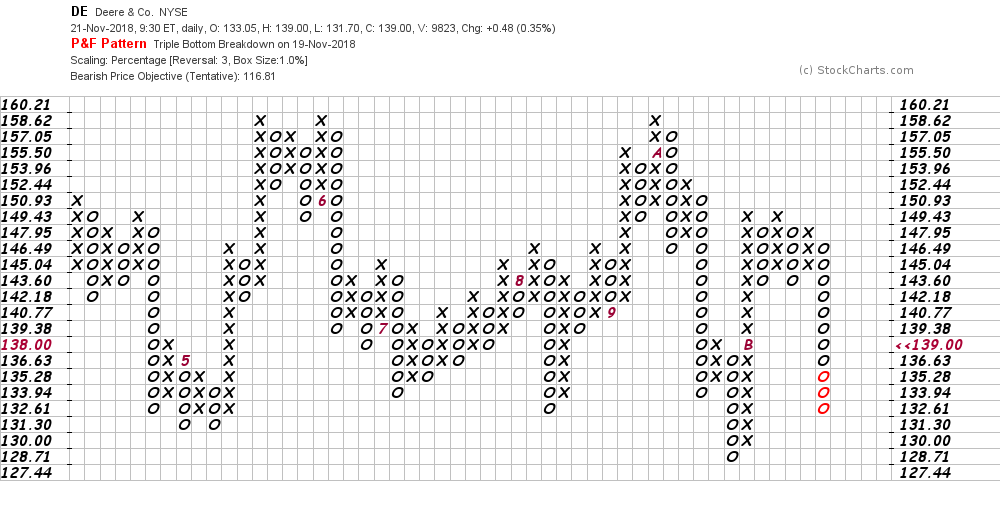 Bottom line strategy: The parameters are clear - go long on a couple of strong closes above $150 and go short on a close below $129.