In between earnings seasons. A hush comes over the crowd. Federal Reserve media blackout period ahead of the June 16th policy decision, The hush grows quieter. By the way, futures markets are now pricing in a 7% probability of an increase being made to the Fed Funds target rate, which in my opinion, greatly exaggerates the likelihood of such an increase. That said, my point is that we are now entering the quiet season. JP Morgan (JPM) will report on July 13th along with the other big banks. Point is that between here and there, bunched earnings releases will be few and far between.

This (Monday) evening happens to be one of those nights. We'll hear from Coups Software (COUP) , Stitch Fix (SFIX) , Vail Resorts (MTN) , and Action Alerts PLUS name (and former Sarge fave) Marvell Technology (MRVL) . I think we should take a look at Marvell going into the digits, so, let's take a look at that name as I had been in it, and among this group, it is the one that I would still consider. Let's get after it, shall we?

Of the 26 sell-side analysts that I can find that cover Marvell, consensus for earnings per share seem to be for $0.27, which compares to $0.18 for the year ago period. Revenue generation is broadly expected to print at a rough $817.1 million, which would be annual growth of 17.8% if realized. The range of expectations appear to run from an even $800 million to about $823 million. Adjusted gross margin is expected to land at 63.1% which would be down from 63.9% sequentially, but up from 62.8% a year ago. Going into this report, there has not been a lot of activity seen among these analysts. Over the past three months there have been two upward revisions as well as four downward revisions made to EPS expectations with 20 analysts making no change. As for revenues, six analysts have increased projections, with perhaps the same 20 staying out, with zero downward revisions.

The investment thesis behind the Marvell story is based mostly upon the 5G infrastructure build-out/upgrade cycle that will over time only expand. Marvell, the stock, has really been trading sideways to lower after peaking above $55 in January. That's a key reason why I exited the name in the first place. That said, I still see the story, and I still like management's aggression. The firm has been busy acquiring growth or growth support wherever it has been able. From Cavium to Aquantia for help in Ethernet connectivity, to Avera Semiconductor for help in developing networking and telecom equipment leveraged to 5G. Then there is Inphi, which was just closed upon in April. Inphi produces high-speed analog and mixed-signal semiconductor components, as well as optical subsystems to cloud and telecom providers.

Lastly, Bank of America five star (which does not do him justice, he's a highly rated five star) analyst Vivek Arya, when talking about semiconductor stocks in mid-May, and discussing names with high "growth visibility", mentioned Applied Materials (AMAT) for equipment. Mentioned Nvidia (NVDA) for computing. Both of these are current Sarge names. Vivek also named NXP Semiconductor (NXPI) for automotive, Marvell for 5G infrastructure, and Qorvo (QRVO) for 5G smartphone exposure.

Marvell is a bit expensive at 36 times forward earnings, which puts the stock in line with Advanced Micro Devices (AMD) , but less expensive than NVDA. Then again, MRVL is in a potentially lucrative spot for growth moving into 2022 and beyond. 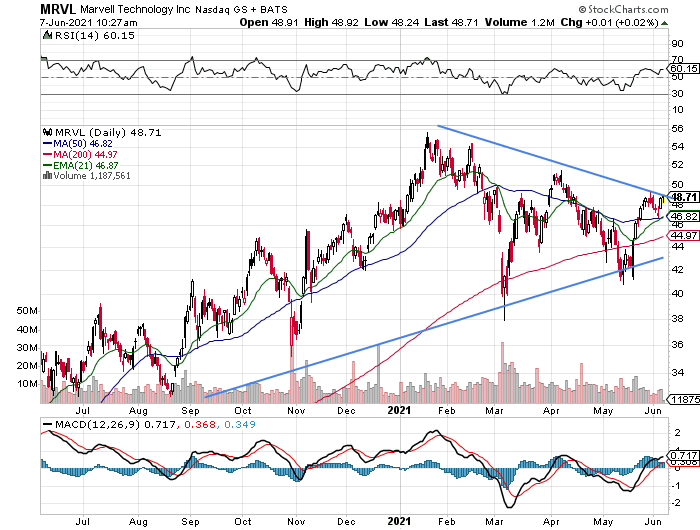 Going into tonight, these shares appear to be trying to break out of the closing flag, pennant, symmetrical triangle, whatever you want to call it... to the upside. MRVL currently trades above all of the moving averages that I think really matter, but have done this without becoming overbought, or creating an excessive looking daily MACD. The shares could break out a little, without even creating a new high for the year.

Here's a plain vanilla approach to gaining equity exposure to MRVL at a discount. The stock does pay a small dividend but that is certainly not a reason to buy the shares. If you buy these shares, you are investing in growth potential going out six to 18 months.

Notes: Taking in premium through writing the put reduces effective entry price (net basis). Worst case? Stock goes lower, but at least the investor has carved $2.35 from his or her outlay. Best case? The investor is called away at $60 in January, this punching in with 29.4% profit for half a year's work.

Get an email alert each time I write an article for Real Money. Click the "+Follow" next to my byline to this article.
TAGS: Investing | Stocks | Technical Analysis | Trading | Semiconductors & Semiconductor Equipment | Technology | Analyst Actions | Earnings Preview