Some of the landscape has begun to change in the electric vehicle (EV) sector as the group is no longer rallying on what appears to be good news from NIO (NIO)  . We're bound to see these tectonic shifts occur in a group with so much momentum. If you are in the buy and hold group, then you almost need to remove the stocks from your screen, otherwise, these will remain in the trade only category.

I don't think the group is dead, but the change of character today is noteworthy.

In terms of buy and hold, I think picks and shovels are the way to go right now. The projection for demand is unlikely to change. The need for lithium is only likely to increase. Rather than only bet on who produces the most popular vehicle or who holds the highest profit margins, I would consider going to the source of the batteries. The top two plays on my screen are Lithium Americas (LAC) and Piedmont Lithium (PLL) .

Piedmont Lithium caught fire after a deal with Tesla (TSLA) . No pun intended. I'm focused on that $30 price level. A break above and the stock should push into the upper $30s without much resistance. A close under the 50-day simple moving average (SMA) would present a big problem for the bulls. One could key on the 21-day SMA instead.

While I like this name, the technical picture worries me. We have lower highs in both the Full Stochastics and MACD. Bearish divergences are not exactly what we need to be chasing in this market. Additionally, the parabolic stop-and-reverse (PSAR) is also bearish. It may seem odd to say this one is on my screen, I want to own picks and shovels, but I'm not pounding the table to buy it. Over $30? Sure. Here? Hold. We push much lower and I'll wait for $22 to $24, but I would look to buy in the low $20s. 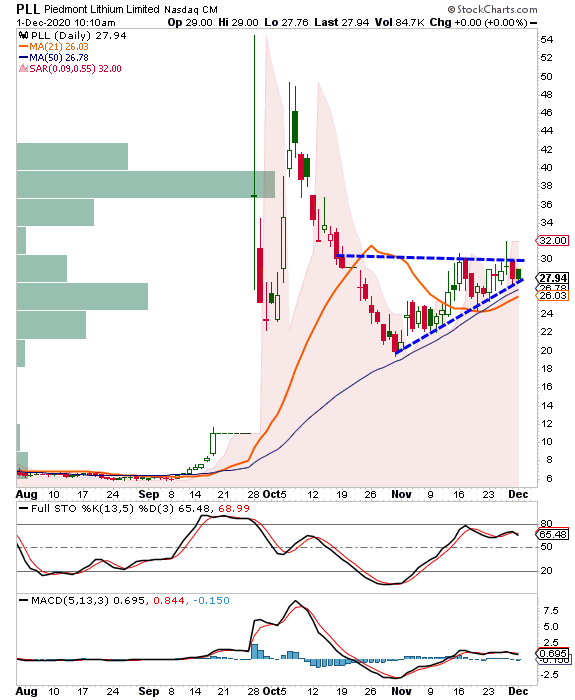 Lithium Americas is my preferred play with mines both in Nevada and South America. It should wind up being one of the lowest cost producers of lithium. The technical picture here is also neutral, but a stronger neutral. For Dungeons and Dragons fans out there, we can call LAC Neutral-Good and PLL Neutral-Evil. 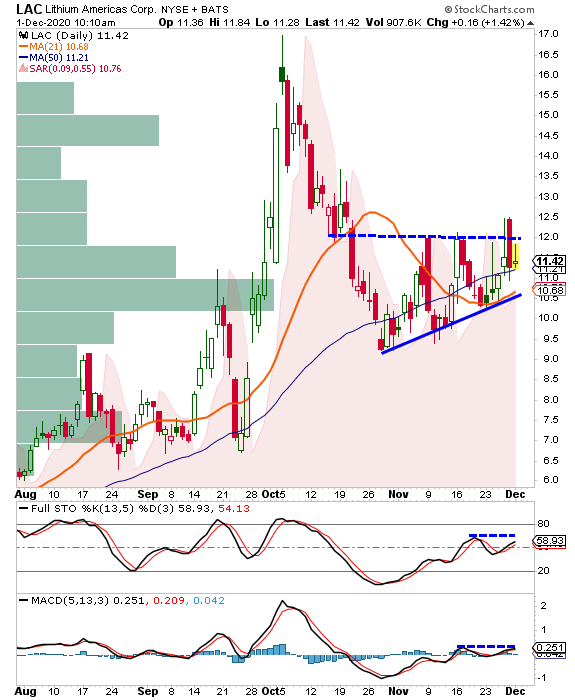 A close over $12 should bring a quick test of $12.50, but I expect this one would continue to $13.50 before encountering more aggressive selling. The 21-day SMA and 50-day SMA are both inside the ascending triangle pattern unlike PLL. A close under $10.50 should stop a trader out of a long position until the stock successfully retests the $9.00-$9.50 range or close above $12.

We don't see the same bearish divergences in the secondary indicators. PSAR is bullish while both the MACD and Full Stochastics resemble price action. Based on the driving factors of the technical position, this is the one I want to own right now, but I'll keep PLL on the radar.

Get an email alert each time I write an article for Real Money. Click the "+Follow" next to my byline to this article.
TAGS: Investing | Stocks | Technical Analysis | Trading | Electric Vehicles

Kroger Chopped to 'Sell' by Fundamental Analyst, but What Do the Charts Say?

Let's update our technical strategy for the supermarket giant.

I expect GRPN will disclose more about its stake in privately held SumUp.

Here's my strategy for the stock.