Just a scan of what used to be the kitchen table, and now passes for a staging area of my family's strategic reserve that had been built, and maintained in the days ahead of enforced social distancing as it became obvious that the crisis of public health in our area was quickly becoming serious.

I see neatly piled stacks of instant oatmeal, Life Cereal, and a bevy of products bearing the "Aunt Jemima" brand name. I see "Pasta Roni." I see "Rice a Roni." I see the remains of what was a 40 pack of "Doritos", and I see what's left of the "Mountain Dew" stash. Then I see the Lipton Iced Teas.

I only lay claim to some of the breakfast foods and the iced tea, but every thing on that table is somebody's favorite. What those brands all have in common is PepsiCo (PEP) . Yes, we have plenty of ConAgra (CAG) , Campbell Soup (CPB) , and Hormel (HRL) products as well. Yes, Lipton is really a Unilever (UL) brand, but the ready to drink stuff in a cooperative effort with Pepsico, but my guess is this: Most folks did not realize just how much of a "shelter in place" play that PepsiCo really is.

PepsiCo reported the firm's first quarter performance on Tuesday morning. Adjusted EPS hit the tape at $1.07. That number beat consensus, and was good enough for earnings growth of 10.3% in a quarter where S&P 500 earnings in aggregate are trending -15%. Revenue land at $13.88 billion. This was also a beat, and good enough for year over year growth of 7.8%. The firm understands that there was a rush in this kind of nervous consumer demand. If you have been in a grocery of late, then you know just by the empty shelves that either demand remains elevated, or demand has become constricted... or both. The firm pulled its financial outlook for the rest of the year, which makes sense.

Make no mistake about PepsiCo. This is in my opinion, a very well run company, and along with the consistent return to shareholders, are reasons for my continued long-term investment in this name. You want to talk consistent? Check out sales growth across the various business segments of this firm.

PepsiCo Beverages North America remains the largest unit, at sales of $4.838 billion, which was growth of 7%. Frito-Lay, is the other "giant" at sales of $4.07 billion, also 7% growth. Down the line, Europe grew 14%, Latin America grew 6%, Quaker Foods North America saw sales increase 7%, Africa, Middle East and South Asia up 9%, and Asia Pacific, Australia, New Zealand, and China up 6%. Knocking the cover off of the ball? No, you can not really say that. Excellent corporate execution? Yeah, I think that's probably an accurate way to put it.

Not just did PepsiCo close on the $3.85 billion acquisition of Rockstar Energy, the company also this morning, announced the signing of an exclusive U.S. distribution deal with Vital Pharmaceuticals, the maker of Bang performance energy drinks. Think that's not important? One thing I have noticed over the years is that these "energy drinks" are to younger folks what coffee is to us older types. It's really incredible.

I noticed it when I was still serving. The greatest thing in the world when out in the field in horrible weather was the sight of a senior NCO pulling up in a Jeep (or HumVee for the kids) with one of those big green Mermite containers filled with scalding black coffee. Everyone would dig out their tin cups and try to get some while it was still hot. Over time, I noticed that the line grew shorter. It was just us old guys. The kids? They had their "Monsters" and some of the other brands squirled away in their rucks. If that Mermite never showed, the rest of us were left chewing coffee grinds in the effort to squeeze out some caffeine. Oh, that stash now in my kitchen. It has two cases of energy drinks that aren't mine, and magically never runs out.

What To Do With The Stock?

I touched on PepsiCo in the Monday edition of Market Recon. From the looks of early Tuesday trading, I may not need that $125 panic point, at least not for now. 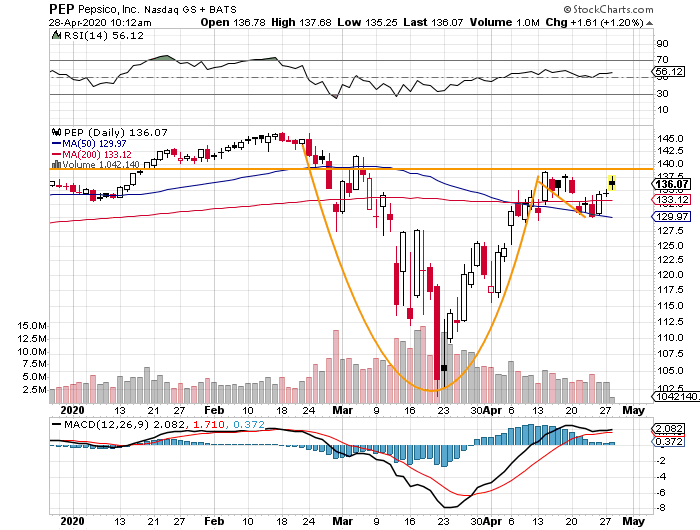 For those readers who maybe do not read my morning flagship missive, I have provided the same chart that I used for that note,with yesterday's action and today's early trading added. What we see here is hopefully a decisive move north of the 200 day SMA ($133), after the shares tested the 50 day SMA ($130) for four consecutive sessions last week.

What the shares need, and do not yet have, is the approach and hoped for break-out at the pivot, which is still $138. So, if you read me, then you already know that I have a $147 price target on PEP. That, I can not change until I am sure that a break-out is under way. This remains "to be determined."

Note: A take and hold of the $138 pivot allows for significant upgrades to be made to both my target price and panic point. Should traders see this action the new target price would probably be close to $165. The caveat? Pivots can prove effective resistance just as much as they can provide acceleration.

Get an email alert each time I write an article for Real Money. Click the "+Follow" next to my byline to this article.
TAGS: Earnings | Economy | Investing | Stocks | Technical Analysis | Trading | Beverages | Food & Drink