The game of heads I win, tails I win is strong with analysts this morning in regards to Netflix (NFLX) . How do you do it? Easy. Maintain your rating, but change your price target. Check these out:

Bernstein lowers price target from $450 to $422 while maintaining Outperform

Guggenheim lowers price target from $420 to $400 while maintaining Buy

Cowen lowers price target from $435 to $415 while maintaining Outperform

BofA lowers price target from $450 to $426 while maintaining Buy

Bernstein lowers price target from $450 to $422 while maintaining Outperform

Now, if the stock goes higher, you have Buy/Outperform/Overweight weighting to point to down the line. If the stock pulls back, you can always argue that lowering your price target reflected some upside concerns. Does it matter that your price target is still 20%, 30%, or 40% above today's open? Heck no, not to you the analyst it doesn't.

Not every analyst followed this formula, but it is interesting to see those with a neutral/market perform rating, often viewed as a negative, raise their price targets while more bullish analysts lowered their targets. It's a game of optics among analysts when it comes to the big name, heavily followed stocks like Netflix. There's not a single thing you can draw from the ratings or price target from them as a group.

As of this summer, the analysts with the high $300, low $400 targets had been on target, but as competition continues to rise, it's the Wells Fargo, Nomura, and Rosenblatt analysts with the correct targets. Unfortunately, Wells Fargo just came online with coverage three weeks ago while Rosenblatt's Neutral call in April may have been a bit early but played out well.

I'll admit I wasn't blown away by the numbers, but sentiment surrounding Netflix has been overwhelming negative as of late. With stiff competition approaching this November from Disney (DIS) and Apple (AAPL) dipping a toe in the streaming wars, along with seemingly every other media company on the planet, it's easy to understand why. Last night's results seem to support the idea that rampant domestic sub growth is in the rearview mirror. Still, results appear to have hit better than our expected disappointment. Additionally, Netflix continues to expand internationally.

Now, investors need to ask themselves whether sub numbers growth, cash burn, or profitability matters most. We know domestic subs in Q3 were light and Q4 won't get better, but remember Netflix did push pricing higher. Even tepid sub growth should be offset by a higher revenue per sub number domestically. I'm not sure how many investors want to hang their hat on an international growth story just yet. Netflix does appear to be offering more and more content aimed at the internationally viewing audience rather than simply dubbing existing content into a foreign language. I believe that will pay off well over the next five years.

However, here are the problems I see. If Netflix isn't about sub growth, then it will be about free cash flow (it doesn't have any) and profitability. It has the latter, but we can't argue the company is cheap, especially when compared to other content providers and competition coming online. Burning $3.5 billion in free cash flow will start to sting eventually. The company has stated they are committed to improving this in 2020, so they bought themselves another quarter to kick the can down the road, but if competition continues to weigh on sub growth or churn increases because competition is coming online at a much lower monthly cost, then I don't see how the company will dig itself out of the free cash flow hole any time soon. 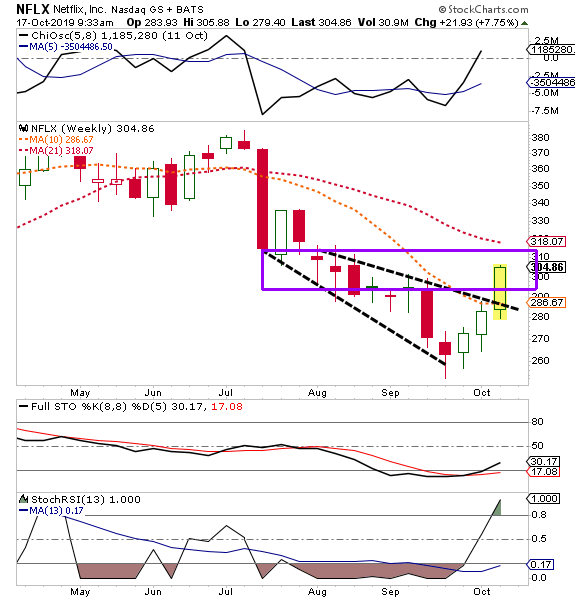 As bulls enjoy the oversold sentiment bounce on Thursday, traders want to watch price action closely. This move pushes us $50+ off the September lows, but on a weekly scale we aren't overbought across the board. StochRSI is pushing max, but it held that level for two weeks in April, and that time period coincided with bearish action in the Full Stochastics. We don't have that now. In fact, we have a bullish crossover in the Full Stochastics. If I weren't long already, I wouldn't chase. I see $310 to $318 as the resistance area. Should we push above those levels, then I'd consider a long side look to $330-$340. As as long Netflix remains above $290-$292, bulls should have control. A move to $360 is possible, but I believe we'd need consolidation in the $300 to $320 range for that to happen, essentially forming an inverse (bullish) head and shoulders pattern.

Overall, I wasn't blown away by these numbers. Seeing Netflix retrace half the gap wouldn't surprise. Heck, I won't be surprised if it goes red. I'm not a buyer, but I'll respect the stock should it prove me wrong and push above resistance.

Get an email alert each time I write an article for Real Money. Click the "+Follow" next to my byline to this article.
TAGS: Earnings | Investing | Options | Stocks | Technical Analysis | Trading | Digital Entertainment | Movies | Stock of the Day