Your pal had been long CVS Health (CVS) . Your pal decided to reduce. Then your pal decided to vacate the name completely. That was in late-ish March. That last sale looked pretty good for most of April. Probably should have hung on to at least some of those shares.

On Wednesday morning, CVS put the firm's first quarter results to the tape. It was a good quarter. In adjusted terms, the firm beat expectations for EPS at $1.62. At revenue of $61.65 billion, the firm not only increased sales by 34.8%, they beat industry projections by more than a billion U.S. dollars. The firm performed well across a number of metrics. The revenue growth might be a little deceptive to the uninitiated. Remember that CVS completed the acquisition of the Aetna insurance business back in November, and that unit provided $16.6 billion in revenue toward the aggregate number. Still, the chain store pharmacy business did very well, posting same store sales growth of 3.8% versus the pitiful 1.2% that the analyst community had somehow expected as consensus.

Guidance was a little tricky. The firm narrowed the range for GAAP compliant earnings per share, without really impacting the midpoint. However, the firm did increase both the high and low end of the range for adjusted earnings. The market has received this morning's news enthusiastically after what has been a tough market across the entire health care sector and the less than optimistic outlook that the firm had seen for the full year roughly two months ago.

This stock is undeniably cheap at less than 8 times forward looking earnings. My feeling, and the reason that I sold it, is that this space is under seemingly never-ending political pressure. Drug pricing has been a common pinata for both sides of the aisle. The president and leading Democrats both love to bash big pharma. For those in the health insurance business, the pressure will come from left leaning candidates for president that see a one-payer system as the future of health care management. While I see this step toward socialism as a negative, there is significant support among younger people in particular for such an idea. It will not be easy to reflate stocks like this. This firm is still a cash flow machine, and the further integration of the Aetna business should not only produce synergies from a business perspective, but also allow through the increased use of the firm's tech platforms, a personalized style for health care management that reinforces customer loyalty. Let's take a look at the stock. 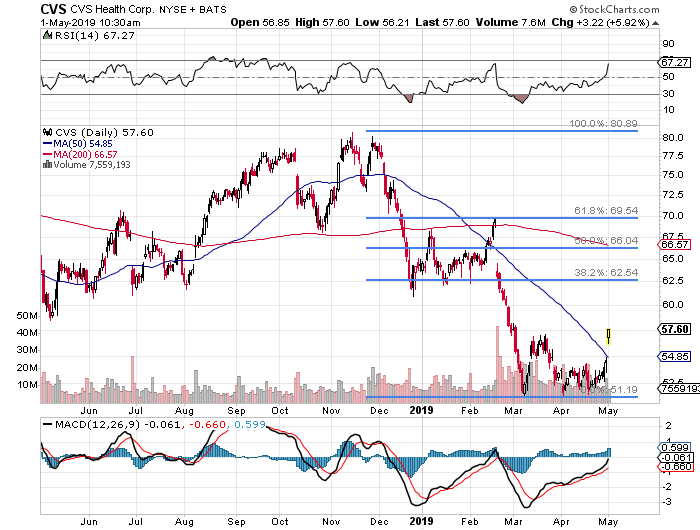 If I were still long this name, I would have no problem targeting the 38.2% retracement line off of the November through March selloff. Some items of note.. That bottom around 52 has provided significant support three times now. Knock on a door three times. If it doesn't open, most people walk away. The 50 day SMA. A lot of fund managers are creepy about the 50 day line. They act when they see that line crossed. That can mean that you see a little "giddy up" in a stock such as this that exacerbates momentum at that time. My thought is that the market does not test that triple bottom any time soon, but will likely retest this blue line. Go back and look at that chart. Nearly every time the share price passes through the 50 day SMA, it comes back and kisses it good-bye before moving on.

So, technically, I would like to own a few shares of CVS, but at 54.85. That ship has sailed. I can wait, and hopefully, the shares trade there at some point in the short term future, or ... (in minimal lots)

This trade provides the investor with a net basis of $54.17, while setting up a max profit of 10.7% over a five moth period. Another way to try to get this done would be to... (in minimal lots)

This will provide the investor $127 up front, more than enough for a nice dinner with the significant other, while if ever exercised would land the same trader a net basis of $53.73

Get an email alert each time I write an article for Real Money. Click the "+Follow" next to my byline to this article.
TAGS: Earnings | Investing | Markets | Options | Stocks | Technical Analysis | Trading | Healthcare | Pharmaceuticals | Stock of the Day

To Divine the Direction of the Markets, Let's Go to California

For some reason, the fortunes of the Nasdaq 100 and interest rates have become intertwined.

To Invest or Not to Invest in AT&T? Traders Can Move On

AT&T is definitely a different company than it was, and will continue to evolve into mid-2022.