Kinda ugly? Before we begin, I'll let you now where my bias is. I am long Palantir Technologies  (PLTR) . I bought more last night after the close after it sold off. I bought more very early this morning after the stock had sold off some more, but before the firm reported its first quarter financial performance. I have been building this position since late February. Some might say I am wrong and long. I've been "wrong-er." Fact is I am still only about a third of the way into building this position, so I don't mind the fact that this name has been weak itself as sector weakness has exacerbated the downward momentum. Bottom line: I am not worried yet, but I am not a fool. (I don't think.) I do have to protect myself. Let us discuss.

For the reporting period, data integration and privacy protection software company Palantir reported adjusted EPS of $0.04, which was in line with estimates. Stripping out the agistment, which was for stock-based compensation, the firm reported GAAP EPS of $-0.07, beating the street by a penny. Revenue generation of $341 million not only beat consensus, but was good for year over year growth of 48.7%. Revenue growth seems to be accelerating again after appearing to slow down a bit during the fourth quarter. U.S. based commercial revenue increased some 72% over last year, while U.S.-based government revenue increased 83%,

Q1 adjusted operating margin of 34% easily topped the firm's own guidance of 23%. Cash flow from operations amounted to $117 million, up $404 million from Q1 2020. Adjusted free cash flow came to $151 million, up $441 million over that same year. Average revenue per customer increased to $8.1 million, up sequentially from $7.9 million. At last count, the firm has 149 customers.

As for the balance sheet, Cash is up a bit, dragging total current assets with it. Current assets dwarf current liabilities. There is no entry whatsoever for goodwill. We appreciate that. Non-current debt remains stable and rather small relative to other firms in the industry, as well as to the firm's own cash position. The balance sheet is solid.

For the current quarter, the firm expects to drive revenue generation of $360 million, which would be an increase of 43% over Q2 2020, The firm again expects to see adjusted operating margin of 23%. For this full year, Palantir sees adjusted free cash flow in excess of $150 million. In addition the firm has reaffirmed its expectation to see annual revenue growth of 30% or more for every year from 2021 through 2025.

Why the overnight selloff into the early morning in Palantir given the numbers were pretty decent? One thing I can think of is that the "whisper" number for adjusted EPS was up around $0.06. The other is just valuation. The shares trade at about 130 times forward looking earnings. So, the name is not for everyone. This stock is also the 17th largest holding (of 58) in Cathie Wood's ARK Innovation ETF (ARKK) , and we all see what has happened there. So, the stock is expensive and out of favor. That said, since I started typing out this piece, the shares have come back a long way. 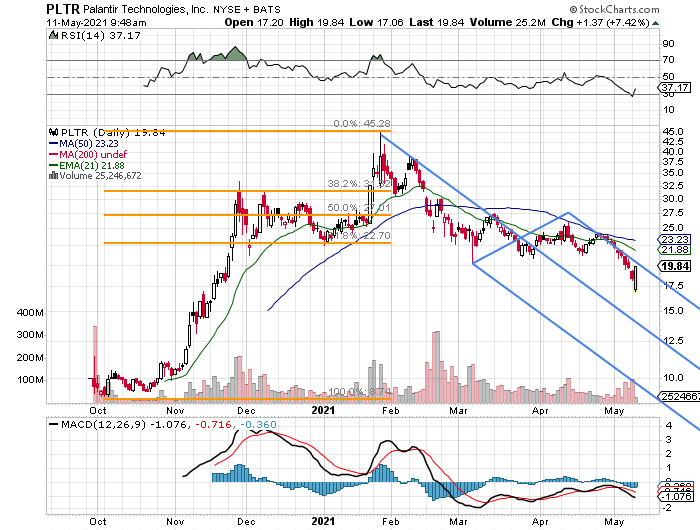 I added that tranche last night at $18.49, and this morning's add was a steal at $16.47. Still, my average price stands at $21.63, so I am still down 8%. As readers can see, the shares are rebounding off out of a technically oversold condition. What we would love to see would be the share price break out of the top trend line and out of the upper chamber of this pitchfork model. Basically, though I am trying to build a long-term position in this name, I see that trend line ($20) as my short-term pivot. That would give me a $25 target price for trading purposes.

Are you not long? I think that the name can be bought down here, but I would prefer to wait to see if this rally fades. Are you long like me? The August $25 PLTR calls are still paying about $1.10. Might be ripe for net basis reducing sale? Just an opinion.