It was a Thursday. I was up and at them early that day. I remember it well. Usually get to my desk and start writing Market Recon at 03:30 on weekdays. That day, I was at the ready by 2 am so I would have enough time to prepare for what I knew would be a busy day. I did one of the financial TV pre-opening shows that day. Two IPOs were top of the news. A profitable unicorn, Zoom Video (ZM) , and a social media platform, Pinterest (PINS) . I had done my homework. Upon interview, I told the anchor that I was likely to get involved in ZM once it opened, and that PINS held little interest for me.

Long story short, both stocks opened late that morning. ZM had been priced at $36, then opened at $65. I walked away. PINS? That one opened at $23.75 after being priced at $19. Figuring that maybe PINS might get caught in a positive undertow, I bought that opening and sold it less than two weeks later. That was a trade, and a good one. I did the opposite of what I had told the anchor that morning due to the mis-priced Zoom offering. ZM was an opportunity to invest, and I walked. Is this name still somewhere to put my dough? Let's think about this.

A couple of other notable items. Cash and cash equivalents have grown to $629 million, supporting total assets of $999 million up from just $354 million in just three months. That's largely due to the $543 million raised at the offering. Still, net cash provided from operating activities amounted to $22.2 million for the quarter, up from $2.8 million sequentially. The firm now claims 405 customers that have contributed $100K or greater over the past 12 months. This itself is growth of 120%. Gross margin is now up to 80.9%.

There certainly is a need across corporate America for better cloud based remote conferencing. I can't begin to tell you how dissatisfied I have been with some unnamed competitors back when I used to work for other people. The total addressable market for what this firm does is believed to have growth potential of up to $43 billion by 2022 if you listened to CEO Eric Yuan. I see some reiterations of "buys" and "holds" this morning, but not a tidal wave of increased target prices. Five star rated Alex Zukin of Piper Jaffray did take his target from $90 to $100, but most of the industry is now below the last sale.

I would like to own a piece of this firm. The problem for me is the short position. At last count, something close to 30% of the float was held in short positions. The stock price was up about 20% from last night's close. A lot of that has to be, in my opinion, some of these shorts taking their lumps. 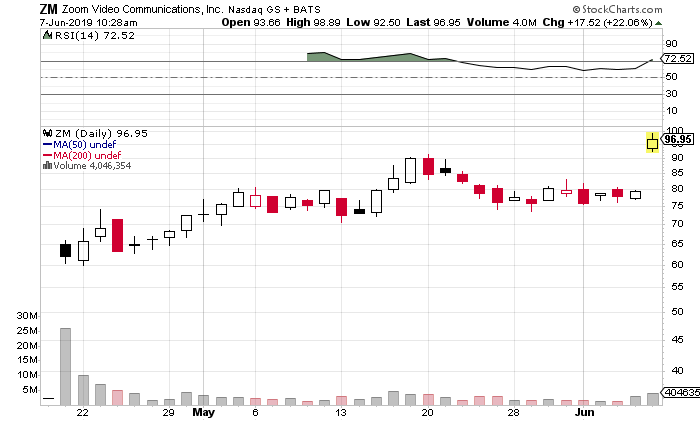 The chart does not tell us much more than that these shares are likely overbought this morning. I have a few ideas, for crowd that wants in and doesn't just pony up for the equity amid a positive response that includes a probable short squeeze. All trades are expressed in minimal lots.

Note: Here, at least the investor is in the equity game, for better of worse, with a cap on profit until August in order to provide a lower net point of entry.

Note: Investor takes on potential exposure to downside equity risk in order to try to make a quick $555.

Get an email alert each time I write an article for Real Money. Click the "+Follow" next to my byline to this article.
TAGS: Earnings | Investing | Options | Stocks | Trading | Media | Technology | Telecommunications | Stock of the Day

If you own the stock, here's what I suggest you do right now.

SoFi Technologies Could Fall Further in the Weeks Ahead

SOFI's technicals have not gotten the message from the fundamentals.

Here's how we would play RL stock now.