Allow that part of the brain that one usually ignores to work for a minute if you will. The part that appreciates beauty, regardless of circumstance. Have you ever been at sea during a storm? Have you ever witnessed a "top of the food chain" predator on the hunt, unsure if you were on the menu? Have you ever watched a top five economy in terms of nominal GDP try to stay on it's feet as other "top fives" inflict harm not only upon each other, but upon themselves?

You may recall that the export driven German economy had contracted q/q in Q3 2018. We will not see official fourth quarter data until next month, Germany's Federal Statistics Office posted it's preliminary number for full year 2018 GDP this morning as you buried that ugly thing atop your shoulders in your pillow. At growth of 1.5% for the year, the German economy grew at the slowest pace since 2013, but the implication, which is a far more significant takeaway would be that the engine behind Eurozone growth did not fall into recession in late 2018. This had been a real concern as German Industrial Production has printed in the hole in four of the last six months.

Out of the woods? Not even close. Germany, like China, depends on the manufacture and export of goods. To the U.S. To China. To the UK. Hmm, this would appear to be a story in need of further development. Stay tuned. If you're thinking ahead, the ECB meets on policy next Thursday morning, January 24th.

The Forest For The Trees

That is, until economists can't explain the failure of the Phillips Curve to work as it does in the textbooks, or as it had in the past. The Phillips Curve for the new kids is the thought to be already established inverse relationship between the level of unemployment and the rate of consumer level inflation. The Federal Reserve Bank of San Francisco released a paper on Monday examining the relationship between very tight labor markets and wage growth, or the lack thereof in any significant way. Riveting stuff? More interesting than Louis L'Amour on a rainy Sunday afternoon.

Actually, I found the paper fun to read. The gang in San Fran came to the conclusion after six pages that they "do not foresee a sharp pickup in wage growth nationally if the labor market continues to tighten as many anticipate." I'll spare you all the details, but somehow, nowhere in the paper is the deflationary impact of e-commerce (Think Amazon (AMZN) ) mentioned, nor is automation at the manufacturing level. Call me kooky, but I clearly expected a serious paper on the topic to at least discuss deflationary impacts on the general economy as a factor.

At least, according to the latest data that I have, the BLS reported December hourly wage growth at 3.2% y/y, and 0.4% m/m, coupled with an unemployment rate of 3.9%. That same BLS reported headline December CPI at 1.9% y/y, and -0.1% m/m. The core rates were 2.2% y/y, and 0.2% m/m. Wait, what are you saying, Sarge? Well, you better sit down. The point is that while I can't promise continued strength in demand for labor, that in real terms, at least statistically, there is wage growth in aggregate. For now, the average kid might be in a defensible position. Labor markets slacken at all, and there will not be much room for error. The San Francisco Fed? Go, read an interesting book, gang. This is not that hard. Just have to think beyond the box a little.

Health Care took the worst beating of any sector grouping on Monday. One risk that we, as shareholders knew was out there, came to pass. Political risk. Rep. Elijah Cummings of Maryland, who chairs the House Committee on Oversight and Reform, sent letters to a bevy of pharmaceutical companies requesting information on pricing, research expenses, and strategy related to market share. What this means is that House Democrats have launched an investigation into 19 drugs involving 12 companies. According to Investors Business Daily, representatives of Amgen (AMGN) , Johnson & Johnson (JNJ) , Sanofi (SNY) , Eli Lilliy (LLY) , Teva (TEVA) , and Pfizer (PFE) had all confirmed having been in receipt of said letter.

I am not even going to attempt to tackle the merits of such an investigation, or if there is even anything to look into. The point that I think investors need to understand is this: This space is one where the Democratic leadership in Congress, and the President of the United States appear to have common ground. I am long several pharma names, including two of the above mentioned. Do we have to run for the hills? Not necessarily. That said, dividends are a must, as is some kind of hedging or at minimum a reasonable strategy for net basis manipulation.

Living On The Edge

As regular readers are likely aware, I am currently playing Netflix (NFLX) from the short side. Dangerous? You ain't kidding. I receive questions from readers on this position every day. My thought is that some folks are also short the name, and feel some sense of safety in numbers. Don't. This name is a beast, and the firm will report quarterly results this Thursday afternoon. Expectations are for EPS of $0.24. If realized, this result would show -41% performance year over year, and -73% quarter over quarter. Consensus view is for revenue of $4.21 billion. That number would be good for year over year growth of 28%. That is my point, exactly.

Netflix is expected to have spent $13 billion on content for the full year of 2018. They have to, in order to out bid the rest of the industry for shows. This is what drives subscriber growth, and that is what - to this point - has driven share price. Not the fundamentals. The fact is that the competition for the streaming customer has only just begun. Currently, just Hulu and Amazon Prime pose a significant threat. The Walt Disney Company (DIS) , Apple (AAPL) , and AT&T (T) are all expected to soon raise the stakes, and in the case of Disney, the firm is already king of content. Oh, did I mention that Alphabet (GOOGL) is also a player in the space through YouTube, and that even Walmart (WMT) has expressed an interest in capturing some of these eyeballs.

My thoughts are this. Margins are going to be thinner. Operating Margins should print around 5% on Thursday. That will be down from more than 7% for Q4 2017, and 12% for Q3 2018. The cash burn is real. The firm borrows in order to spend all that dough on content. Total debt is growing as fast as is cash and equivalents. Can the firm maintain that pace in an era of rising competition? Does that competition, owner of a bevy of desirable content withhold that content as contracted obligations terminate? Or maybe they just extort more cash from Netflix? What if interest rates continue to rise? According to the Financial Times, Netflix has spent $291.6 million on interest payments alone over the January through September period of 2018. That number is more than the 12 month total of $238 million for all of 2017.

My story is this. I am two tranches into an intended eight tranches that would comprise my intended position size. That's a quarter of the way in for the mathematically challenged. My net basis currently stands at $327.73, so as of last night's close.. I was down five bucks. The stock is higher overnight. 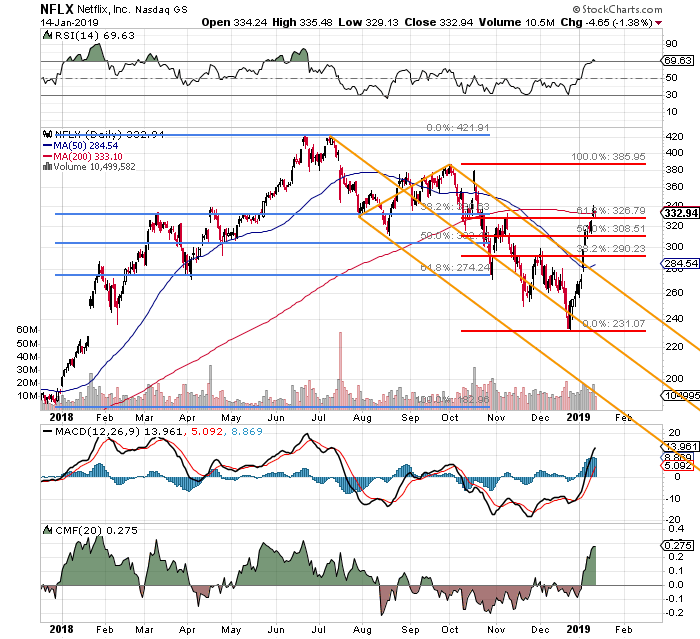 The stock has clearly gone parabolic since Christmas Eve on expectations for subscriber growth mixed with a likely short squeeze. Momentum has been gifted the name by the hit movie, "Bird Box." Perhaps the firm has found a way to better monetize events such as this where they find themselves with a blockbuster success on their hands. That may in fact be the real risk to short sellers right now... how the success of that film is discussed in the post-earnings conference call.

Technically, the name is now clearly overbought. Relative Strength, the daily MACD, and Money Flow are all at what I consider to be unsustainable levels. That said, never say never.

How To Hedge A Dangerous Short Ahead Of Earnings

First off, for those short and nervous... I am not short enough to get really nervous yet, but protection always crosses my mind... cover some. Plain and simple. I have stressed this over and over. If a position impacts quality of life, reduce said position to a size where it does not. That is known as understanding one's tolerance for risk.

Another way to reduce the risk would be to buy a call that expires after the expected news event with a strike price that the investor finds acceptable. This protection will be costly, especially in a volatile name. The only way around that would be to partially subsidize the purchase through a sale of a similarly dated call with a higher strike price. The downside of this strategy, is that it re-opens the risk at a reduced level.

Notes: Obviously, once NFLX opens on Tuesday morning, the strikes and premiums here would have to be adjusted. In this example, the traded has incurred a debit in aggregate of $8, in order to remove $25, or a net of $17 from the total loss in the event of what would be a catastrophic outcome for this trader. A fearless trader might further subsidize the strategy by selling a put at a level where the trader would be willing to accept the risk of having to buy 100 shares. That may open up a whole new can of worms, though, and that is strictly up to the individual.

Get an email alert each time I write an article for Real Money. Click the "+Follow" next to my byline to this article.
TAGS: Earnings | Economic Data | Investing | Markets | Options | Stocks | Technical Analysis | Trading | Digital Entertainment | Healthcare