In outlining his game plan for the week on Friday's Mad Money program, Jim Cramer said he'd listen to HD Supply Holdings  (HDS) when the company reports earnings tomorrow morning for a read on how small businesses are faring.

Let's see how the charts and indicators are doing in the meantime.

In this daily bar chart of HDS, below, we see a mixed picture. Prices bottomed in late December of last year and rallied to an early May peak so far this year. Prices have pulled back or corrected lower in May to retest the March lows and the flat to declining 200-day moving average line.

The daily On-Balance-Volume (OBV) line has declined the past five weeks, suggesting that sellers of HDS have become more aggressive.

The trend following Moving Average Convergence Divergence (MACD) oscillator moved to a sell signal in May and is poised to cross to the upside for a cover shorts buy signal now.

This weekly bar chart of HDS, below, is also mixed. Prices have rallied three times to the $44 to $47 area, but they have been unable to make a sustained move higher. HDS is currently testing the flat to declining 40-week moving average line.

The weekly OBV line shows a good rise from the middle of 2017, but it has stalled the past few months. The weekly MACD oscillator has crossed to a take profits sell signal.

In this point and figure chart of HDS, below, we can see a possible or potential $38 downside price target. A trade at $41.40 will be a new low for the move down. 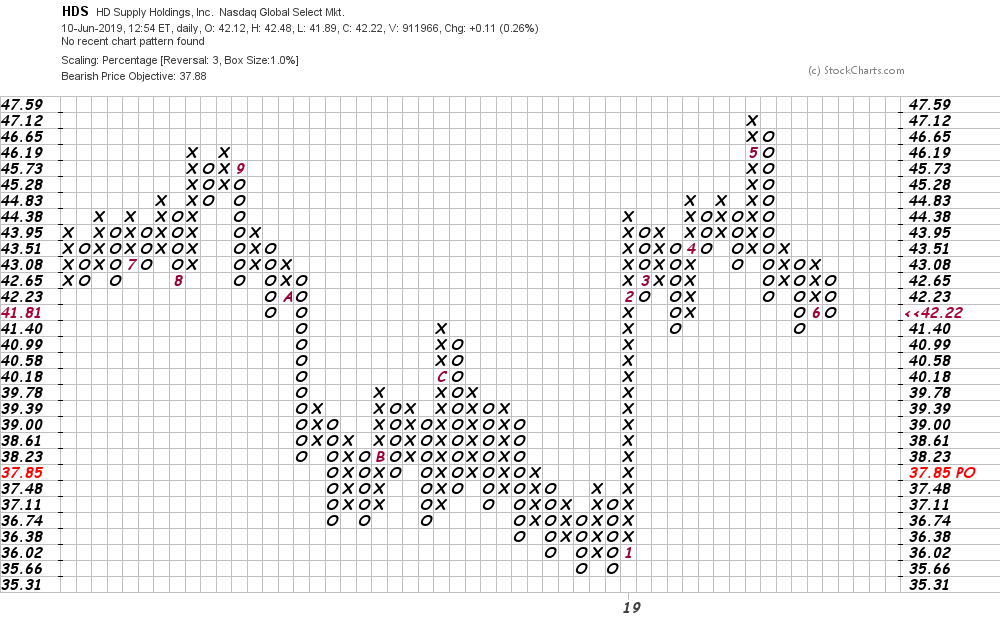 Bottom line strategy: The charts and indicators of HDS are mixed to maybe bearish. A close below $41 would turn things bearish. That is a small risk to play the upside, but I wouldn't reach for it.

Get an email alert each time I write an article for Real Money. Click the "+Follow" next to my byline to this article.
TAGS: Investing | Stocks | Technical Analysis | Trading | Industrial Goods | Mad Money

Lumber Was the First to Crack, Will Other Commodities Follow?

The inflation narrative might be flawed and the reaction to it was likely overdone.