Sometimes you find an acorn. Funny, I just wrote up a quick segment in Tuesday's Market Recon on the state of retail in response the JP Morgan analyst Matthew Boss' comments on same store sales. I focused on Macy's (M) , as that has been one of my larger, and more controversial long positions throughout the fourth quarter. I told readers that the position had been good to me, not to mention paying me to hang around, but I intended to keep hanging around through the February 5th investor day at the New York Stock Exchange even if my target price was pierced.

Even funnier, Macy's released a plethora of news on Wednesday morning. My target price is now in the rear view mirror. Decision time? Maybe. Every once in a while, an acorn actually grows into a mighty oak, but after already turning from a mighty oak into an acorn? Let's dig in.

Macy's hit the tape with some numbers on Wednesday morning. Same stores sales for November and December combined printed at -0.6% on an owned plus licensed basis, or -0.7% on a strictly owned basis. Bad right? What if reported by Mastercard (MA) Spending Pulse covering the department store category across all payment types showed performance of -18% for the November 1st through December 24th time frame? Hmm. Well, that's a horse of a different color.

I find this quote so telling. The firm's CEO, Jeff Gennette said, "Macy's performance during the holiday season reflected a string trend improvement from the third quarter. Customers responded to our gifting assortment and marketing strategy, particularly in the 10 days before Christmas." Now, I realize that this is asking a lot, but those of you (if there are any) that follow me closely in print and on Twitter may recall that I did a number of updates from the Macy's flagship location on 34th Street in NYC beginning in November. The first couple of updates might have been mildly alarming. The store, heck the entire city block was uncharacteristically quiet. The Friday before Christmas, I made my last visit. The place was mobbed. Long lines. No room to walk freely through the store. Late? Of course, but holiday shoppers had arrived once they could no longer trust e-commerce purchases to arrive on time.

That fits perfectly with what Gennette said. Perhaps capitalizing on that late part of the season is the niche where retailers with a large brick and mortar presence must make their hay going forward.

The firm also announced that it will close 29 stores, 28 bearing the Macy's name, and one under the Bloomingdale's heading. While doing this, the firm reduced headcount by 70 individuals at Bloomingdale's indicating that there could be another round of cuts next month. This action taken will remind investors that back on November 21st, when the firm reduced guidance, mentions at that time went out to One.. struggles with e-commerce, Two... weaker international tourism, and Three... weaker performance at lower tier malls. This is an attempt to address door number three. Macy's did announce this morning that the digital business is improving as well. That's door number one. As for tourism... that's a dollar exchange rate thing.

Readers already know that I have been waiting for February 5th like a kid waiting for his or her birthday. What we need to hear will be a cohesive three year strategy for growth that sounds drastically better than the last one, offered up in 2017. What I really hope I hear is a plan to capitalize on the firm's enormous real estate holdings. We hear something that ends up paying the firm something large up front with some kind of recurring revenue attached, and I think we'll have an idea. The firm reports Q4 earnings in very late February. Look for the next dividend payment to be announced just ahead of those earnings. 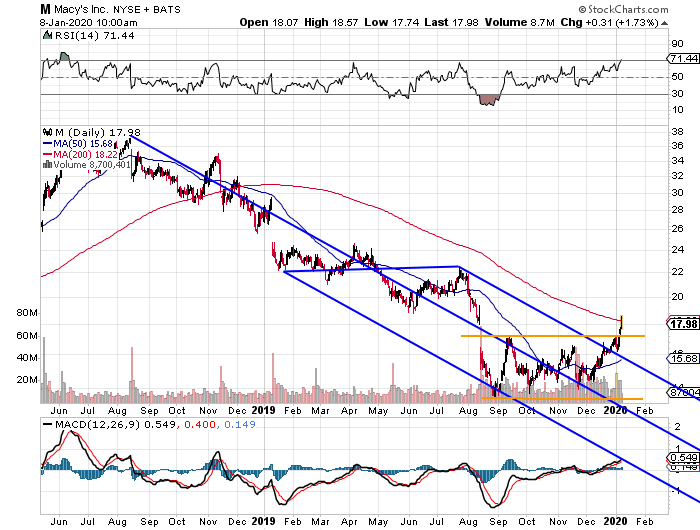 Interestingly, these shares are up, but well off of the highs. The shares have failed to hold the 200 day SMA at $18.22. I won't be concerned myself until former resistance at $17.30 is tested from above.

- Panic Point: Not selling until after Feb 5th, at least.

(Mastercard is a holding in Jim Cramer's Action Alerts PLUS member club. Want to be alerted before Jim Cramer buys or sells MA? Learn more now.)

Get an email alert each time I write an article for Real Money. Click the "+Follow" next to my byline to this article.
TAGS: Investing | Stocks | Technical Analysis | Trading | Retail | E-Commerce | Stock of the Day | Earnings Preview

Square's Most Significant Opportunity Is Still in Mobile Payments

For investors, mobile payments could represent a chance to get in early on a trend that is likely to accelerate in the future.