Halliburton (HAL) reported the firm's third quarter financial performance on Monday morning. While what we saw was not pretty, given the environment for not just the entire Energy sector, but specifically oil services as an industry, this does not come completely out of left field. The firm reported EPS of $0.34. That bottom line number printed in line with expectations, but down 32% from a year earlier and presents as a fourth consecutive quarter in year over year contraction. On the top line, the firm posted revenue generation of $5.55 billion. This missed Wall Street consensus, while hitting the tape in a state of contraction both annually and sequentially. In what is seen as possibly a case of "Not as bad a feared", the shares have reacted favorably in early Monday trade, at up more than 5%.

Breaking Halliburton's performance down by business segment, Completion and Production revenue landed at $3.5 billion, generating operating revenue of $446 million. These numbers are down 8% and 5%, respectively, from the second quarter. The firm blames lower pressure pumping activity in North America as well as pricing,  and decreased completion tool sales in Latin America. As for Drilling and Evaluation, revenue came in at $2 billion, producing operating income of $150 million. That performance shapes up at -4% sequentially on the sales line, but +3% on the income line.

Looking at performance by region, North American revenue saw a decline of 11% from last quarter, while international revenue remained flat thanks to an increase in cementing activity in the Eastern Hemisphere. Remember, this firm traditionally derives more than half of it's business in North America, meaning that weakening demand for oil services from U.S. shale producers has a pronounced impact on this firm's ability to perform.

There is some good news. the firm did not greatly expand long term debt during the quarter, nor rely on an a substantial increase in "goodwill" to balance assets versus liabilities. 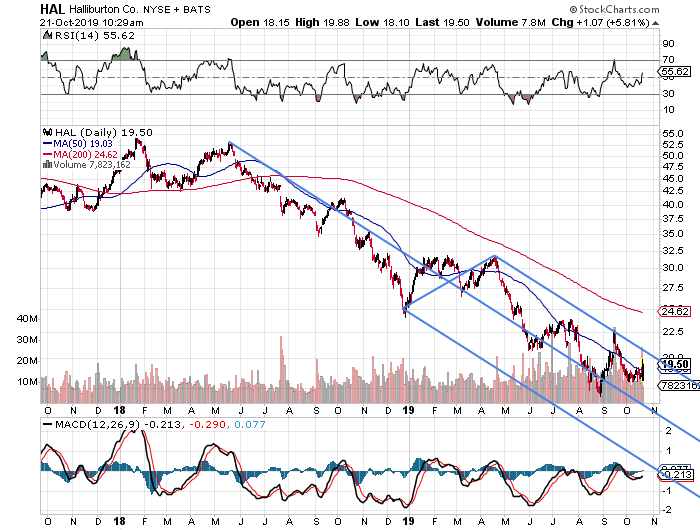 Readers will see that on Monday shares of HAL broke above their own 50 day SMA. This has caused an algorithmic reaction that currently places upside pressure on the upper trend line of a nearly 18 month Pitchfork model. My guess is that it will not take too long to find out whether or not this rally in the name is sustainable, or related to a minor short squeeze. The name does pay an annual dividend of $0.72, good for a yield of 3.9%.

Most readers know that I have never been afraid to own energy type names. Many of the names, at least the ones I hold do pay enough of a dividend yield to make them revenue providers for the buy and hold crowd. Many of these names also come with liquid enough related options markets to make for fairly easy manipulation of one's net basis.

The question now becomes one of whether or not the investor thinks that the risk is worth potential for reward at these levels. My oil services play remains Sclumberger (SLB) . Schlumberger has not performed much better over time than has Halliburton, but the market awards SLB a higher multiple (18 times FPE vs. 13 times FPE). I think that is largely due to two factors. For one, SLB, who just reported last week, runs a more globalized business, and secondly, SLB simply pays shareholders more to just stick around. SLB pays $2 annually, good enough for a 6.2% yield at these depressed levels.

(Schlumberger is a holding in Jim Cramer's Action Alerts PLUS member club. Want to be alerted before Jim Cramer buys or sells SLB? Learn more now.)

Get an email alert each time I write an article for Real Money. Click the "+Follow" next to my byline to this article.
TAGS: Earnings | Investing | Markets | Options | Stocks | Technical Analysis | Trading | Oil Equipment/Services | Stock of the Day