Out like a lamb. There is no doubt that March came in like a lion in 2020. In fact, I don't think it would be too much of a stretch to imagine that too many investors, or citizens for that matter, will mind seeing March 2020 head on out of here. We know that markets have been in correction for more like six weeks than for just one month. The S&P 500 may stand just 11% lower for the month of March after rallying 12% off of last Monday's short-term lows. Going back to mid-February, however... as Russia and Saudi Arabia began their price war in the oil space targeting each other as well as U.S. shale producers, the U.S. large cap benchmark stands 22.6% below the all-time high reached on February 19th.

It was of course not necessarily that the oil trade war by itself that would doom global economies, placing the financial markets that these economies support in jeopardy. Oil futures markets in isolation would simply become emblematic of both near complete lack of demand for energy as well as currency exchange rates gone wild due to cash driven liquidity freezes across the financial landscape requiring intervention by the U.S. central bank at a magnitude that I just do not think most people outside of economics can fully appreciate. That's all virus related.

So... good-bye to you March 2020. Word is that there will be fewer month-end/quarter-end mandated pension driven re-balancing trades this afternoon than there would usually be after the market moves that we have seen. So be it. Still hard to see at least this one driver turning negative after such a month/quarter. There has been also been some positive news of late, circling from the pharmaceutical world, as Abbott Labs (ABT) has met with FDA approval regarding their five to 15 minute test for Covid-19, and as Johnson & Johnson (JNJ) made public their hope that a vaccine candidate could be ready for early 2021.

Ahh, too optimistic you say? You may be right. In the past, April is the month that brought us baseball games that count, spring showers, and air that just smelled better. This year, we'll just replace those baseball games with weekly data for Initial Jobless Claims, and monthly data for "job creation." Oh, that should be a joy. Last week's filings for unemployment benefits took estimates for a real-time unemployment rate up 6%-ish. This week, will likely take that number up to 8% to 9%. Worst case scenarios being circulated for peak unemployment are almost un-mention-able. You'll stay home for another month. The numbers that measure both the economy as well as the spread of this virus will get worse. I promise. The sliver lining will be that we are tougher than we ever knew. I promise you that too. April showers do bring May flowers. There is light at the end of the tunnel. My mother told me these things when I was just a wee lad. My mother never lies. Understand?

Retailmageddon. Last Friday, L Brands (LB) , parent of the Victoria's Secret largely mall-based chain, announced that most of the firm's 94K store workers would be placed on leave without pay. On Monday, it was former Sarge faves Kohl's (KSS) , not a mall-based chain of department stores, announcing that the firm would need to furlough most employees at stores and distribution centers, possibly impacting a rough 85K individuals across a payroll of 122K. Kohl's was not alone. Both Gap (GPS) , and Macy's (M) , which had been a positive trade for us this year, made similar type announcements.

Laborers working across the broader retail landscape are increasingly pushed to the sidelines with restaurant workers as well as a plethora of other industry workers suffering from a government mandated cessation of economic activity at the community level. This brings me to a research paper penned at the St. Louis Fed that is now getting some attention. The study, based on what is exactly at risk during a government induced shutdown of the economy, projects the potential for a reduction to total payrolls of as many as 47 million positions. The study allows that those who drop out of the labor force are not accounted for, nor is the recently passed fiscal support package which hopefully provides small businesses enough in the way of short-term help to keep employees on the books.

All that said, the headline number... that 47 million reduction in aggregate positions, would account for an unemployment rate of 32.1% based on recent estimates for the total size of the labor force. Perhaps the most staggering number would be just how far this runs beyond the very worst levels of the Great Depression of the 1930's. Peak unemployment during the "Depression" is estimated at 24.9%.

For one, I am not at all confident that a low has been put in. We may have well seen the low for equity markets last week, I just do not know. Upon a reopening of the economy on the other side of this pandemic, just how much pent-up demand can there be? I mean, we know that everyone will feel like taking a vacation or seeking entertainment. We know that certain businesses will try to restart or at least bring back their people. Will these people have discretionary income? That said, how do markets price in what we are now going through? Do we know how bad this gets, economically, or from a public health point of view? Do we really know how long the economy will need to be shut down? Testing for the virus does help, but we are a long way from testing average people not showing significant symptomatic distress. That's how we clear the economy for take off.

Most economists that I have read this week seem to expect another 2.5 million to 3 million for this week's Initial Jobless Claims to be added to the the 3.28 million that had filed in time for last week's number. The Federal Reserve has been aggressive in easing conditions of liquidity everywhere they heard a squeak, while running the printing press at something close to full speed. Congress passed the $2.2T fiscal support package last week. Where does the Fed's balance sheet end up? Could the number rise to once unthinkable levels? Are we talking $9 trillion or $10 trillion? More? Does Congress, or let's face it... does the public need to go back to the fiscal well? Probably sooner rather than later. Without sustained help, rents, mortgages, and utility bills will go unpaid. Groceries? Medicine? These things will not be made up later by a smaller labor force making fewer dollars that may ultimately bear less purchasing power than did the U.S. dollar of just a year or two ago.

But Sarge, doesn't government spending count toward GDP? You're right. It does. I have already told you however, that this is support, not stimulus. This means that the Keynesian multiplier does not apply, or at least can not apply in the traditional sense. Most "loose money" economists count on a multiplier of something close to 1.2. That's why they see big government spending programs as a positive during "normal" times. What then if the multiplier drops below "one". What if the multiplier, due to the lack of a broadly diverse economy, or a simple lack of confidence drops well below "one"? Could we see something close to zero?

Don't get me wrong. The fiscal package just passed was necessary, and most likely... so is the next one. We can not have people starving. Just understand the pickle that U.S. and global economies are in. Debt piled upon debt will in my opinion drag on growth at some point, not grow the economy exponentially. Remember the cube I gave you a few months back that I used to describe scale? Scale works both ways.

I do not know, is what I am telling you. Neither does anyone else. V-shaped recovery? Sure would be nice. Ever have to cross a jungle swamp a few miles wide? Takes a long time. Gets dangerous, especially after dark. We may have to cross a dangerous swamp to get where we have to go.

Not good. Still better than expected. We all love our Taco Bell, and our KFC. Some of us may even like Pizza Hut. The parent firm, Yum Brands (YUM)  , across the three well known fast food names has more than 50,000 outlets, almost entirely run by franchisees in operation globally. Well, maybe not quite in operation. Roughly 7,000 of these are currently closed, and who knows how many others have been reduced to "drive-thru" or "take-out" service only?

Back in mid-March, YUM cancelled the firm's share repurchase program, while going to an existing revolving credit facility for $525 million. The firm, which is "junk-rated" made another move toward growing available cash (and flexibility) on Monday, becoming the first such firm to go to capital markets for dough since issuance of junk-rated corporate debt had ground to a halt weeks ago. Fact is that the firm had announced the intention to raise $500 million in debt maturing in 2025. Market expectations were for a yield that would land in the 9% neighborhood.

Demand was so strong, not relative to pre-crisis levels but relative to expectations, that the firm jacked the offering up to $600 million and "got away" with a yield down round 7.75%. What to watch now? Who follows YUM down this path, and who can not.

Do You See What I See? 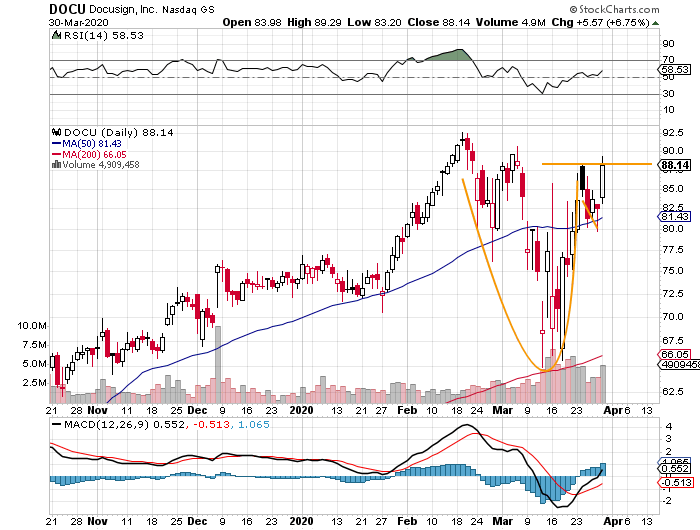 Is that a "Cup with Handle" pattern? It might be. DocuSign (DOCU) is certainly integral to the growing "work remotely" economy, an economy that I think grows into a "new normal." What could be more important in that environment than the ability to digitally sign important documents in order to execute or transact in a socially distanced ecosystem?

I'll tell you what. If this is what I think it might be, it comes with a nice looking daily MACD, and Relative Strength that looks okay as well. If this is what I think it is, we have an $88 pivot point, and the stock is now at the point where it either breaks out or fails. We see a breakout? I slap a $105 target price on this name. You dig? Just to keep it real, I'm thinking the 50 day SMA ($81) for a panic point.

(Abbott Labs and Johnson & Johnson are holdings in Jim Cramer's Action Alerts PLUS member club. Want to be alerted before Jim Cramer buys or sells these stocks? Learn more now.)

Get an email alert each time I write an article for Real Money. Click the "+Follow" next to my byline to this article.
TAGS: Drug Approvals | Economy | Investing | Jobs | Markets | Stocks | Technical Analysis | Trading | Biotechnology | Retail | Coronavirus