Is that number real?

What were they looking for?

How did Solomon pull that off?

How old are you?

The Empire and a Kid Named Douglas

Goldman Sachs (GS) , left for dead by many... put their fourth quarter results to the tape on Wednesday morning. The firm beat earnings expectations by $1.74. One dollar and seventy-four cents! You want sales? The Empire beat revenue projections by a cool $580 million. No joke. The stock? Up nearly 8% as I bang out this late-morning piece. What is also no joke is a piece I ran across at Real Money Pro back in late December. Your pal, Doug Kass... yeah, not only did he tell anyone willing to read that he liked the banks going forward, but that Goldman Sachs was his top pick for 2019. Holy Toledo, Doug. It's January 16th. Nice job. Doing anything interesting for the next 349 days?

I guess the headline here would be that net interest income increased by 16% over Q3, and 10% year over year. Also huge, boring in a newspaper sense, but huge... operating expenses were reduced by 8% from the third quarter, while what the firm's provision for income taxes fell to just $170 million from the $554 million they reported on that line three months back. Trading. Everyone wants to talk trading. Okay, Goldman took a hit as fixed income trading revenue dropped to $822 million, but equity trading was hot in a rough quarter, up 17% to $1.6 billion. Did I already say, nice job?

The truth is that when you go through the list of line items that there is good and bad throughout the report. Bottom line is that book value at quarter's end stood at $207.36 per share. The last sale I see of $192.85 is still a 7% discount to that number. That's also roughly where I sold the shares in November. Too late to catch this bus? That's really what you, the reader wants to know, right?

There is a new sheriff in town. Perhaps the days of under-performance are in the past? Just listen to what Chair and CEO David Solomon had to say... "For the year, we delivered double digit revenue growth, the highest earnings per share in the firm's history and the strongest return on equity since 2009." Hmm.

What's wrong with you two? 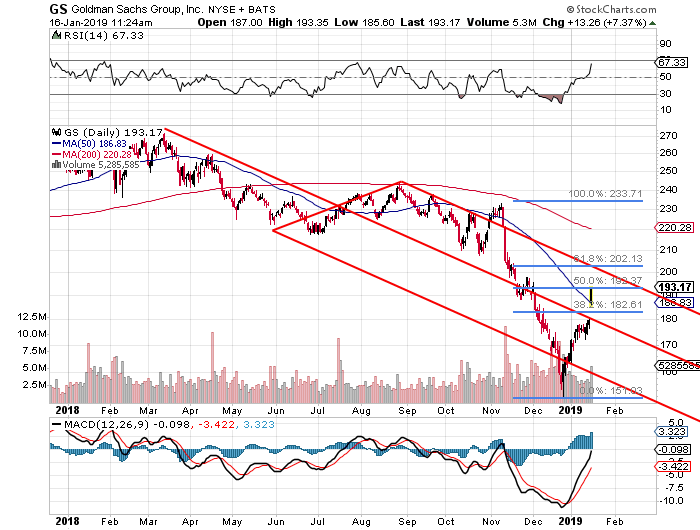 As you read this chart, you'll notice immediately that the share price is pressed up against a 50% retracement of the November through December selloff. Unlike a lot of other names that have rebounded over this time, there seems to be enough volume on the tape to consider the move more convincing than I might have otherwise thought. Long term the downward sloping Pitchfork is still more or less intact. That said, there is no reason to believe that the shares can not make a serious run at the $202 level after these earnings are digested by the marketplace. I believe that level is where the battle will be fought sometime between now and the next reporting season. Do I love Goldman Sachs? No. We missed that bus, but that does not mean that we can't try to make some dough.

Get an email alert each time I write an article for Real Money. Click the "+Follow" next to my byline to this article.
TAGS: Earnings | Investing | Markets | Options | Stocks | Technical Analysis | Trading | Banking | Stock of the Day