By BRUCE KAMICH May 29, 2019 | 11:19 AM EDT
Stocks quotes in this article: GS, AAPL
Tuesday night Jim Cramer discussed the processing payments industry on his Mad Money program. Goldman Sachs ( GS) was mentioned in a deal with Apple ( AAPL) . While there might be a lot of upfront costs, it could be the perfect way for Goldman to get into the payment processing game.
By the way, GS has one of the lowest P/E ratios in the banking industry, Cramer reminded his viewers. Let's check out the charts of GS today.
In this daily bar chart of GS, below, we can see that prices have made a small gap to the downside today as the support around and just below $190 is being tested.
Prices held that area in February and March but this time it looks like the support could give way. The slope of the 200-day moving average line is bearish and in April and May GS stalled/failed at the underside of this longer-term indicator. The slope of the 50-day average line is cresting.
The daily On-Balance-Volume (OBV) line declined into a late December nadir and only recovered slightly to April. The OBV line has slowly declined this month and suggests a slow increase in aggressive selling.
The trend-following Moving Average Convergence Divergence (MACD) oscillator has declined below the zero line for an outright sell signal.

In this weekly bar chart of GS, below, we can see that prices peaked back in early 2018. The slope of the 40-week moving average line has been negative for months and prices recently failed at the underside of this average line.
The weekly OBV line has been in a decline from late 2017 and is close to a new low for the move down.
The MACD oscillator is crossing to the downside just below the zero line for a fresh sell signal.

In this Point and Figure chart of GS, below, we can see that the software has generated a potential downside price target of $163. 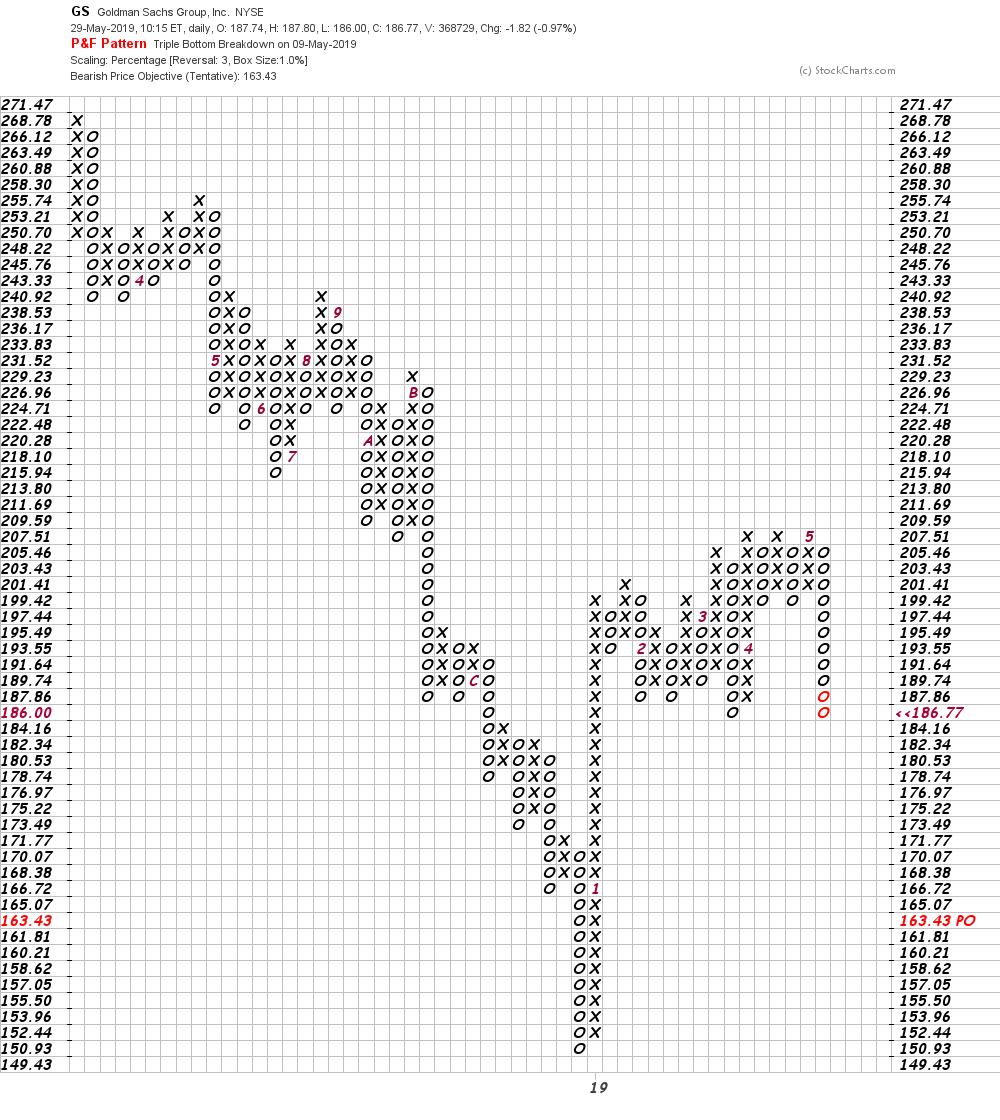 Bottom line strategy: GS and other financials look like they can trade lower in the months ahead. The Point and Figure target of $163 suggests we could retest the late December low.

(Goldman Sachs and Apple are holdings in Jim Cramer's Action Alerts PLUS member club. Want to be alerted before Jim Cramer buys or sells GS or AAPL? Learn more now.)

Get an email alert each time I write an article for Real Money. Click the "+Follow" next to my byline to this article.
TAGS: Investing | Stocks | Technical Analysis | Trading | Banking | Financial Services | Brokerages