The banks are coming, and they're coming in hard. Wall Street's preparation for the coming of first quarter earnings has put quite a focus on this Friday. Ever since Alcoa (AA) split the firm in two, creating Arconic (ARNC) , and abdicated the firm's place at the top of the order, it has been the big banks that have batted lead-off four times a year. As most of you know by now, according to FactSet, first quarter earnings across the S&P 500 in aggregate are now projected at -4.2% year over year on revenue growth of 4.7%. Broken out by sector, the Financials are expected to "outperform" on earnings at -3.8% on revenue of 4.8%.

The NFIB Small Business Optimism Index for March remains fresh in my mind. Sure, the headline number printed in line with February. That's a good thing. Once the numbers are peeled back and looked at however, there are two glaring minuses present in the survey results. Those areas would be Earnings Trends and Expected Credit Conditions. The latter of those two printing below zero yet again. I know this is a March survey, but if smaller businesses are finding it harder to borrow, then how will banks guide on loan growth? Serious question. Now, if smaller businesses have trouble borrowing, while earnings slow, then how will they hire, even though that line item as of now, shows no cracks. Then how will that impact banking on the personal level? Dicey.

Before gliding into earnings season, a number of big bank chief executives will have to climb a hill. Capitol Hill. The list is lengthy. Headliners such as Jamie Dimon of JP Morgan (JPM) , Michael Corbat of Citigroup (C) , and David Solomon of Goldman Sachs (GS) will be joined by several of their industry peers. The group that will testify before the House Financial Services Committee will include James Gorman (Morgan Stanley (MS) ), Brian Moynihan (Bank of America (BAC) ), Charles Scharf (Bank of New York Mellon (BK) ), and Ronald O'Hanley (State Street (STT) ).

What gives? Plainly, House Democrats are skeptical. They want to hear from banking leadership that the industry is in a healthy, better capitalized place. Bankers will have to demonstrate improved diversity in the workplace as well creating better access for under-served communities. Even though clearly not quite the easy target that bankers were 10 years ago, I do not think anyone sees the group as popular. This will likely be an uneasy experience, where banking leadership will try to bob and weave as much as possible in order to escape the hearings with as little reputational damage as they can. There is one bank that will be present that will likely come under some fire for what happened in Malaysia last year. That would be Goldman Sachs.

Goldman Sachs is set to report the firm's first quarter financial results next Monday, Tax Day for Americans. Industry view is for EPS of $5.10 on revenue of $9.13 billion. The revenue print if realized will represent as -9% y/y. That would underperform expectations for both the broader market as well as the sector. Then there's Malaysia. This will eventually cost the firm something, perhaps treasure. Perhaps more. I am not expert in legal matters as to even go there.

I do not love Goldman Sachs. I never have. When recruited, once upon a time, I gave them the smart alecky answer that only an arrogant young professional, brimming with partially unearned confidence might. That said, they too at that point, had earned some resentment.

The one thing that my mercenary little heart (Mary Kate) does recognize is that these shares are potentially under-valued. The name trades below book value for a reason. Inverted yield curve. Uncertain trading environment. A government shutdown that will certainly show up as a negative in investment banking. Still... this is Goldman Sachs. If you needed to buy a thousand birthday cakes today, these were the guys who bought the bakery yesterday. If you changed your mind, and suddenly changed that order from birthday cakes to hammers, somehow they had already bought the hardware store too. Again, the shares are cheap for a number of reasons. Hard to ignore. Perhaps, at a discount, if it should come either in response to hearings on Capital Hill, or as a knee-jerk to other financial earnings on Friday, or finally on Monday, it is likely time to build a long position in this name, but only on my terms. Otherwise, I take a walk. 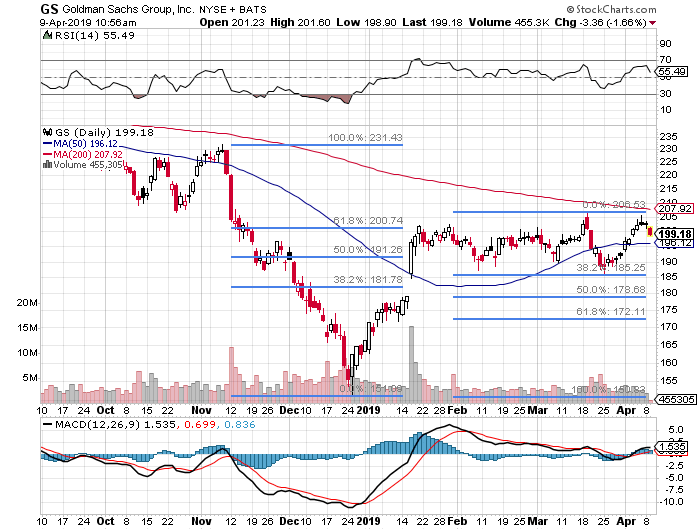 As you can see, GS plays well with Fibonacci levels. I don't think one can now expect a discount that significant at this time, unless the economy hints at recession. That's not happening right now. My thought is to enter into an entry level position (about 1/8 of intended size) at or close to the 50 day SMA ($196-ish). Might sell the $197.50 puts expiring April 18th, if I can get $3.50 for the darned things. If not, maybe we see if we can get $2.50 for the $195's. Interesting opportunity.

Get an email alert each time I write an article for Real Money. Click the "+Follow" next to my byline to this article.
TAGS: Earnings | Investing | Markets | Options | Stocks | Technical Analysis | Trading | Banking | Financial Services | Stock of the Day