Taking a look at segment performance, some of these lines are eye-popping...

- Investment Banking contributed revenue of $3.7 billion up 88% from a year ago, driven by higher fees for advisory services, underwriting and corporate lending. One note of caution... This is the second consecutive quarter with such robust performance for the investment bank, and the backlog is notably lower than it was three months ago at this time.

- Global Markets produced $5.61 billion in revenue generation, up 23% from a year ago. Fixed Income kicked in $2.51 billion, unchanged from a year ago, while equity pitched in $3.1 billion, up 51% year over year.

- Asset Management revenues decreased 18% to $2.28 billion, as equity and debt investment both took a hit in comparison to last year, while lending produced lower net revenue for this group as well.

Provisions for credit losses amounted to $175 million, down from $278 million for Q3 2020 for net benefit of $92 million. The firm's allowance for credit losses was $41.7 billion as of the last day of the third quarter. Operating expenses increased 6% to $6.59 billion. The firm returned $1.7 billion in capital to shareholders during the three month period reported. This included $1 billion worth of share repurchases and $700 million in dividend distribution. The balance sheet remains in good health. Cash is running a little lower than it was three months ago, but that is more than made up for in collateralized agreements and trading assets. Total liabilities are higher, but the lion's share of the growth is in deposits. 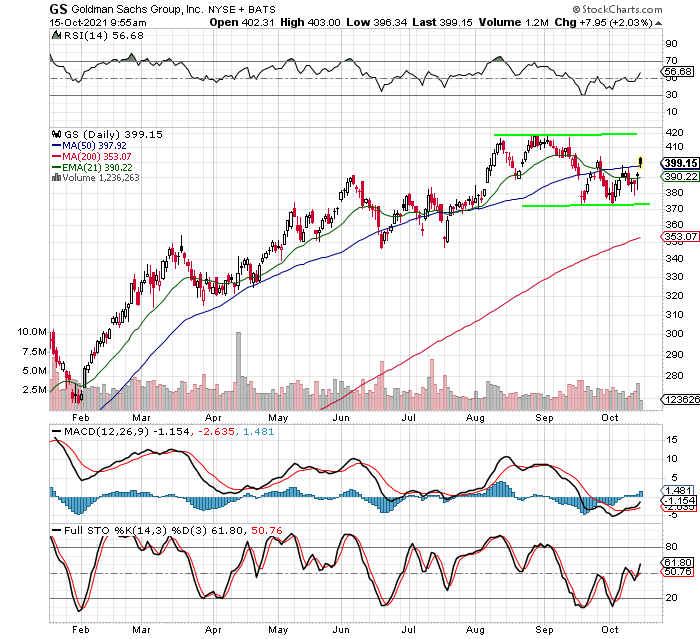 Readers will note that GS had a great quarter, one of their best ever, in fact their best ever in investment banking. Fact is that the backlog has run down a bit. The stock took back the 50 day SMA on Friday morning after taking back the 21 day EMA last night. The stock is nowhere near overbought and could conceivably run higher, with the resistance up around $420 which if approached would not even break the stock out of its current basing pattern. That's your pivot if you are in this for an investment.

As In wrote to you this week and told you on national television on Thursday, this was for me, a simple trader's trade. This trader bet on their traders. Not saying you're wrong for staying long. I am saying that my mission has been accomplished, and I will be exiting the name once this piece hits publication.