On Monday morning, Goldman Sachs (GS) released the firm's second quarter financial performance. Goldman saw a decrease in profitability. That was expected. On the whole, Goldman exceeded expectations quite comfortably. This is that story.

For the three month period ended June 30th, Goldman Sachs posted GAAP EPS of $7.73, which was down 48.5% from a year ago, but more than a full dollar better than consensus view. The firm did this on revenue of $11.86B. Again, revenue was down 23% from the comparable period last year, but totaled more than a cool $1B more than Wall Street had projected.

Annualized return on average common shareholder equity (ROE) was 10.6% for the quarter, and now stands at 12.8% for 2022 to date. Annualized return on average tangible common shareholder equity (ROTE) was 11.4% for the three months, and is now 13.6% over six months. Operating expenses were $7.65B, -11% from Q2 2021, primarily due to reduced outlays for compensation and benefits.

Consumer & Wealth Management contributed revenue of $2.176B, up 25%, driven by 67% growth in consumer banking.

Investment Banking contributed revenue of $2.137B, down 41%, driven by a 73% reduction in underwriting.

On July 14th, the Board of Directors increased the quarterly dividend to $2.50 per share, up from $2.00. This next dividend will be paid on September 29th to shareholders of record on September 1st.

I think Goldman Sachs defended itself very well in a time of strife. The firm did a great job of reducing expenses, but took that from labor. Can't go back to that well too often. Trading has been solid, but can not be counted on. Investment banking is the gravy of the business (especially for the most well-known "investment" bank in the world), there can be no timetable for a return to prominence for that business. It will rebound. Don't know when.

My preference, currently... Though I personally benefited greatly from the magic of investment banking in my career is to stick with the banks more reliant upon net interest income than on the fancy stuff for now. The day to shift will come.

For now, my names are Wells Fargo (WFC) and Bank of America (BAC) . Who is running those shops has a lot to do with my thinking. Moynihan has worked wonders at BAC, and is on the verge of probably becoming the highest profile CEO in banking. Scharf has a long way to go at Wells, but I do think he was the right choice to execute and complete the cultural and performance reclamation project that became Wells Fargo.

Goldman Sachs is fundamentally inexpensive, is executing well... and is certainly not a poor choice if that name is in your book. I just don't think I need three banks right now. There is a condition that might change my mind. 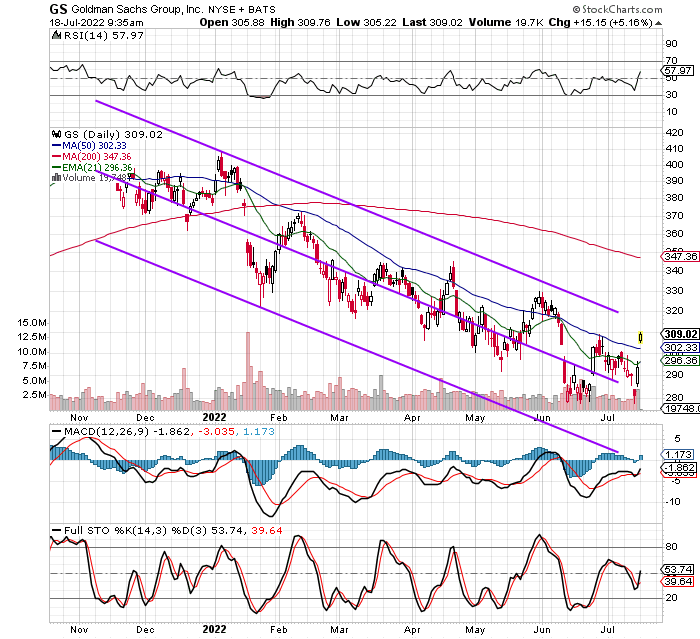 Goldman Sachs is putting together a second consecutive strong day on Monday. The shares have retaken both their 21 day EMA and 50 day SMA. Now, the 50 day line was taken on a gap-up opening. This is key. Should the shares hold that line Wall Street will be much more likely to pile on.

You get the PMs to crowd into this name, you may just get a breakout. Top of the upper trendline of our regression model currently runs through $320. I would rather buy this name on momentum, approaching that level, after surviving a test at the 50 day line, than just buy it on this morning's strength. That's just me.