What do I think? After General Motors (GM) reported third quarter financial performance on Thursday morning, and Ford Motor (F) reported last week? Revenues are not necessarily bad, but the price of purchasing a new vehicle? Let's just say that if someone were... say, going to purchase (or lease) a new car in order to avoid mass transit, you may end up paying for the product. There's demand, and probably not as much inventory as you think.

General Motors posted adjusted EPS of $2.83 (GAAP EPS of $2.78). Expectations were for something along the lines of $1.39. You read that right. Revenue generation landed at $35.5 billion. This number presents as a small beat, and almost flat from the same period last year. The stock was roaring. While this is a sales story to some degree, and a market share story as well, the headline or headlines from my point of view should be written through the prism of margin expansion, cash flow, and credit management. She may have gotten knocked around in the media after the Nikola (NKLA) circus, but one thing is now certain. Faced with a pandemic and charged with running a behemoth of an industrial corporation, CEO Mary Barra did her job especially well.

This is interesting. Net income increased to $4.05 billion, +74% from Q3 2019. North American operations earned a whopping $4.37 billion for the quarter, up 44% despite a nearly 10% decline in sales. How? EBIT adjusted margin of 14.9%. That's how, up from 8.4% a year ago. That's incredible. Sales did however improve each month, month over month for the quarter as regional economies tried to reopen. Chinese sales were actually 12% higher despite a contentious trade environment. This is where the growth is. Globally, sales were lower.

Where was the demand? Electric vehicles? Uhm, no. Crossovers, SUVs and large pick-up trucks are what drove margin as well as increased market share. On that note, the firm has reaffirmed its commitment to the future that will include both autonomous and electric vehicles that will include offerings under both the Hummer and Cadillac brand names. On the already mentioned relationship with Nikola, both sides have the right to terminate that deal should it not close by December 3rd.

Lastly, and importantly, General Motors repaid $5.2 billion of the firm's revolving credit facilities over the three month period reported, and then another $3.9 billion early in Q4 with a goal of repaying the whole enchilada by year's end, all the while being able to maintain a nice cash position. Along those lines, GM reported adjusted automotive operating cash flow of $9.1 billion. Seems like a lot because it is. That number was $5.4 billion for the comparable period in 2019. The firm ended the quarter with $37.8 billion worth of automotive liquidity. Obviously that would be after the $5.2 billion payment, but ahead of the $3.9 billion plunge.

This is a little tough, because I see the chart in two different ways. Hence, one tells a more bullish story than the other and pardon the pun, curbs my enthusiasm. Let me know what you think. What? Of course I trust you. 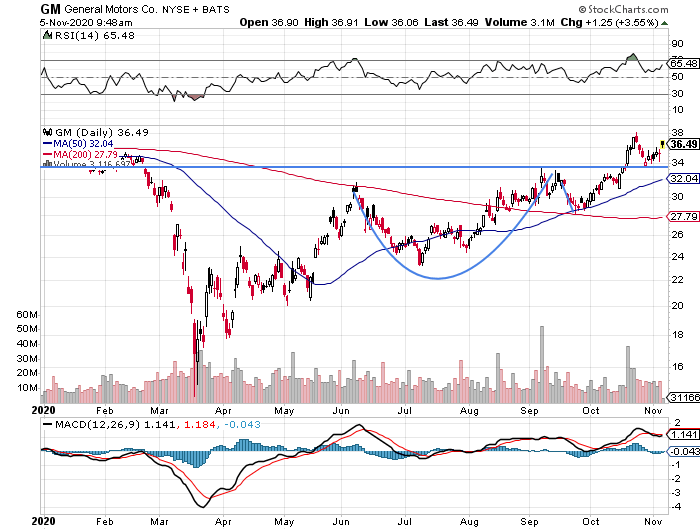 Upon first glance, I notice that the shares are close to being technically overbought, and that a cup and handle pattern established over the summer had created a pivot at the $33.50-ish level in early September. That spot would have created a price target of $40. There was a breakout in mid-October, and then the pivot was tested from above later in the month. Is another run at a potential $40 target worthy of creating equity risk in between $36 and $37? Maybe for a short term trader. 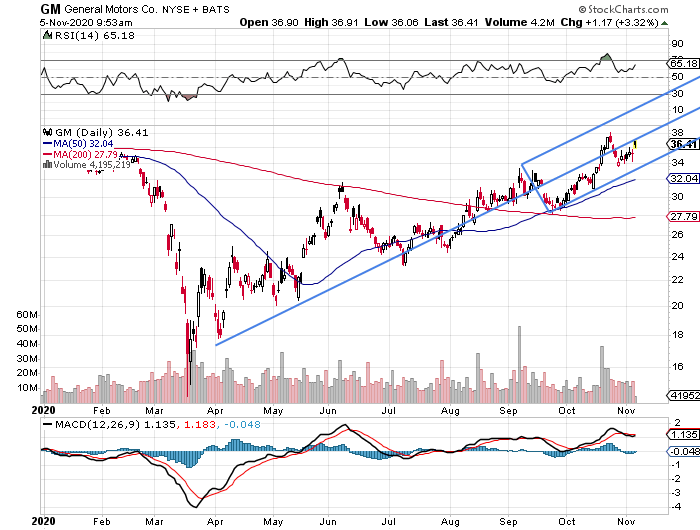 Then there's the Pitchfork that does not really work going back to the lows of March, but works quite well going back to the low of April. This suggests a continuance of trend which sounds much better to investors. This model also allows for a bull case target price closer to $45. Remember that the firm has not paid a dividend since February, so that's not a reason to hold, nor a way to reduce net basis.

I am not crazy about the equity. I did try to set up a couple of spreads. They don't work for me. Too much premium for the in line opportunity, Not enough on the sale just a few bucks higher on strike price. What I might do, and I am still just thinking about it, is do something like this.... maybe write the January $32 puts for $1.25. Pocket the $125 up front. If one does end up having the shares put to them, at least net basis will be down around $30.75. I think I could live with that.

Get an email alert each time I write an article for Real Money. Click the "+Follow" next to my byline to this article.
TAGS: Earnings | Investing | Markets | Stocks | Technical Analysis | Trading | Automotive | Transportation