Long neglect has worn away

Half the sweet enchanting smile;

Time has turned the bloom to grey;

Mold and damp the face defile.

But that lock of silky hair,

Still beneath the picture twined,

Tells what once those features were,

Paints their image on the mind.

Oh, but what a grand session it was. Everything had seemed to fall into place. The US dollar continued to weaken against a basket of its reserve currency peers. Treasury yields continued to fall. That could mean but one thing... That equities, debt securities and commodities in general, were on the rise. Huzzah !!

The US Dollar Index has respected the highs made in mid-October and now tests the lows made earlier in the month. Real Money/Real Money Pro colleague Carley Garner's Tuesday afternoon piece covers this, and is mandatory reading in my opinion. US Ten Year paper paid just 4.09% by day's end, while the Two Year Note paid 4.47%. Writing through the wee hours, I see the Ten Year giving up 4.05% and the Two Year giving back 4.43%.

While this is certainly reflective of a change in investor sentiment regarding the imminent trajectory of monetary policy and is certainly a major positive for our beloved equity market, there is but one gnarly, negative bi-product of this recent rise in prices for Treasury Notes. That would be the simple fact that T-Bill (as at least one more 75 basis point throat punch is expected from the FOMC) prices have not moved.

What this has done is to force the yields for the Three Month T-Bill and the Ten Year Note toward each other. What most economists know, and most folks should probably know, is that the San Francisco Fed has acknowledged an inversion of this particular spread (not the 10 yr/2 yr) as the most accurate predictor of economic recession at the Fed's disposal.

As readers can see, this spread briefly inverted last week and went out last night in a state of inversion. At zero-dark thirty on Wednesday morning, I see this spread still inverted at roughly -2 basis points.

That's not really news, is it? I mean most of us recognize the recession of early 2022 as we head into a positive reading on Thursday morning for Q3 2022 GDP, and even those who do not, generally seem to accept the inevitability of a more significant recession in 2023, both domestically and globally.

Tuesday was indeed glorious for those net long the marketplace. The Nasdaq Composite ran 2.25%, while the S&P 500 gained 1.63%. Both of those indexes were outperformed by the Russell 2000 and the S&P Mid-Cap 400. All 11 SPDR sector-select ETFs painted the markets green for the session, led by the REITs (XLRE) in a tip of the cap to the bond market. Energy (XLE) , finally took a break, but still posted a tiny gain.

Winners beat losers at the NYSE by close to an 11 to 2 margin and at the Nasdaq Market Site by roughly 4 to 1. Advancing volume captured an 85.2% share of composite NYSE-listed trade and an 87.7% share of that same metric for Nasdaq-listings. Aggregate trading volume increased for NYSE-listed names, and Nasdaq-listed names as well as across the S&P 500 and Nasdaq Composite. In short, on Tuesday, we appeared to get a confirmation of that confirmation that equity markets got on Friday. 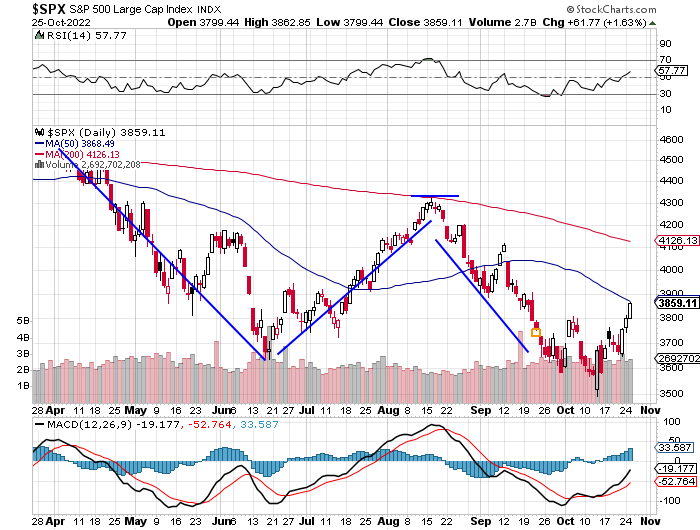 Just one thing. The S&P 500 knocked on the door of its 50 day SMA on Tuesday, but failed to open the door. That's okay. No sweat. Leave it for Wednesday. What could possibly go wrong?

"Life is just a fantasy, can you live this fantasy life?"

Someone popped a flare. I hit the wet ground. First-time training at night. Way before anyone ever heard of night-vision. Sweat poured down my face from my helmet, which was buckled way too tight. The waxy black and green face paint streaked into my mouth, down into my T-shirt. It was crazy hot. Carolina hot. This was really nothing. Don't tell that to this 17 year-old hard-charger. Explosions to the immediate left and right confused. Trip wires visible. How many were not visible? Good question.

They came in rapid fire succession. Microsoft (MSFT) beat Wall Street on a number of metrics, but disappointed on guidance, and gulp, on Azure where FX headwinds were even greater than had been feared. The stock is almost 6% lower as I write and has been lower than that. Alphabet (GOOGL) to put it bluntly, disappointed across the board, missing big where it counts perhaps most, in YouTube advertising. While free cash flow looks incredibly large and is relative to almost any other firm, the fact is that it missed the mark by a country mile. I see GOOGL down more than 6% this morning. Texas Instruments (TXN) beat on EPS, beat on revs, and guided lower. I see TXN off almost 5%.

The fact is that earnings season had been off to what had been a better than feared start, then high-tech caught an earnings beatdown overnight. What does this mean for Apple (AAPL) and Amazon (AMZN) on Thursday night? The comparisons are certainly not oranges to oranges, but Azure to AWS might be close. Is anyone on our side?

Anyone else notice the macro this week? It's been awful. On Monday, S&P Global put a disastrous Services Flash PMI and an also contractionary Manufacturing Flash PMI to the tape for October. On Tuesday, the FHFA HPI printed in the hole month over month, while the Case-Shiller HPI simply fell out of bed year over year, both for August.

In addition, the Richmond Fed Manufacturing Index, arguably the second most important regional manufacturing survey in the country, printed in deep contraction for October. BTW, the Richmond district has not experienced an expansionary monthly reading for its manufacturing base since April. Then, there's the consumer. The Conference Board released their Consumer Confidence survey for October and what we learned is that US consumers are even less confident than expected. Did I mention that credit card balances are soaring while credit card interest rates rise along in correlation? Hmm.

What this does is box the FOMC in. Sure, we'll see New Home Sales this morning and Durable Goods Orders on Thursday morning. Those are important. There will be a Q3 GDP print on Thursday morning that will make some folks happy. Then, on Friday, the lofty September CPI data will be reinforced by also lofty September PCE numbers. The Fed has pushed the economy to the brink. We warned them months, many months ago. Suddenly, if that piece at the WSJ on Friday is to be trusted, the "Keystone Cops" that currently comprise that committee have come to the start of this grotesque realization.

Just an FYI... while futures markets are still pricing in a 93% probability for a 75 basis point rate hike on November 2nd, there is now a 51% probability for "just" a 25 or 50 bps increase to be made on December 14th.

Equity markets will be tested this morning, especially where tech is concerned. I told you that a tradeable bottom had been confirmed on Friday for equities. Carley Garner told you that a top had been confirmed for the US Dollar Index. If this market can survive last night's earnings without completely breaking anything, I think we still have a ballgame, gang. Thank goodness the Fed is in "blackout" this week.

(XLE, MSFT, GOOGL, AAPL, AMZN, F, and URI are holdings in the Action Alerts PLUS member club. Want to be alerted before AAP buys or sells these stocks? Learn more now.)

Get an email alert each time I write an article for Real Money. Click the "+Follow" next to my byline to this article.
TAGS: Earnings | Economic Data | Economy | Federal Reserve | Investing | Markets | Stocks | Technical Analysis | Trading | Technology