On Monday morning, according to a filing, Qualcomm (QCOM) agreed to purchase $4.2B in additional semiconductor chips from GlobalFoundries (GFS) that would bring the total commitment between the two entities up to $7.4B worth of purchases through the year 2028.

The work will be done at the GlobalFoundries New York facility. The deal covers chips manufactured for use in 5G transceivers, Wi-Fi, automotive, and Internet of Things (IoT) usage. The stock ran 11.49% on the news.

That news came on the heels of the US Senate having passed legislation last month that would provide roughly $52B in government subsidies for the domestic production of semiconductor chips and investment tax credits of up to $24B for the building out of chip plants in the US.

In a statement released after the announcement of the Qualcomm extension, GlobalFoundries CEO Thomas Caulfield acknowledged that having Qualcomm as a long-term customer - since the beginning in 2021 - along with both state and federal funding would help expand the company's domestic manufacturing footprint.

On Tuesday, GlobalFoundries released the firm's second quarter financial results. For the period ended June 30th, GlobalFoundries posted adjusted EPS of $0.58 (GAAP EPS: $0.48) on record revenue of $1.99B. Both top and bottom line performance beat Wall Street, while the revenue print was good enough for year over year growth of 23%.

Revenue generation was not the only place where GFS produced a record for the quarter. Gross margin landed at a record 27% (adjusted gross margin: 28%), while operating margin hit a record 14.9% (adjusted operating margin: 17.6%). Net income of $264M was, say it with me... a new record (adjusted net income: $317M), while adjusted EBITDA margin also hit a new record of 39.3%. Cash from operations increased 40% to $609M. Safe to say that GlobalFoundries had a darned good quarter.

As of June 30th, GlobalFoundries had a net cash position of $2.999B and inventories of $1.262B. This made for current assets of $5.508B. Current liabilities amounted to $3.313B including $262M in long-term debt labeled as current. This leaves GFS with a current ratio of 1.66 and a quick ratio of 1.28. Both of these ratios are more than acceptable.

Total assets add up to $16.194B with no entry made for intangible assets (rock on). Total liabilities less equity comes to $7.536B, including $1.908B in long-term debt in addition to the above mentioned $262M. The firm could pay off its entire debt-load out of its cash position if it so desired. This is a rock-solid balance sheet.

What's not to like? Warnings of one kind or another from Nvidia (NVDA) and Micron (MU) have damaged semiconductor stocks (that had been on a run) this week, yet, GFS produces good news in the form of a beefed up deal with a return customer and a red hot earnings report.

Then there's the balance sheet. You know I love a strong balance sheet. The stock is highly valued, at 26 times forward looking earnings. Perhaps that's expensive. Perhaps, it's been earned. The global leader in fabrication, Taiwan Semiconductor (TSM) trades at 14 times, but there's a lot of geopolitical risk involved there. 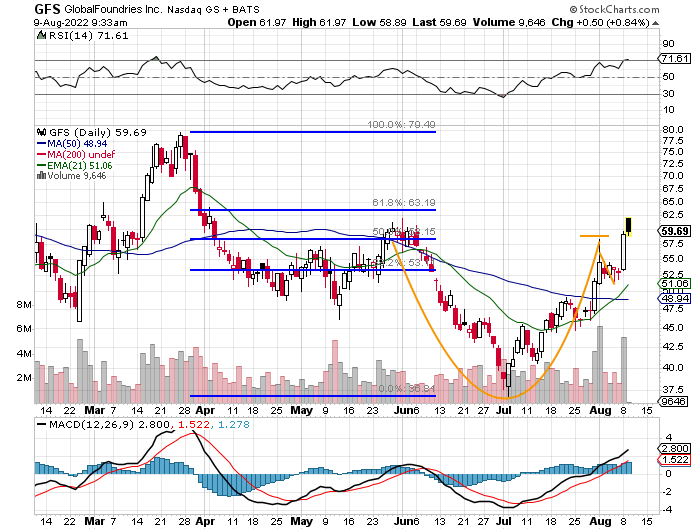 This is a very interesting chart. GFS peaked at $79.49 back in March. The stock sold off in two legs, bottoming at $36.81 in early July. The stock then rallied in just a few weeks to where it finally hit some resistance at a 50% retracement of the entire selloff.

At that point, GFS hiccupped, and produced a handle for the now completed cup pattern. This created a $58 pivot. The stock is currently in the process of trying to break out past that pivot now.

Should GFS successfully break out from here, I think we are talking about prices in the $69 to $70 range. Where's the support? The 50 day SMA is running at $49, which would require failure in this breakout.

I think GFS is a good stock that could belong in one of my portfolios. Getting the right price, however, is the difficult part. In a week, the firm specific good news for GFS will have to run dry. It has to. Current weakness in the semiconductor space is likely at this point to rear its ugly head some more. I think for now, I can take a pass on paying above pivot prices. Remember, $70 is the target. Support is probably around $49.

(Nvidia is a holding in the Action Alerts PLUS member club. Want to be alerted before AAP buys or sells NVDA? Learn more now.)

Get an email alert each time I write an article for Real Money. Click the "+Follow" next to my byline to this article.
TAGS: Earnings | Investing | Stocks | Technical Analysis | Trading | Semiconductors & Semiconductor Equipment