It would appear to the outside observer that so much has changed in such a short period of time. In all accuracy, perhaps the most significant change of all has simply been in perception itself, and this has led to the rapid repricing of risk, as well as a willingness to take on a higher level of said risk at what were clearly oversold levels.

Last week, U.S. financial markets began this move, ahead of the G-20 summit in Argentina, simply on Fed Chair Jerome Powell's vague recognition that the Fed Funds rate might be approaching the mythical "neutral rate" where policy would be considered neither accommodative nor restrictive. The reality is that the Fed Funds rate remains in a target range of 2% to 2.25% with a one quarter point hike in two weeks all but written in stone. The "quantitative tightening" program that removes $50 billion worth of potential liquidity from the economy should the need arise, remains, and likely will remain untouched, also remains incredibly unmentioned. The probability of a second increase for the targeted Fed Funds Rate for calendar 2019 has been taken down a peg in futures markets that trade that product from a rough 45% to an approximate 35% in less than two weeks' time. For me, the real threat to equity valuations going forward stems from the already mentioned QT roll-off. That understood, the mere fact that membership at the FOMC seems to have listened, and are even considering acting, or not acting upon the overt degradation across the realm of macro-economic data-points as well as the advice of actual practitioners is truly encouraging, and shows a real-life willingness to evolve in real time that had long been missing at the central bank.

Those in search of more guidance on monetary policy can look forward to five Fed heads scheduled to pollute the atmosphere with their thoughts throughout today's trading session. As far as fiscal policy... yeah, that's still unsustainable. No change there. However, global financial markets are in serious risk-on mode as late Sunday night melts into early Monday morning.

A Party? You Shouldn't Have.

It would appear that a worst case scenario had been averted in Argentina over the weekend. President Donald Trump has agreed to leave the current schedule of tariffs governing trade with China in place for 90 days. In response, President Xi has agreed to immediately increase agricultural imports from the U.S. Basically, both men agreed not to escalate the trade war for three months, but leave the current lines already in the sand in place. While this forces the public to price some optimism back into financial markets, these measures will also recreate increased headline risk, if that's even possible.

Traders can look for a significant pop in their favorite equity names this morning. I expect that traders who are likely still sporting account balances with significantly lower headline numbers that they bore just two months ago, might just be wearing larger long positions at least in their core names than they were two weeks ago. Just speaking for myself, I will likely look to exit at least the portion of those shares (cloud names? (AMZN) ? (MSFT) ? (CRM) ? (ADBE) ?) that were added nearer to market lows, while leaving core positions in place.

My forward looking expectations are that while these developments are potential positives, that the Chinese economy is still slowing, Italy and Brexit remains boondoggles, and that while a trade peace with China will allow for certain sectors to slow the decay of earnings growth from peak levels, that there will still be some decay.

Bottom line? I think that carrying a heavy pack over uneven terrain becomes dangerous, especially while trying to remain offensive. Intense rallies like what you will see this morning allow traders to streamline their focus. A smaller, more refined portfolio is in my opinion, never a bad thing, as long as that portfolio remains diversified. Hard assets will always have a spot among my holdings.

Really, You Shouldn't Have

Over the weekend, it seems that Russia and Saudi Arabia have decided to, without saying anything specific, work together in stabilizing oil markets ahead of the OPEC and friends meetings later this week in Vienna.

Hmm, you don't say. After a November to forget for energy traders, where crude prices slipped an approximate 22%, it would appear that major producers will try to make a stand with WTI having tested the $50 mark last week. If traders believe that there will be an extension in OPEC production cuts, then crude and the sector as a whole will remain in play all week, and while trading significantly higher this morning remains grotesquely oversold. In my opinion, this is where opportunity remains to purchase yield at a discount prior to moving toward our next negative headline, which is out there somewhere.... unless you believe in miracles. Oh, and Qatar says they quit the gang.

Yes, we've all seen encouraging numbers related to the start of the holiday season. Many of these fine data-points are related to e-commerce, and heck, why not? Santa is coming and wow... this year more than ever he has WiFi. When it come to trends in retailing, I watch the weekly year over year Redbook data for chain store sales rather closely. The important thing to note here is just how robust the growth has been for this series.

Last week, the series sported yearly growth of 7.9%. Okay, that number was obviously skewed by the early kick-off to the holiday season. Let that go. This series has not printed at year over year growth of less than 4% since the summer. It was only 18 months ago that anything over 2% was considered stellar, and it was as recently as 2016 that any growth at all was considered a positive.

What this tells me is that the beat-down sustained by the retailers over the past two months is unjustified, and after this morning's pop (don't just blindly pay the high), this is a group where core longs could offer respectable return. Personally, I will be looking to add to my Kohl's (KSS) , and Target (TGT) longs should they soften later in the day, or tomorrow.

RH (RH) , formerly known as Restoration Hardware, will report the firm's quarterly (Q3) results after this evening's closing bell, instead of after tomorrow's close as domestic financial markets will close on Wednesday in respect to the passing of former President George H.W. Bush. Projections are for EPS of $1.27 on revenue just above $637 million. Whispers are running considerably above both of those "consensus" expectations. 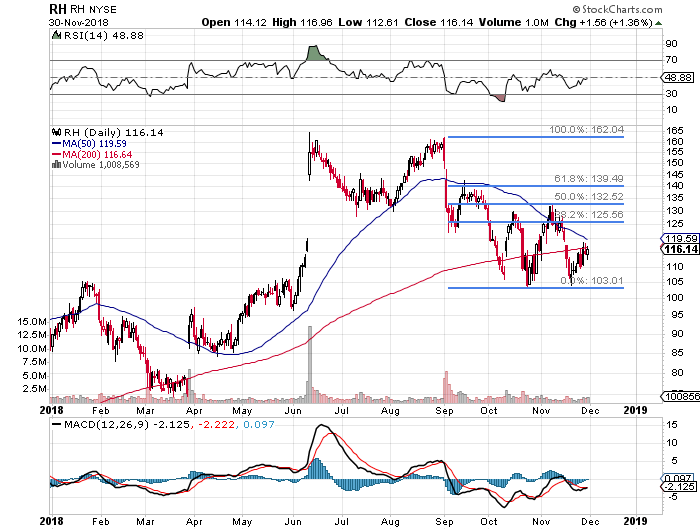 What a wild ride. This name, at least as of Friday afternoon's closing bell, remains about 30% off it's 2018 highs, and roughly 54% above the stock's 2018 lows. In addition, this stock is up about 35% year to date, has survived an apparent triple bottom in the $103 neighborhood, hit resistance at a precises 50% retracement off of that support from the yearly highs, all while inching toward the possibility of a technical death cross. Gee whiz.

Keep in mind that this name is highly exposed to China. While I see this stock as mildly undervalued, I can not in any certain terms guess how the share price will respond to tonight's numbers much less a 90 day truce in the trade war. About all I feel comfortable with is that this stock will not flat-line. In other words, it is probably a safe bet that the stock will not be trading at $116 in three months, or even one week. That's why as Friday drained into it's final seconds a straddle around that price expiring this coming Friday would still cost the trader a rough $20. Too much in my opinion to move risk reward in this trader's favor, yet not enough to make the sale.

My thought is that the safer money will be made through the purchase of either a bull call or bear put spread. My instinct is that the move goes higher. No promises. If I can get long a bull call spread with strike prices that span ten bucks to the upside from the last sale expiring this Friday, for a net debit of less than five dollars (preferably closer to four), I think I go that route. If I can not, then I take a hike. Rock on.