There may be no borders when it comes to e-commerce but there are boundaries. Challenges still exist when transacting business in another country whether we're talking about the consumer or the business. That's where Global-E Online (GLBE) fills a need. The company offers a software-as-a-service (SaaS) platform, enabling retail merchants to leverage an already successful domestic website and launch internationally, while Global-e manages the localization, payments, including taxes and currency, and physical delivery.

In short, they act like a translator and middleman. It reminds me of Red from the movie Shawshank Redemption. When a customer visits a site, they see it in their local language even if the business is located halfway around the globe. If that customer orders, Global-E handles the delivery logistics and returns on behalf of the company, including making sure pricing is easily understood by both parties.

The company has over 400 brands using its platform, but the thing that has investors and analysts most excited is its partnership with behemoth Shopify (SHOP) . This partnership has yet to contribute any meaningful revenue, but it should act as a strong catalyst over the next few years. Let's not miss the fact that Shopify owns roughly 5% of GLBE, with enough warrants to more than double its ownership stake. Even without the help of Shopify yet, GLBE recently posted third quarter revenue of $59.1 million, a 77% year-over-year growth rate. Gross margins skyrocketed from 30.2% to 38.6%. Gross merchandise value (GMV) grew by 86% to $352 million.

An underappreciated aspect of the quarterly results was the expansion of existing partners. In my view, this is similar this to net revenue retention (NRR). Luxury brand LVMH (LVMHF) , consumer electronics brand Sennheiser, Spanish footwear brand Camper, and luxury jewelry brand Boucheron all expanded the scope of their current partnerships. GLBE also established a footprint in Australia through a partnership with the Australia Post. Speaking of net revenue retention rates, Global-E enjoys a NRR in the 140% range, among the highest I've seen in the business.

The company did complete the first phase rollout of the new native integration with large Shopify-based merchants. The initial pilot merchants are live and now selling through the plug in. Management has increased full-year revenue guidance from a range of $227-$231 million to $239-$241 million. Additionally, GMV of $1.41-$1.42 billion is now being projected versus the previously anticipated amount of $1.35-$1.37 billion. 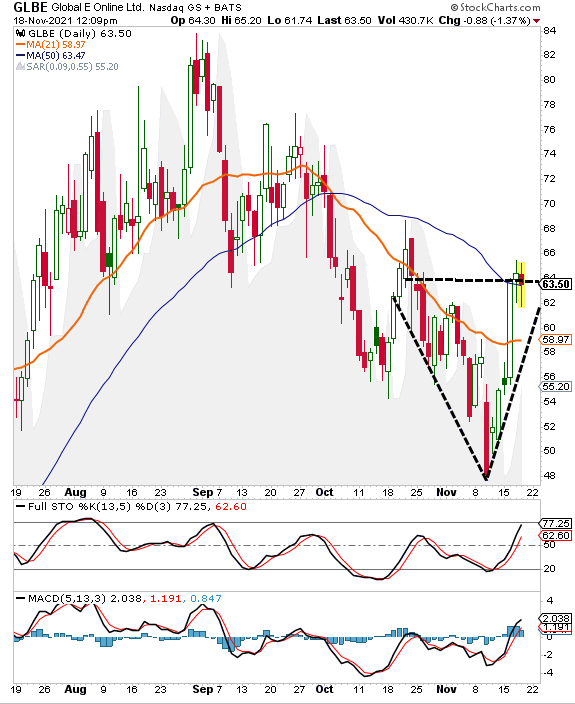 The stock has blasted off over the past week, so it is a tough chase right now as it comes into resistance in the $64 to $68 range. Should we run over $67, I believe we'll see a push into the $75 to $77 range. A big positive here is the stock is sitting on the 50-day simple moving average (SMA). We still have several hours left today, so the stock needs to hold this level. A close under the 50-day may mean we're in for several days of consolidation which may actually be a positive for a longer-term view. Secondary indicators are still pushing higher yet not into overbought territory. Again, another positive but something we need to watch.

Of course, GLBE holds an aggressive valuation based on the right here, right now. While some see a risk that big names will move logistics in house, JD.com (JD) managed to rise to the top in China by focusing on logistics in the e-commerce space because others didn't want to. I see GLBE following in the same footsteps. Short-term I expect volatility, but longer-term, I view GLBE as a high-risk, high-reward name with the reward outweighing the risk.

Get an email alert each time I write an article for Real Money. Click the "+Follow" next to my byline to this article.
TAGS: Investing | Stocks | Technical Analysis | Trading | E-Commerce