Jim Cramer told his Mad Money viewers about his impressions of GlaxoSmithKline (GSK) ahead of this week's company investor meeting. He said the meeting is turning out to be a high-stakes event for shareholders, as the company will unveil its widely criticized plans for its breakup and dividend.

Back in 2018, Glaxo acquired Tesaro for $5.1 billion and announced plans to spin off and merge its consumer health business with Pfizer's (PFE) , leaving its pharma and vaccine business behind.

Since then, progress has been painfully slow going, with shares falling 4.4% over the past three years. The under-performance caught the eye of activist investor Elliott Management, which now has a significant stake in the company.

Adding to the importance of this week's meeting are rumors that Glaxo plans to slash its dividend to help with the split and spur additional growth. Cramer said this would be a death blow for the stock.

What will we learn Wednesday? Cramer said, hopefully, we'll hear their forecast for the remaining Glaxo, along with an update on the company's drug pipeline. We also need to hear, good or bad, whether the dividend is in jeopardy.

If shares plunge, it could be a buying opportunity, but only after we hear the company's plans.

Let's check out the stock's charts.

In this daily bar chart of GSK, we can see a small double bottom around $34 with lows in late October and early March. Prices have traded higher to break above the January highs. GSK is above the rising 50-day moving average line and above the bottoming 200-day line.

The On-Balance-Volume (OBV) line shows a rise from early March telling us that buyers of GSK are being more aggressive. The Moving Average Convergence Divergence (MACD) is above the zero line but pointed down towards the zero line.

In this weekly Japanese candlestick chart of GSK, below, we can see a mixed picture at best. The recent upper shadow tells us that traders have rejected the highs. Prices are trading above the bottoming 40-week moving average line.

The weekly OBV line has been stalled the past three months. The MACD oscillator is above the zero line but narrowing towards a downside crossover.

In this daily Point and Figure chart of GSK, below, we can see a potential upside price target in the $57 area but prices are currently in a down column. 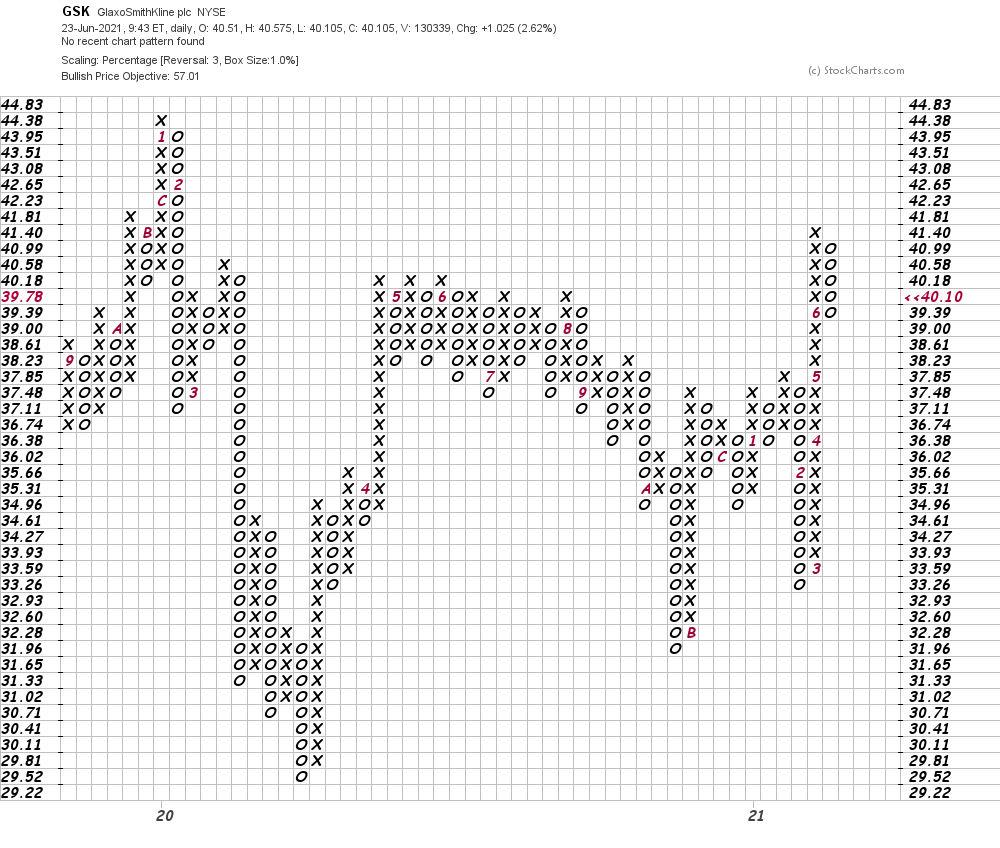 Bottom line strategy: The charts and indicators of GSK are not compelling right now. I think a wait and see position is needed for now.

Get an email alert each time I write an article for Real Money. Click the "+Follow" next to my byline to this article.
TAGS: Investing | Stocks | Technical Analysis | Trading | Pharmaceuticals | Mad Money