Re-Focusing. 4 pm. Tuesday, February 4th. The closing bell had literally just finished with its business for the day. Gilead (GILD) reported the firm's fourth quarter numbers. The adjusted EPS print was a mess, missing consensus expectations by 37 cents. Revenue generation did show a small year over year increase, and actually managed to beat the street. The firm did increase the dividend. The stock sold off fairly hard in response. The reaction from the analyst community was less than enthusiastic. There were cuts made to both rating and target prices on the days that followed. None of that matters very much right now.

Gilead has been in almost a perpetual search for a performance driver ever since sales for the firm's Hepatitis C treatment plummeted in 2016. In fact, the firm has now posted adjusted EPS in decline for 15 of the last 16 quarters. The firm has worked on treatments for cancer, Ebola, arthritis, and HIV in recent years. It was that Ebola treatment (Remdesivir), still experimental, that Gilead sent to China for clinical testing as an anti-viral candidate for treating what we now know as Covid-19. As long as the planet is frightened. As long as the world continues to become a less certain place as far as the future of this virus is concerned, and until definable results are in for this potential treatment, Gilead has become, and will be a volatile name.

There is a problem though. As first reported nearly a week ago in the Wall Street Journal, and reiterated going into the weekend at the South China Morning Post, these clinical tests that are being run in 10 Wuhan area hospitals are finding it difficult in finding enough recruits that fit the intended requirements going in to the tests.

Still drawing from the piece at the Morning Post, Gilead Chief Medical Officer Merdad Parsey informed Chinese state-run news agency Xinhua that the company did not expect to see results until April. However, Tedros Adhanom Ghebreyesus, director general at the WHO (World Health Organization) told the press last week that there could be preliminary results available for this treatment as well as others within three weeks.

On Friday, Chinese Vice Minister Xu Nanping told the media that in-vitro testing of Remdesvir have so far shown a "very good inhibiting effect" and that he awaits the clarity of the pending clinical results.

Should traders enter right here? I'm not always right, but I am not. 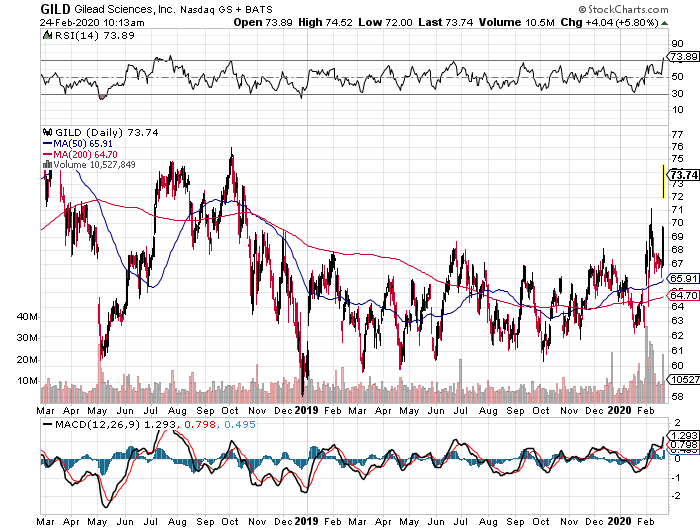 The shares now trade at a 15 month high. These clinical tests pan out well and there will be a pop in this stock, forget that the shares look overbought. That means nothing right now. Would I reconsider later this week, if we should see a reversal in the market's overall risk-off behavior? Perhaps close to the 50 day SMA.

I would consider any entry a trade, and not an investment if I indeed did go that route. In the meantime, a $75/$80 April 17th bull call spread could be worth the risk of a roughly $2 net debit, but I would not risk more than $2 to win back $5. With tech trading the way it is this morning, there are bigger fish to fry, and I am fishing. For trades.

Remember, this is no time to feel married to any stock. No need to love anything that can't love you back.

Get an email alert each time I write an article for Real Money. Click the "+Follow" next to my byline to this article.
TAGS: Drug Approvals | Investing | Markets | Stocks | Technical Analysis | Trading | Pharmaceuticals | China | Stock of the Day