Today (Wednesday) brings the Best Buy (BBY) Investor Update that many have been looking forward to. We'll get to that in a moment. I am still looking back... back at the 64 page report published by analysts at Morgan Stanley earlier this week. Morgan Stanley rates the name at "Overweight" with a $100 price target. That's interesting. What's more interesting is the feeling these analysts have that perhaps the new-ish direction that Best Buy has taken toward the health care space could provide more value in the long run, than is probably being priced into the stock at this time.

Morgan places potential revenue generation for Best Buy from commercial health care over the next 10 to 20 years at between $11 billion to $46 billion. I know. Seems fanciful. Could drive a truck through those ranges. All true, but the fact is that the move away from traditional brick and mortar retail as a core does make sense, and other firms such as Apple (AAPL) , and Walmart (WMT) have already taken steps to get there as well. Smart people have identified healthcare and wellness as a consumer concern, and those adept at reaching the consumer have entered this arena.

As Andria Cheng at Barron's pointed out on Tuesday, Best Buy has spent roughly $1 billion over the past year, making three healthcare-based acquisitions that largely focus on healthcare for the seniors market and bring with them hundreds of thousands of paying subscribers as well as improved data based analytics to aid in predictability.

First off, one must understand that Best Buy is under new management. The new CEO, since June, is former CFO Corie Barrie, the first female lead at the firm, and the youngest female CEO at any constituent firm in the Fortune 100. Barry comes off as both ready and energetic. Now, as part of the firm's "new Blue" strategy, goals are being set as far out as the year 2025. Best Buy now shoots for $50 billion in revenue by fiscal 2025. For comparison, consensus analyst view for fiscal 2020 is for $43.4 billion, and for FY 2021 is at $44 billion. The firm has also targeted a $1 billion reduction in expenses by 2025.

On that note, readers may recall that for the recently (Aug 29th) reported fiscal Q2 that ended in July, the firm posted revenue growth of just 1.7% (+2.1% domestic), while missing expectations, but adjusted earnings for the period expanded 19% to $1.08. This was done through careful expectation while taking steps to mitigate impact from the trade war. Operating margin actually improved. For a retailer primarily selling electronic gear in a slower environment for smart phones. Not bad.

Looking ahead, Barrie acknowledges that the trade environment got a little bit tougher as 15% taxes went into effect on some Chinese imports (think televisions, headphones, other gear) on September 1st, and more will hit on December 15th if no trade peace is reached by that date. According to Courtney Reagan's piece on CNBC's website, 60% of this firm's goods sold are subject to tariffs placed on China, but Barry has prepared the firm through a number of mitigation strategies to include supply chain adjustments made by Best Buy as well as Best Buy's vendors that could cut this percentage down to 40%.

There are definitely worse places to invest than in the equity of Best Buy. I like the firm in general. I like the new CEO. I like the turn toward healthcare as an intelligent refocusing of direction. Still, the stock, like it or not, will trade with the ups and downs of not just trade war headlines, but also in response to a highly competitive e-tailing environment. The firm does have one competitive advantage. As a big box retailer, there is no connection to the mall. You find a Best Buy, you have probably also found one of a number of other retailers such as Target (TGT) , Walmart (WMT) or Home Depot (HD) , all not so direct competitors that have found ways to best adapt to the changed landscape of modern retail. 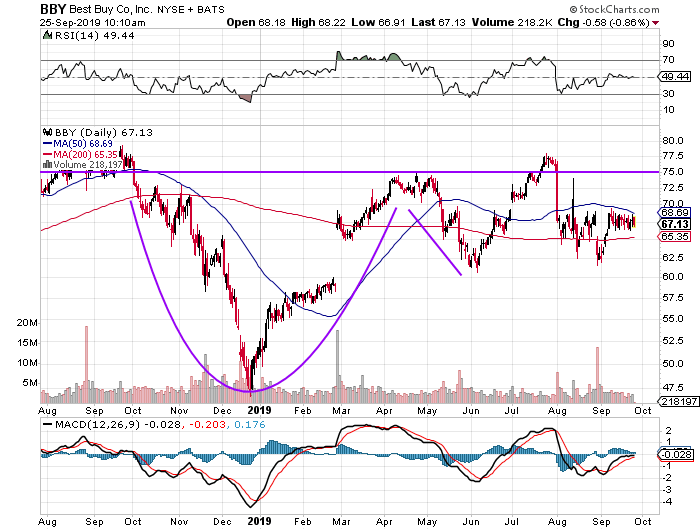 Year to date, the stock of Best Buy is up huge thanks to the December selloff. A more realistic take would be that in the wake of a huge cup with handle pattern that the attempted breakout in July simply failed. The shares have consolidated over the summer trading in a very tight range (especially through the month of September) penned by the stock's 50 day SMA (currently $68.69) at the top, and the stock's 200 day SMA (currently $65.35) at the bottom.

This chart does not provoke any action on my part at this time. That said, I would be interested in riding a momentum trade created by our friendly neighborhood algorithmic traders on a short-term trade given an upside crack of that blue line. For investors, the shares do yield 2.95%, which may be attractive. A gambler could purchase a $67.00/$66.50 September 27th strangle for roughly $2.30 on the hopes that one of those lines gives before the end of the week. That gambler would need to the shares trade at $69.30 or greater... or $64.20 or less in order to break even.

(Apple and Home Depot are holdings in Jim Cramer's Action Alerts PLUS member club. Want to be alerted before Jim Cramer buys or sells AAPL or HD? Learn more now.)

Get an email alert each time I write an article for Real Money. Click the "+Follow" next to my byline to this article.
TAGS: Investing | Stocks | Technical Analysis | Trading | Consumer Services | Healthcare | Retail | Stock of the Day