I almost ran with United Parcel Service (UPS) this morning. That stock was up 8% in pre-opening trade, I am long. Victory laps are always tempting. However, I am also long General Electric (GE) , as I guess so are a whole lot of you. That name was down more than 2% in pre-opening trade, and maybe we can put our heads together and figure out a thing or two about how to take it from here. So, suck up that last drop of coffee you filthy maggot, and let's get to work.

And a very unhappy tear."

For the firm's first quarter, GE reported adjusted EPS of $0.03, beating Wall Street's expectations by more than a penny (but less than two cents). Real (GAAP) earnings amounted to a flat ($0.00) print which was really very impressive. Most folks were looking for a significant GAAP loss. Revenue generation disappointed however at $17.12 billion. That number not only missed, but was only good enough for a year over year contraction of 12.2%. On that, total orders contracted by some 13%, but due to divestitures, organic orders "only" contracted 8%.

Now, understanding all of the information thrown at us in the material is confusing, but that is due to the nature of what this CEO Larry Culp inherited. If you have ever perused earnings related material provided by GE, then you know that historically it was virtually impossible to decipher just what the heck was going on. Flaherty tried to straighten that out and Culp is actually getting it done.

GAAP Industrial Cash from Operations amounted to $-491 million, an improvement from $1.662 billion one year ago. Non-GAAP Industrial Free Cash Flow printed at $-845 million, improving from $2.207 billion.

Note: The sale of the GECAS jet leasing business to AerCap Holdings (AER) of Ireland, announced in early March for a cool $30 billion is expected to close early next year. The proceeds are expected to be used to pay down debt.

Guidance and My Thoughts

The firm reaffirms full year guidance. Adjusted EPS is still expected to end up in a range of $0.15 to $0.25. Industrial Free Cash Flow is still expected to end up in between $2.5 billion and $4.5 billion. Industrial revenues are expected to grow organically in the low single digits (percentage wise). Adjusted profit margin is still expected to expand by at least 250 basis points. My thoughts? This all depends on demand for air travel and what that would do subsequently for the Aviation segment. This is the largest business unit and in normal times, the most profitable. For the turnaround at this company to continue at the pace it has, and to meet this year's targets, aviation has to approach something close to normal in order to subsidize weaker businesses that might be further behind in their reorganization.

But a glide and a whistle and a snowy white back" 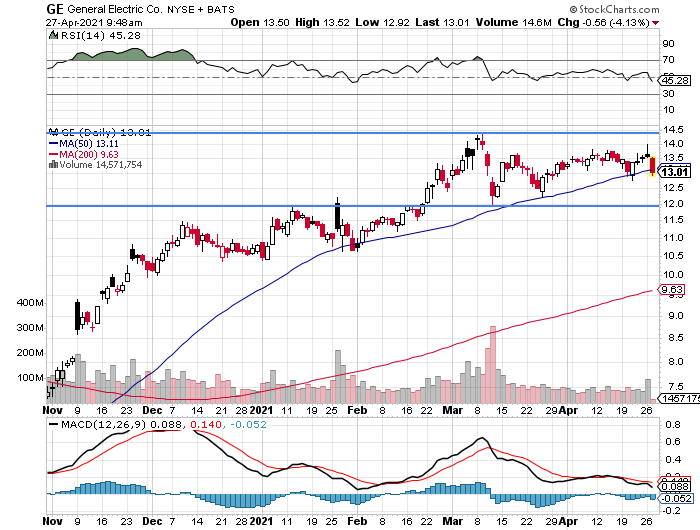 Readers will note that after a very nice run into March, that began way back in September, that shares of GE have gone into a basing period of consolidation. What I do not like about this morning's action is the dip below the 50 day SMA at $13.11. If this level is not retaken this week, that puts the lower bound of the base (let's call it $12) in play. That said, I am a buyer at and close to that 50 day line. I will add if the shares are still here, or lower upon publication. ( I can not front run my own article.) Yes, this is well above my net basis, but I have been adding on dips the whole time. My net basis is just below $9, which is probably a couple of bucks above where you thought it was if you read me often.

Note: Italicized excerpts are from the Danny Kaye version of "The Ugly Duckling" (1952), written by Frank Loesser, and adapted from the Hans Christian Andersen fairy tale.

(UPS is a holding in Jim Cramer's Action Alerts PLUS member club. Want to be alerted before Jim Cramer buys or sells this stock? Learn more now.)

Get an email alert each time I write an article for Real Money. Click the "+Follow" next to my byline to this article.
TAGS: Earnings | Economy | Investing | Stocks | Technical Analysis | Trading | Technology | Industrials