As if an FOMC policy decision on Wednesday afternoon were not enough, the next three days, today being Monday, January 25th, are just loaded with high-profile quarterly earnings releases. You will get hit both prior to, and just after that glorious bell rings aloud at 11 Wall Street. So what stands out on Tuesday? Let's do this one at a time. What stands out on Tuesday morning? A number of Sarge longs are reporting. Johnson & Johnson (JNJ) , Raytheon Technologies (RTX) , and Verizon (VZ) all stand out. So, do some other interesting names that I have no financial interest in at the time, such as 3M Company (MMM) , American Express (AXP) , and Lockheed Martin (LMT) . As an investor, however, I would like to focus on one name I think has a future, though certainly not yet out of the woods. I am talking about General Electric (GE) .

You'll recall that back in October, GE reported a surprise profit on revenue that even at -16.9% year over year, posted an upside surprise. Even more importantly, industrial free cash flow, which is what one must talk about when talking about GE, landed at $514 million, up from $-2.1 billion the quarter prior. This Tuesday the street is looking for a profit. An EPS of $0.09 is the consensus of the 17 or so sell-side analysts that cover this name. Revenue is expected to land at a rough $21.7 billion. If these numbers end up being accurate, this would be earning growth of -21% on revenue growth of -17.2%. Don't forget that Q4 2019 was way back in the "before" times, as in before the world ended last spring. Like almost all firms that do almost anything industrial, GE has been hampered by the pandemic. Let's not forget that GE aviation will do much better once there is a resumption in either business or consumer travel.

GE remains a cash flow based story. The street sees firm wide inflows approaching numbers greater than $2.5 billion for full year 2021, and that number nearly doubling the year after. To get there from here of course, GE Aviation has to be able to get in gear, so the vaccine rollout is an important story for GE investors. In the meantime, GE Power, and GE Renewable Energy will have to carry the football. Until GE gets there from here, there are two other factors that matter. One is CEO Larry Culp's ability to keep cutting costs, and finding non-core value that can be repackaged and sold. The other is oil. Yes, oil prices are higher. Remember GE still holds a rough 30% stake in Baker Hughes  (BKR) , after disclosing that the firm had sold more than 38 million shares (leaving more than 311 million shares) on January 22nd. BKR is up about 75% with crude prices since the lows of early October.

I can think of two. One, the economy's recovery from the pandemic hits more bumps in the road as the virus mutates and the vaccines' efficacy comes into question. This reduces demand for travel and subsequently for oil. This also puts the whammy on any timetables for growing free cash flow. That was kind of three in one. The other is JP Morgan analyst Stephen Tusa. Tusa is not quite as excited about GE's quarter as are many of his colleagues, and Tusa has a history of being right on GE. Tusa sees EPS for the quarter at $-0.03, and does see the path toward as quick a recovery in free cash flow as do the rest of us. Tusa also does not have a price target on the name. He rates GE as a "Hold". 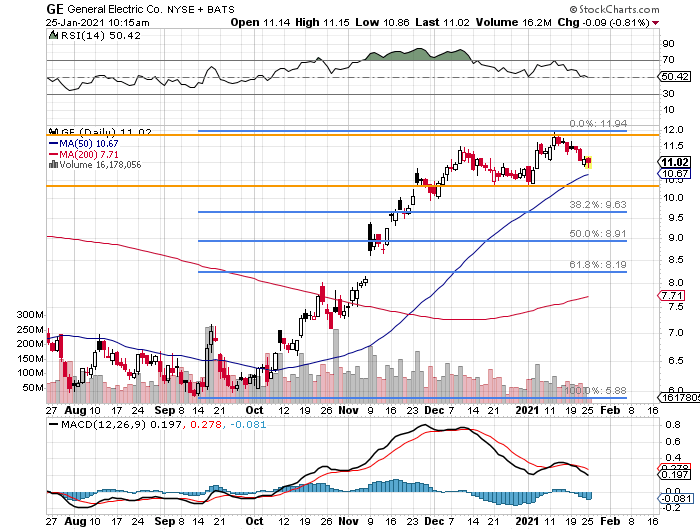 What we see here is a stock that had run nicely from early October through mid-December. The stock then entered into a basing period of consolidation. The pivot on a breakout to the upside would be the high of that period, just below $12. A move past pivot would allow for a target price of $14.25.

Support on post-earnings weakness will likely be found at the 50 day SMA of $10.67. Should that level not hold, then we'll have to fall back on Fibonacci levels that don't even get started until the shares fall to $9.61.

Notes: The purchase of the $11 call expiring this Friday allows the investor to double the investment quickly on a favorable reaction to earnings this week. The sale of the higher priced and longer dated put both pays for the purchase of the call and still reduces the net basis for the equity purchase. The investor would remain exposed to potentially increased equity risk at a net level below a 38.2% Fibonacci retracement of the late 2020 surge in GE's share price over the next six months, unless this individual position is covered.

Get an email alert each time I write an article for Real Money. Click the "+Follow" next to my byline to this article.
TAGS: Earnings | Economy | Investing | Options | Stocks | Technical Analysis | Trading | Aerospace | Industrials