General Electric Co. (GE) was left for dead. Going from an iconic name that was in the DJIA forever, it made many business mistakes taking itself down to single digits and sharply reducing the dividend that everyone counted on for years and years. Instead of bringing good things to life it brought angst to thousands of loyal share holders from Groton, CT to pensions and portfolios around the world. Not pretty.

GE is poised to open higher this morning it the wake of selling its BioPharma unit. Let's check out the charts and indicators on GE again to see if these gains are sustainable or not.

In this daily bar chart of GE, below, we can see the price action through Friday's close. We can use our imagination to "see" prices around $11.75 this morning. If GE can maintain the opening gains it would mean a new high close for the move up from the December nadir.

The daily On-Balance-Volume (OBV) line shows a step-like move up from December signaling some more aggressive buying which is something not seen on GE for some time.

The daily Moving Average Convergence Divergence (MACD) oscillator crossed the zero line in January for an outright go long signal. Recently the MACD oscillator rolled over for a take profits sell signal. Today's price strength may or may not turn the MACD oscillator back to bullish.

In this weekly bar chart of GE, below, we can see some interesting developments. Prices are below the declining 40-week moving average line and we won't know until this Friday whether GE can actually close above the line.

Trading volume has been heavy since October and could signal a shift of ownership from weak hands to strong hands. I say "could" because GE is so widely held in portfolios it may take a much longer period of time for GE to find new longs and build a strong base.

The weekly OBV line shows an up move the past three months and the MACD oscillator on this longer time frame crossed to a cover shorts signal last month.

In this daily Point and Figure chart of GE, below, the chart is projecting a move lower but this chart does not have the rally to around $11.75 this morning. 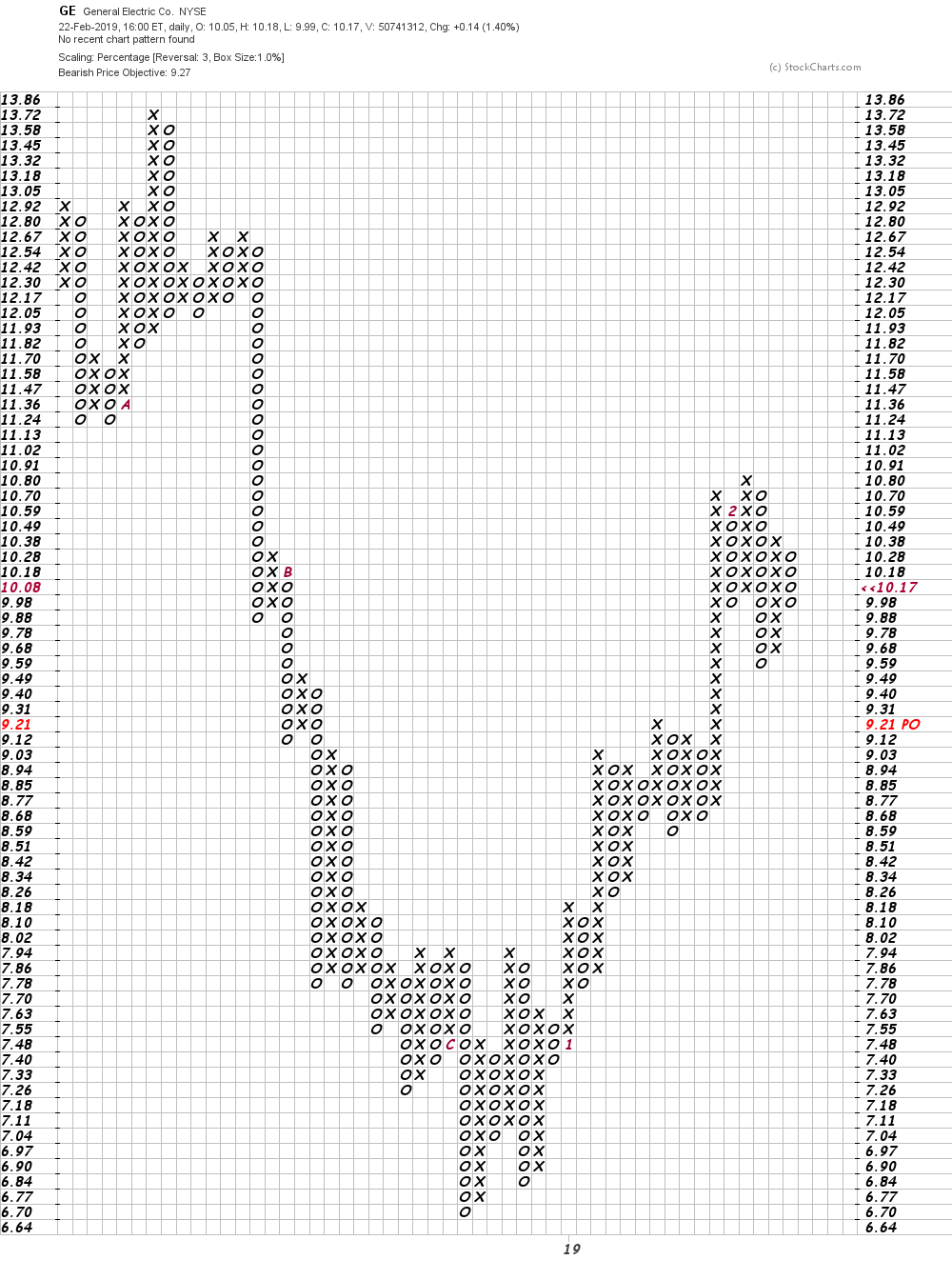 In this weekly Point and Figure chart of GE, below, the chart is projecting an upside price target of $13. A big percentage move for traders but not enough perhaps for longer-term investors.

Bottom line strategy: Analysts may be cheering that GE is getting its house in order but so much damage has been done to the long-term charts I believe it will take a much longer period of time to truly turn the charts around. GE has a lot of overhead chart resistance and not a big enough base pattern for me to become a buy and hold investor. I would take this as a trading opportunity for now.

Get an email alert each time I write an article for Real Money. Click the "+Follow" next to my byline to this article.
TAGS: Investing | Stocks | Technical Analysis | Trading | Consumer Cyclicals | Industrials | Stock of the Day

These 2 Crown Jewels of the Electric Vehicle Industry Remain Private

They are Rivian and Lucid, with Chanje close behind.

It's Not All Fun and GameStop

The charts of GME still look risky to me, and here's the price I'm watching.