General Electric, Co. (GE) is once again in the news and once again our Stock of the Day here at Real Money after CEO Larry Culp issued a 2019 profit forecast that fell short of expectations.

The conglomerate anticipates 2019 adjusted earnings to be between $0.50 and $0.60 a share, below the $0.70 cents a share analysts on Wall Street expected. "We have work to do in 2019, but we expect 2020 and 2021 performance to be significantly better," Culp said in a statement. At last look GE was showing a 3% gain ahead of Thursday's opening despite the disappointing outlook. GE may be a moving target, but what do the charts and indicators look like here on Thursday?

We looked at GE back on March 6, so I do not anticipate much change overall. In this daily bar chart of GE updated through Wednesday's close, below, we can see that prices were soft/weak earlier this month with GE retesting the rising 50-day moving average line. Trading volume was between 100 million and 200 million shares, so there was some "voting with the feet" or the mouse by traders and investors. Investors tend to anticipate (correctly or incorrectly) news such as earnings, so we could have GE closing higher here on Thursday despite what appears to be bearish news (above).

GE is and has been a widely followed company on Wall Street, so the latest announcement may be a non-event for many. Meanwhile, GE is still below the declining 200-day moving average line. The daily On-Balance-Volume (OBV) line is inching up from December but still not what I would call robust. Yes, there is some buying going on, but a widely held stock such as GE needs lots and lots of buying to move it up. The daily Moving Average Convergence Divergence (MACD) oscillator is in a take-profits sell mode from early February but could turn up to a fresh outright go-long signal -- it all depends on the price action from here.

In this Point and Figure chart of GE, below, we can see the price parameters that will influence this chart. A trade at $10.18 will help, but a trade at $10.59 is even better. A decline to $9.03 will be a new low for the move down and is likely to open the way to further losses. 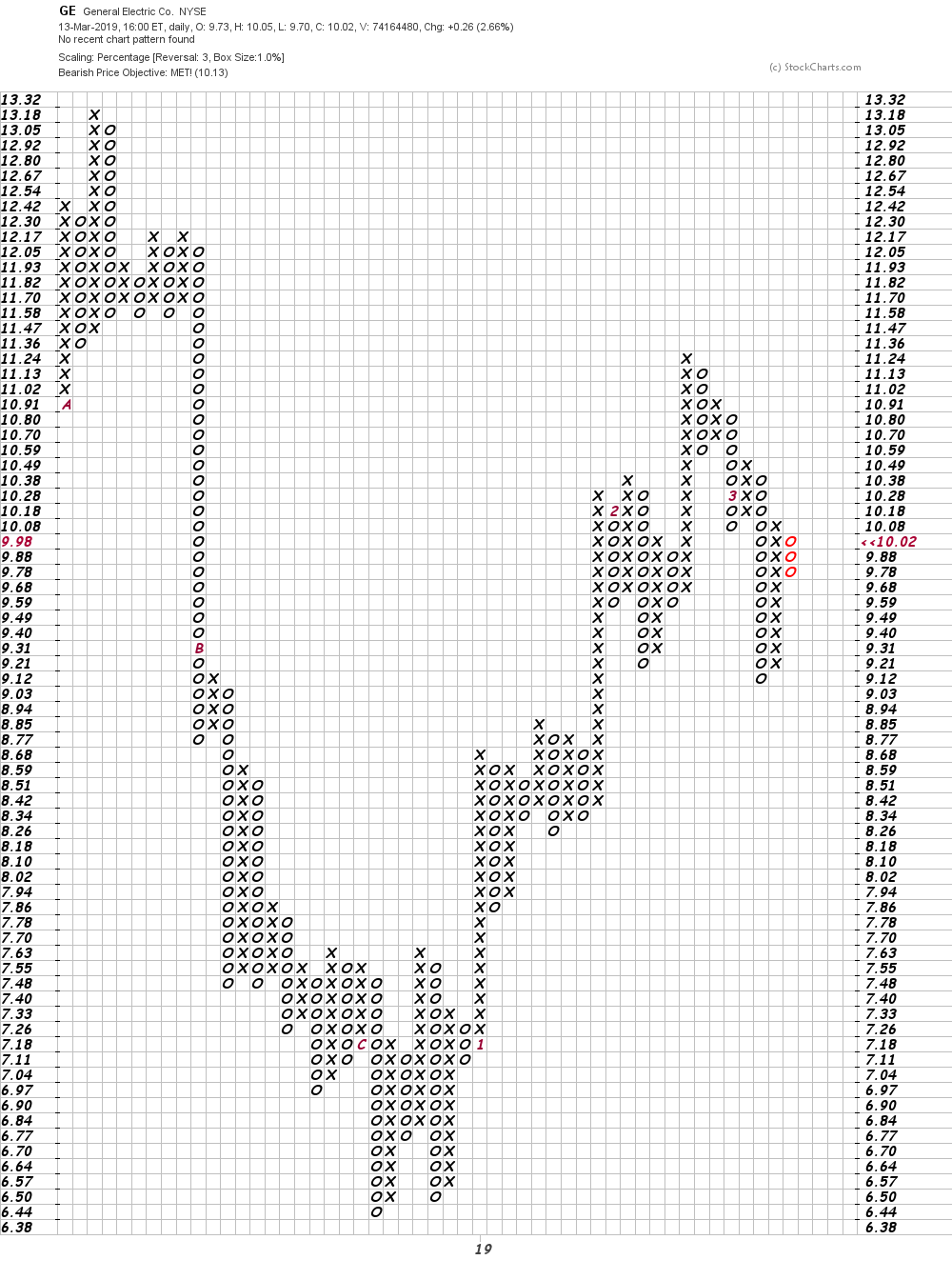 Bottom line strategy: Not much has changed from March 6 and our last review. GE is a huge conglomerate with millions and millions of shares outstanding. It is like a huge battleship that takes miles to make a turn. GE will take months and months to build out a proper base that can support a sustained move. Management has their work cut out for themselves. Traders should look for opportunities in stocks that are outperforming the broad averages.