The Lightning Round segment of Mad Money is very popular with viewers. This is when a few lucky callers get to grill Jim Cramer about stocks they are interested in. Tuesday night one caller asked about Generac Holdings (GNRC) : "I've been behind Generac for a long time. That was a great quarter," replied Cramer.

Let's check out the charts of GNRC. We last reviewed GNRC back on October 7 and wrote that "Traders looking to go long GNRC should try to buy a shallow dip towards $200 risking a close below $190. $223, $250 and now $285 are our price targets." Prices reached and exceeded all our price targets and more. Now what?
In this daily bar chart of GNRC, below, we can see that prices ran up into a high in February. Prices corrected downward into early March and have since traded sideways. Trading volume is hard to read except for a spike in March.
The On-Balance-Volume (OBV) line is a problem as it shows a long decline from November and another decline from February telling us that sellers of GNRC have been more aggressive for months.
The Moving Average Convergence Divergence (MACD) oscillator peaked in February with prices and is now very close to the zero line and perhaps a sell signal in the near future.

In this weekly Japanese candlestick chart of GNRC, below, we can make some interesting observations. Prices are still in a longer-term uptrend and the slope of the lagging 40-week moving average line is still positive. We can see both lower shadows in March (a positive) and upper shadows in April (a negative).
The OBV line shows weakness from February and the MACD oscillator crossed to the downside last month for a take profit sell signal.

In this daily Point and Figure chart of GNRC, below, we can see a downside price target around the even number of $300. 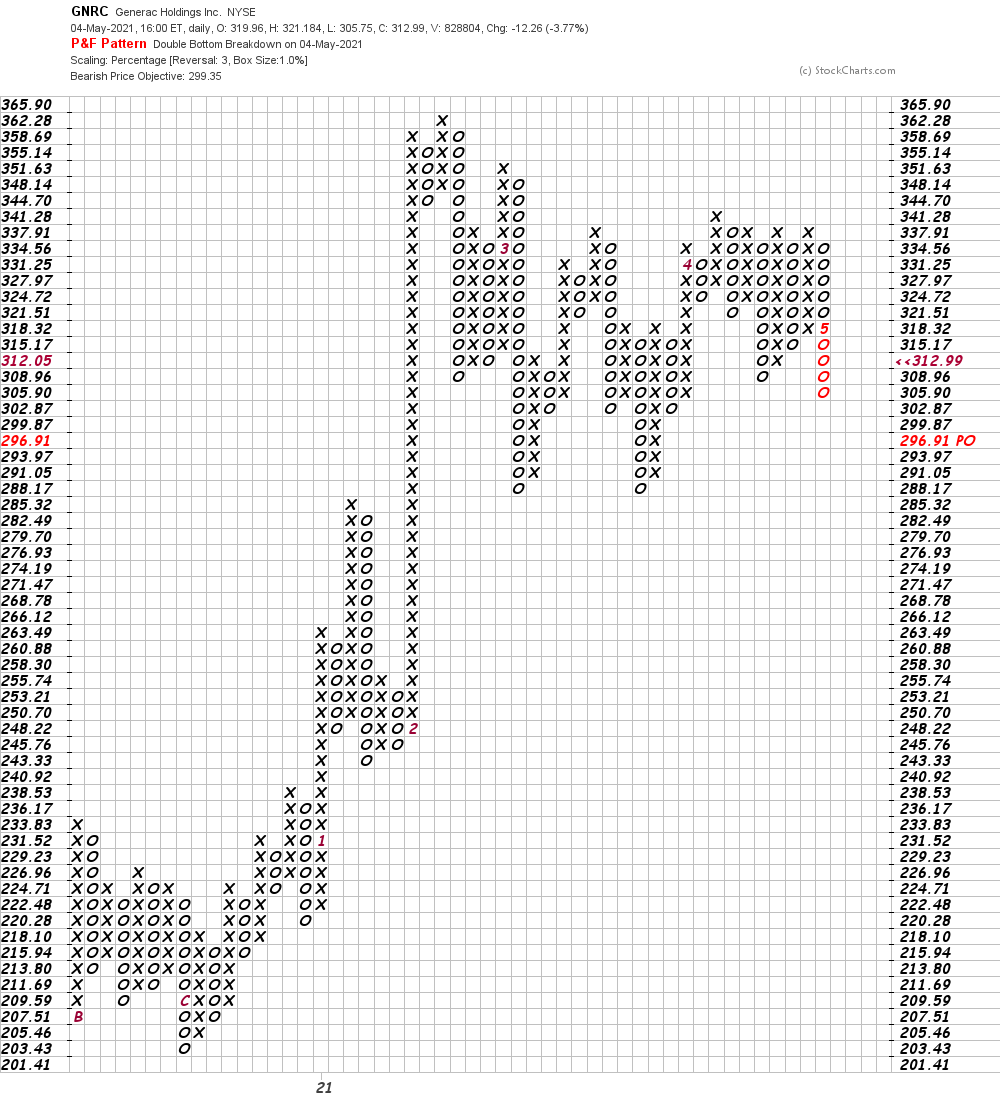 In this weekly Point and Figure chart of GNRC, below, we can see a potential downside price target in the $273 area.

Bottom line strategy: GNRC has made a significant rally the past two years so a period of consolidation or even a downward correction should not come as a big surprise. Traders should avoid the long side of GNRC and let this correction play out.
Get an email alert each time I write an article for Real Money. Click the "+Follow" next to my byline to this article.
TAGS: Investing | Stocks | Technical Analysis | Trading | Energy | Technology | Industrial Goods | Mad Money