GE posted adjusted EPS of $0.35 (GAAP EPS: $-0.14) on revenue of $19.1B. Bottom line performance, even adjusted, fell well short of expectations, while the revenue print did beat Wall Street.

Cash from operating activities hit the tape at $1.3B, while free cash flow showed at $1.2B. Notably, in the press release, Chairman and CEO Larry Culp stated, "Our planned spin-offs remain on track with GE Healthcare ready to go in the first week of January."

Total assets add up to $180.877B including $33B in "goodwill" and other intangibles. At 18% of total assets, this is not outlandish in the least. Total liabilities less equity come to $148.124B. This includes $26.121B in long-term debt. I would like to see either more cash on hand or a reduced debt-load. That said, this balance sheet, though not a work of beauty, does pass the smell test. The balance sheet is not a problem.

I don't love these earnings. Renewable Energy appears to be a train wreck. Aerospace, to me, seems to be the only completely healthy segment. Margin is going the wrong way for both GE Healthcare and at GE Power.

That said, I can see the attraction of the coming three way split for investors. GE Healthcare is self explanatory and should be a sustainable business. Will it grow? I don't know. GE Aerospace will be the crown jewel of the three. That will probably be a desirable stock to own. Then there will be GE Verona, which will be the combination of the renewable energy and power business as well as the firm's digital properties. That last one might turn out well, someday, but possibly not that soon. 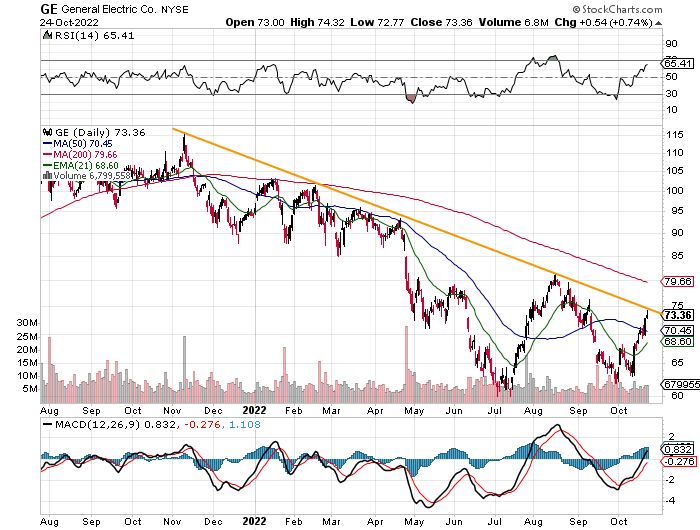 GE opened Tuesday morning above a descending trend line that has been in place for about a year without being violated. Since mid-October, GE has taken back its 21 day EMA and 50 day EMA. Now, the shares will be asked to hold onto a breakout beyond that trend-line and then tackle the 200 day SMA at $79. Seems like a lot to ask just because the company is splitting up and free cash flow projections were down, but not down that much.

Instead of chasing the stock today after an earnings report that did not knock anyone's socks off, and given that the stock has touched its 50 day SMA three times since the start of September, my plan if I wanted to be long this stock by years end, would be to sell equity risk at that line over time rather than straight up pay for an equity stake.

Get an email alert each time I write an article for Real Money. Click the "+Follow" next to my byline to this article.
TAGS: Earnings | Investing | Stocks | Technical Analysis | Trading | Technology | Industrials