Analysts have egos and they have a need to be right. They will buy in adversity (a downtrend), do not have strict loss parameters and will reiterate buy recommendations even when the market ignores their sage advice.

Successful traders, on the other hand, tend to not have big egos and only want to be right on a series of trades. They know they will be wrong at times and they are disciplined to sell losers.

Let's keep that in mind this morning as we look at General Electric (GE) again.

The investing world learned quickly today that Stephen Tusa of JP Morgan upgraded GE to "Neutral" and removed it from the Analyst Focus List as a short idea. Tusa has been bearish on GE since May 2016 and has maintained a "Sell" rating on the stock until now. He lowered his price target five times in 2018. He gets an "at a boy" for a rare sell recommendation and benefited by a downtrend that started in early 2017.

GE is still in a downtrend with no signs of a base, in my opinion, so Mr. Market may have a different view of GE. Let's check the charts and indicators again.

In this daily Japanese candlestick chart of GE, below, we can see a persistent downtrend - lower lows and lower highs. The slopes of the 50-day and 200-day moving averages are negative and have been all year.

The daily On-Balance-Volume (OBV) line is pointed down, telling me that sellers have been more aggressive.

In the lower panel is the 12-day price momentum study which shows that the pace of the decline has slowed since November. Prices made a small gap to the upside and journalists impressed with percentage changes will be the only ones excited.

Yesterday or today could be a low for GE but it is not a bottom. A bottom is a process and it takes time. It takes time for a large corporation to make a turnaround. Things do not happen overnight. GE will need a long period of sideways price action to lure investors back. Traders will not come back until a new uptrend has been established. Successful traders follow the trend and for now the trend is still down.

In this weekly bar chart of GE, below, we can see the sideways trend of 2016 and the start of the decline in early 2017. GE is still below the declining 40-week moving average line.

The weekly OBV line is pointed down and the Slow Stochastic indicator is "buried" in oversold territory.

In this Point and Figure chart of GE, below, we see can the decline in the price of GE. A bottom has not been established and a trade at $8.02 is needed to improve this chart. 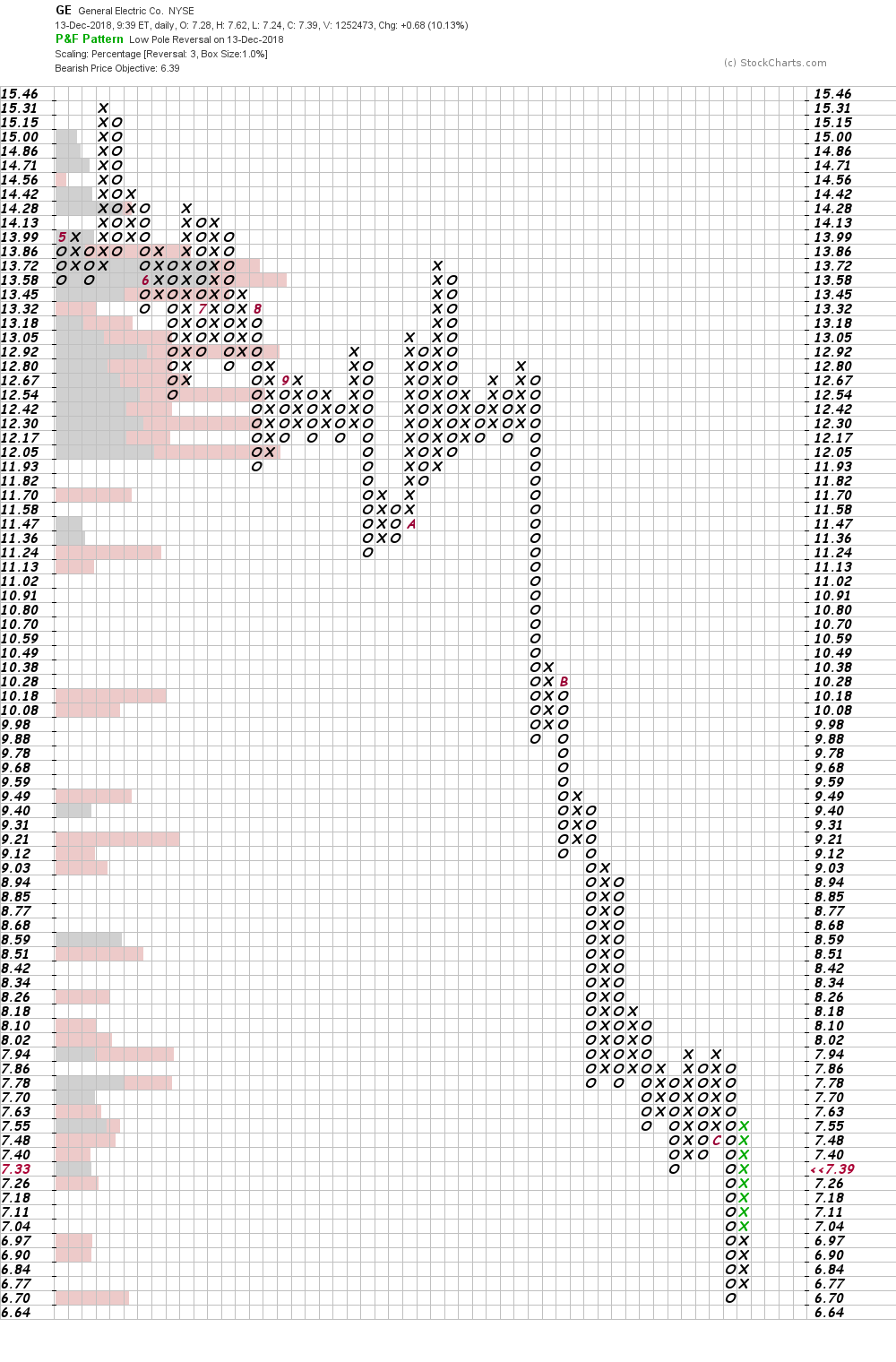 Bottom line strategy: It would be nice to believe that we are looking at the low for GE but the reality is if GE is bottoming it will be a process.

Get an email alert each time I write an article for Real Money. Click the "+Follow" next to my byline to this article.
TAGS: Dividends | Investing | Markets | Stocks | Technical Analysis | Trading | Health Care Equipment & Services | Conglomerates | Industrials | Stock of the Day