Cover and Concealment. Not one and the same. The difference is quite simple. If it physically protects you, it's cover. If all it does in hide you, or make you difficult to see, it's concealment. A boulder provides cover, as do let's say utility stocks or any high dividend payer when supply at the point of sale outweighs demand. Camouflage would be an example of concealment. Equity markets have been on the rise, almost non-stop since last Wednesday. Makes some sense that a routine pull-back would be in the offing. No?

Investors able to watch the markets from a distance might feel that equities have run unabated now, since jolly St. Nick showed up just on time in late December bearing a sack full of goodies. The truth though is that though January's action may have presented as a relentless upward climb, the action since has had some give and take, and there has at times been some distribution concealed by the overall rally along the way. Distribution, for the new kids, are trading sessions where a broader equity index sells off on higher volume than the day prior. This can indicate institutional selling. Certainly, not rocket science. Certainly worthy information. Might tell traders when markets are perhaps getting toppy, or at least choppy. Over the past month or so, we have seen the number of these type of days increase to a level that causes your old pal to take at least some notice.

Back to the question at hand. Is a pullback on our doorstep? I told readers and viewers alike in recent weeks that some of my models were showing significantly higher equity prices to our front. Short-term, the headlines will focus on U.S./China relations. This will provoke algorithmic response and perhaps human opportunity. The Dance. Remember this when you get nervous, and most of you will get nervous. A deal boosts hope for improved growth. Still growth will not be as robust as many had hoped, here, or in China. Growth will still need to be fed, to be coddled like never before. Or before the last decade at least.

Now, fundamentally speaking... An era of low to moderate growth that coincides with a period of low consumer level inflation at a time while monetary policy and fiscal policy are both forcibly loose is the environment provided. We are to excel in this environment. That's our mission. Does anyone not see great potential for expanding valuation metrics in this environment? TINA? On top of this, the bar for the upcoming Q1 earnings season has been set low. There is now great potential for the widespread beating of expectations. Poor quality, you say? No argument here, says I. We are not discussing quality, or even right or wrong. We are discussing how to accomplish our goals. Only. My old friend on the trading floor, Ben Willis, who I bet most of you will remember, used to say it all the time: "Buy what you like when it's on sale." Ben used to have a shopping list, just like you might have going to a grocery. When Ben's stocks went on sale, he bought some. How simple. How incredibly genius.

So far, equity indices have held at higher levels. The S&P 500 (SPX) works it's way toward 2900. The Nasdaq Composite (COMP) toward 8100. The Philadelphia Semiconductor Index (SOX) reaches new records. Demand for the safety of U.S. Treasuries has eased a bit. Crude screams. WTI still trades above the critical $62 level even after a massive inventory build had been reported by the EIA. Brent still hovers at $69, just beneath the $70 level that is believed to be the primary target price of the Saudis.

News has made the rounds that President Trump will meet with China's Vice Premier Liu He on Thursday (today), while the vice premier is in D.C. to negotiate with the administration's chief lieutenants on the issue. Speculation is rising that the president will use this event to possibly announce plans for a summit date with President Xi Jinping of China. The market will surely move on this event, whether or not there is news.

I would welcome but I have serious doubts that the Chinese side would agree to forcibly reduce the trade gap, agree to structural reforms to domestic market entry, and agree to properly police theft of intellectual property (Larry Kudlow did say on Wednesday that China had finally admitted that the U.S. has a point on this issue.) without seeing tariffs removed immediately. By the same token, I can not see President Trump removing what has proven to be the only financial weapon used by any recent administration that has forced the Chinese side to take notice, and without a verifiable path toward enforcement that comes coupled with a Chinese pledge to forego retaliation should the U.S. feel forced to take punitive action in the future.

Though both heads of state have obviously felt the heat throughout this "trade skirmish", U.S. Q1 GDP now looks to be in a far better place than it was just a month ago, while the Chinese economy appears to be reacting well to stimulus provided ahead of the Lunar New Year. That may be seasonal. We'll see, but this could lend to each leader the perception of being the one negotiating from a position of strength. Intellectually thrilling material all around.

The Next Industrial Revolution

Network speeds of up to 100 times faster than what is currently possible. Augmented reality. Greatly improved gaming performance. Online experience that will go way beyond what we as consumers can even imagine. Just think of the new businesses that this will spawn. Oh boy. Listen, I hope the 5G era is a breakthrough era. I hope you all enjoy being even more glued to your mobile devices than you are now. Remember back when people in New York moved quickly? Now they all skate with their heads down. Maddening.

I for one, will still intentionally "forget to bring my phone." I will still spend time enjoying the slowed down entertainment of both baseball and chess. I still love the extreme thrill of danger. Of not being sure that you're going to be able to get out of a jam in one piece... with nothing to rely upon except your mental and physical conditioning.

That said, I wake up every morning with the intention of turning a few dollars into a few more dollars. I am old. I am no longer the demographic that those who shape modern culture are trying to sell to. I realize that, which is why I think every investor needs to have some exposure here. Verizon (VZ) , a name that I am long, launched on Wednesday in the Chicago and Minneapolis areas 5G service for the very first time. For now, that service will be limited to the Motorola Z3. Half a planet away, two carriers, SK Telecom (SKM) , and KT Corp. (KT) launched service in the area of Seoul, South Korea. Usage there will at this point be limited to the Samsung Galaxy S10.

5G infrastructure here in the U.S. is a long way from being ready for widespread use. I will most likely hang on to both Verizon, and AT&T (T) for this reason. Verizon has far outperformed AT&T over the past year, though those tables have turned in recent weeks. They both pay handsome dividends. I am thinking about those Korean ventures. Already tens of millions of South Koreans live in 5G serviced areas on day one. Both SK and KT are listed at the New York Stock Exchange in ADR form. Both have performed miserably in 2019. Both have regularly reported revenue with minus signs in front of the number in terms of year over year growth. Does that change now? Both trade cheap enough to play small, but only speculatively. Mad money.

Upping My Price Target for Apple

Remember, we are talking about my money here. This is not advice, but simply show and tell. About two weeks ago, I wrote to you about the $197 level for Apple (AAPL) , which had been my target price, and perhaps the need to change that price. The name hit $197 that morning, and sold off, which is fine. That minor selloff created a handle to go with our cup. Let me show you. 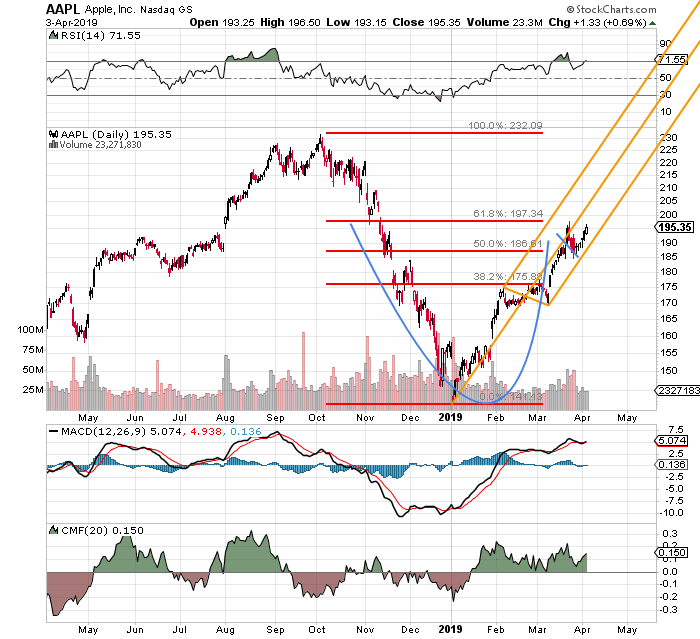 Now, $197 remains our pivot. Given the depth of the cup, a rough 39%, and the fact that the depth of the handle was kept neat and tidy, my thought is that if AAPL can take down the $197 level on this attempt that potentially, the move beyond that has an excellent chance to be successful. Upon another failure here, the name likely retests the very recent lows in the $180's. I need to see a "take and hold" of $197. We get that, my thought is we'll need new running shoes. As my net basis is in the low $140's, I will need to take something off above pivot. That's discipline and not indicative of how I feel about the name.

Get an email alert each time I write an article for Real Money. Click the "+Follow" next to my byline to this article.
TAGS: Economy | Investing | Markets | Options | Stocks | Technical Analysis | Trading | China

The Dow Frowns, but I'm Smiling

The Dow is finally starting to close the gap with all the stocks that have been suffering for months, and that is a relief.

Jim Cramer: Here's How to Make GameStop a Winner

I've got a game plan that could make this once-fading brick-and-mortar video game business the only game in town.