Gap, Inc. (GPS) is soaring this morning in pre-market activity as traders react to the announcement that along with their Q4 results the clothing retailer announced restructuring plans which will include the spin-off of Old Navy. The company also plans the closing of about 230 Gap specialty stores over the next two years.

GPS was trading up about $5 or so with shares around $30. Our charts have not updated yet so let's see what we can infer with the data through Thursday's close.

In this daily bar chart of GPS, below, we see no technical hints or clues about this bullish move. Prices have been in a downtrend the past 12 months and the only hint of a turn is that prices have been finding support in the $25-$24 area.

The slopes of the 50-day simple moving average and the 200-day moving average have been negative for months. The other day GPS did close above the declining 50-day average line but it was more from trading sideways than from rallying.

The daily On-Balance-Volume (OBV) line has been in a downward trend from June and August and only made a minor uptick in recent days.

The daily Moving Average Convergence Divergence (MACD) oscillator has been below the zero line in bearish territory for much of the past 12 months.

With prices anticipated to open with a gap to the upside (sorry, no pun intended) the 200-day line will be broken. Looking back at the May-August time frame on the chart below we can see that this former support area from around $29 to $34 is likely to become a resistance area.

In this weekly bar chart of GPS, below, we can see that prices are higher than they were in May 2016 but they are only even with where they were three years ago - frustrating for investors.

GPS is below the declining 40-week moving average line but that should change with today's close.

The weekly OBV line shows a decline from early 2018 and the weekly MACD oscillator looks "lifeless" below the zero line.

Judging by the width of the pattern going back to October (look for the "A" on the chart) we could have an upside price projection in the mid-$30's. 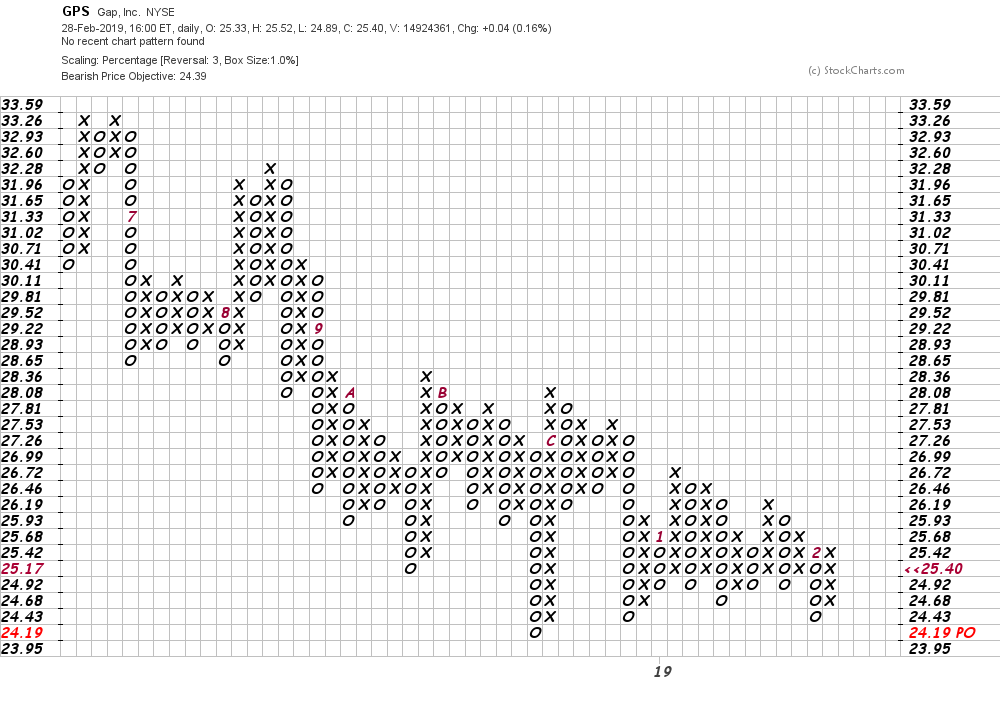 Bottom line strategy: According to www.shortsqueeze.com there were approximately 26.7 million shares of GPS shorted (up from 25.3 million in the previous monthly report from the exchange). These shorts will be feeling some pain in their wallets this morning and they will be active buyers. Until these buyers are satisfied it will be hard to determine what GPS might do in the days and weeks ahead. Technical analysis has its limitations.

Get an email alert each time I write an article for Real Money. Click the "+Follow" next to my byline to this article.
TAGS: Short-selling | Earnings | Investing | Stocks | Technical Analysis | Trading | Apparel | Retail | Stock of the Day

Oversold Market With General Gloom And Words of Caution

We have an oversold market with a minor positive divergence, general gloom and words of caution.