On October 4th, I wrote a piece for Real Money with the title "I'd Be Real Careful About Shorting Any Tesla Shares at This Level." Good thing. Tesla (TSLA) was still a couple of weeks out from reporting some better than expected top and bottom line numbers for their third quarter, and I had recently covered a short position at the time. The last sale at the time I wrote that piece was $804.36.

On October 22nd, I touched on Tesla again, covering for Doug Kass who was off for one day at his diary, which is available only at Real Money Pro. I pointed to what I saw as warring technical pattern developments. I wrote at the time that I saw a double bottom with a $780 pivot ($975 target), and a cup (no handle) with a $900 pivot ($1,125 target). I also pointed out that should a handle form that the pivot would shift from the left side of the cup to the right. That had not happened yet, and might be right now.

I also overlaid a Pitchfork pattern over the stock's rise since May, and showed how TSLA had at that time broken out of the lower chamber and into the upper chamber of that Pitchfork. Oh.... The shares ran 43% for the month of October, by the way, and traded at an all-time high of $1,243.49 as recently as last Thursday. For disclosure purposes, I have not been short Tesla shares since. I have been long for a couple of trades, both times making money. Both times would have been better served as "buy and hold" investments. I am, in fact, long the name on this morning's dip as I write this piece, having grabbed a few shares shortly after ARCA opened on Monday morning.

On Saturday, Tesla CEO Elon Musk decided to take a poll on Twitter (TWTR) , asking his followers if he should indeed sell a 10% stake in his holdings of TSLA shares. Musk is estimated, at Friday's closing price, to own $210B worth of TSLA. A 10% stake would amount to roughly $21B. Musk said that he would abide by the vote's final tally, which as it turned out, after more than 3.5M votes were cast, was not close: 58% wanted Musk to sell, probably in the hopes that they themselves might capture a lower price for entry or for an addition. The fact that Musk would probably make the sale over a lengthy time period through an investment banker apparently lost on the Twitter crowd.

There could be any number of reasons for the Musk PR stunt. For one, with Lucid (LCID) coming off positive reviews after making some initial deliveries, Ford Motor (F) suddenly becoming an aggressive EV player, and Rivian (RIVN) abut to make that firm's public debut, it's a way to keep Tesla at the top of the news cycle and steal some thunder from the competition.

Then, I saw Robert Rank's article at CNBC dot com. I don't know if Frank broke the story, but he did for me. According to Frank, Musk was awarded options in 2012 (Musk does not draw a salary or bonus as compensation) that if exercised will turn into 22.8M shares with a strike price of $6.24. That's right... $6.24. The shares closed on Friday at $1,222.09. These options expire in August 2022. The gain of this trade will amount to slightly less than $28B.

According to the piece, the $28B "windfall" is subject to top ordinary income rates as they were part of employee compensation. That's 37% plus a 3.8% net investment gain. Frank elaborates... Musk will also have to pay a 13.3% top tax rate in the state of California as he was a California resident at the time of award. At the end of the day. Musk's $28B payday is going to be subject to a total tax bill of 54.1%, or $15B give or take a few nickels or dimes.

Oh, if you read the whole article, you find out that this will not be the first time that Musk will face in coming years the likelihood  - should Tesla remain a highly valued stock - of a windfall level payday, with a need to make a large sale in order to pay the taxes.

Bottom line? Can't say this for sure, but it appears very likely that Musk knew that he had to make a very large sale and simply made a a game out of it with his fans... and to steal some thunder from Lucid, Ford and Rivian. 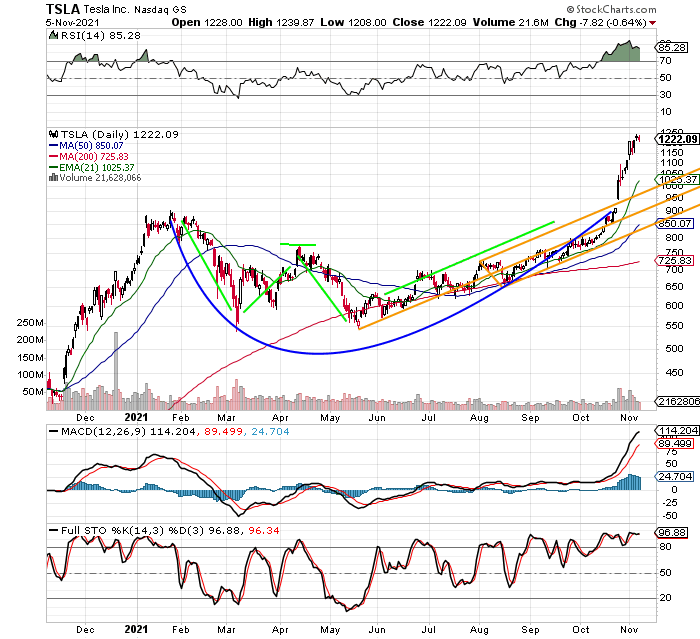 This is an update of the Chart that I posted to Dougie's blog back on October 22nd. Readers will see that the potential breakouts from the cup and double bottom patterns have far exceeded potential target prices. TSLA has even made mincemeat of my Pitchfork model. The one possibility left that I brought up that day, would be the addition of a handle at this level, that would really make the cup with handle pattern look more like a soup ladle. Still, this also sets up a pivot at last week's high of $1,249.

That would place a new technical target price somewhere - no, I am not sure yet - in between $1,500 and $1,560. Of course there still is a little something for the bears to latch onto. There remains an unfilled gap between $910 and $944 from the third week of October.

I see two five star (at TipRanks) analysts who have opined on Tesla either on Sunday or this morning. Philippe Houchois of Jefferies increased his price target from $950 to $1,400, while maintaining a "buy" rating. Then there's Dan Ives of Wedbush. Ives has a "buy" rating and an official price target of $1,100, but increased his "bull case" for the stock from $1,500 to $1,800 driven by demand for electrical vehicles in 2022. Ives stresses that the "linchpin" to Tesla's success remains China, and expects that nation itself to receive 40% of the firm's deliveries next year, while the just passed infrastructure bill bolsters the EVC adoption curve in the U.S.

I'll continue to trade Tesla. I have (knock wood) now had a very long string of successful trades in this name. Then again, TSLA has not exactly been a difficult name to trade for a while. I'm still not brave enough to short the darned thing. Could the stock move to fill that gap in the lower $900's and still manage to hit my quasi-$1,500 to $1,560 target price next year? The fact is that nothing would surprise me less.