I am fascinated that there seems to be someone out there who thinks volatility is around the corner. This is because for the third straight day the put/call ratio for the Volatility Index was under 20%. Two consecutive days does not occur frequently; three occurs even less so.

This is the second time this year we've seen three consecutive days with the put/call ratio for the VIX so low. The last time was in March and was bullish for stocks. Prior to that there was a three-day run in October 2017. Prior to that we have to go all the way back to 2007. Yes, a decade. The year 2007 was also the last time we had two such instances of three-straight days with low readings.

That year there were seven such instances. Two of those went to four days in a row. What's even more fascinating is that six of those occurred in the first quarter. As a reminder, the S&P 500 topped out in October 2007. Here is the chart of the S&P from 2007. Look at all of those red arrows (representing three or more days of such low readings) in the first quarter. Three of them were in the month of March.

In each case the market had an outsized move within a month. The folks who bought all those VIX calls in July must have been paid handsomely; those who bought in March, perhaps not so much. I still believe it portends a sizable move, with higher volatility coming.

Away from that, there was something a little bit different to show up in the indicators after last week. The cumulative advance/decline line (breadth) has gone from leading to keeping pace. Last week it failed to make a new high along with the S&P. That is new. It is awfully close, so if breadth is good on Monday it can correct that minor divergence.

But when we look at common stocks only we see it made its high the first week of July. That's a divergence, especially since it's been three weeks since then.

One final indicator I want to share with you is the National Association of Active Investment Managers (NAAIM) Exposure Index, as it is now back to where it was in April. It peaked just shy of 100 in October and just over 100 a years ago. This sentiment index is getting a bit long in the tooth now, too. 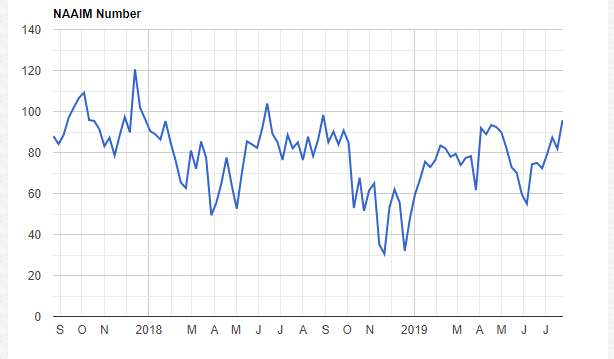 We've got quite a newsy week ahead of us with the Fed announcing a possible rate cut, trade meetings over tariffs with China, the end of the month, and the employment number due Friday -- not to mention there are still plenty of earnings to come. I still think we should see volatility rise.

Get an email alert each time I write an article for Real Money. Click the "+Follow" next to my byline to this article.
TAGS: Federal Reserve | Futures | Investing | Stocks | Technical Analysis | China |

Financial Transaction Tax: The Elephant in the Room for Commodity Markets

If applied to derivatives as has been suggested, the tax would eliminate most speculators and liquidity would implode.

Tracking Visa and the S&P 500 for Tradable Lows

Movements this week in the stock and the index will dictate whether to act or to stand aside.

Here's why grain prices are softening on the news of the China trade pact that promises huge buys of U.S. corn and soy.

Should You Buy Gold on Iran Conflict?

There are 2 trades now, depending on how you see the Iran conflict playing out.