There's a short period of time, probably just a second or two that feels like much longer. The door at the front of the vehicle lowers. You play follow the leader right off of the boat. Before there is time to think you're under water. Weighed down. Boots. Helmet. Full pack. Weapons. Ammo. You can't breathe. Now what. Better figure this out for yourself... without losing any gear. A few hundred yards later, caked head to toe in the disgusting rot that lay beneath the canopy of the jungle, very much grateful for the oxygen that now seems plentiful, the mind seeks cover. Cover from the pretend communists that we were up against that day. First amphibious landing. One wonders, how on earth braver people on much more dangerous days ever did this while taking fire.

Monday was quiet. Equity markets inched their way higher on light volume. The silence of these markets would be expected, with the mayhem of "quadruple witching" expiration still visible in the rear view mirror, and the entirety of the FOMC and their dog and pony show still to the immediate front. One would think that Tuesday, and maybe even most of Wednesday, may offer a bit more of this type of behavior, as forces that be (algorithms) try to put some distance between the 2815 level for the S&P 500 and where they are now (2833). Something to keep an eye on... the Dow Jones Industrial Average, underperforming the S&P 500 for more than a week as the issues regarding Boeing's (BA) 737-Max aircraft have developed, is now on the doorstep of a "golden cross". For the DJIA, the 50 day SMA now stands just 30 points below the 200 day SMA. Such a cross-over, though not a rule by any stretch, would be considered bullish by most traders.

It is with a certain level of alarm that I watch from my perch, the ease by which a number of Americans seem to be drawn toward a more socialist system, and further away from what I have always been grateful for... the freedom offered by a free-market economy. I know from my own experience that in a state controlled system that I could never have experienced the ups and downs that a long career on Wall Street has both offered and forced up my life. I could never have eventually have worked for myself after a very modest upbringing.

Politician after politician seems to be moving away from center...away from what had made this country so exceptional in the first place, and toward a system that has done nothing but fail over a century, repeatedly resulting totalitarianism, poverty, and control of the many by an elite few. I would think that history paints an obvious picture but just as obvious is the fact that enough folks disagree with how I see the world. They embrace the rhetoric. No purpose is served by simply scoffing at the folks who turn toward central planning as an answer. Serious attempt must be made to understand why they are turned off... why they don't trust their own ability, and why they feel a need to be rescued by someone else.

There are perhaps many causes for this effect, but I would think chief among these reasons is the lack of real world preparation found at the modern college campus, and the cost associated with that education. Student debt, and the lack of an overt competitive advantage in the labor market certainly turn off a number of younger adults. The absurd cost of home ownership that deprives many of the standard of living once enjoyed by their parents. I do understand that there is less opportunity now than in the era when I came up. In my youth (once upon a time...), if you were willing to pick up a mop and wipe tables all day, if you were willing to go get the coffee and the sandwiches....someone would hire you. Not so sure that's always true now.

Simply, socialist policies destroy output. In a free market system, the needs (and wants) of the masses determine demand. This creates levels of value (prices) to be placed upon various goods and services across the entire ecosystem, based on the cross-section of this demand versus scarcity. In turn, that scarcity or lack thereof, will drive production resulting in supply. The whole ball of wax tied up in a neat, simplified bundle.

Now, suppose, we remove the forces of demand and supply as the determinant factors of just how an economy should develop. Replace this "point of sale" mechanism with an ever increasing reliance on regulation, taxation. public debt/government spending, and central control. My thought is that there would be an almost immediate reduction in productivity. This is in my opinion is inevitable. In turn, a lack of decision making at the personal and small unit level will stagnate any thought of upward mobility, which in turn will dis- ambition, resulting in a broad lack of innovation.

Don't get me wrong. I understand that there is a place for some basic level of government spending. Private concerns will never contribute toward a common defense. People do need a helping hand at times when fortune turns the wrong way. Medicine has become unaffordable to many. I have experienced this first hand, but even there, the ACA claimed as many victims as folks it helped.

Keep in mind however, that every single nation that has taken even baby steps toward a freer market (China, the Soviet Union, India, Vietnam) has seen an improved standard of living for the people over several years' time.

The Many Shades of Central Planning

The well-intentioned folks that permit themselves to be herded toward the dangers of near-communism need to understand that they themselves have already suffered from the dangers of central planning. Perhaps the misunderstanding is placing the harm done to the masses by global central banks on the doorstep of capitalism, when the very thought of controlled markets is the very antithesis of efficiencies created by a free market system.

The entire decade long era of slower growth was in fact created at the central banks as a means of preventing the "Great Recession" from becoming a depression. These central banks solved a crisis of liquidity by simply creating more currency. They kept interest rates extremely low, by purchasing debt at inflated prices through the use of this magic currency over an extended period of time. They even bought mortgage paper, and corporate debt depending on where you are. In some places there were even large purchases of funds, or equities. How perverse? How immoral? Efficient? No.

With experimental monetary policies also came fiscal policies that overreached the means of just about every nation on the planet. You see, we are already way past the kind of capitalism that I long for. Now what? Where to from here? I would love to see less government everywhere. My belief is that if the people are permitted to figure it out, they will... and then you help the ones who can not.

It would appear to your author, as he stares out of his office window into the darkness of early morning, that one thing has become clearly evident. Like with any drug, ever increasing abuse of either monetary of fiscal policy results over time in a lesser high that will be experienced over a shorter duration of time. Both drag not only on economic growth, but on personal development. In other words, an entire population has become addicted, and the cry for increased socialism is really the cry of the addict. Is this really just a mass surrender of personal independence? Meant just to make the hurt go away?

Let's check in on one of our better calls of 2019. I gave you Tencent Music (TME) back in January as I got myself long those shares. I am, by the way, still wearing that position as the name heads into it's Q4 earnings results this afternoon. You may recall that this Chinese Music streaming business that IPO'd last December, while not a trade related play, certainly would be a Chinese growth play. Already deeply penetrated, this would eventually become a story about pricing power in my opinion.

Expectations for this evening are for EPS of $0.08 on revenue of $781 million. I am long the shares at an average price of $12.69. The shares went out on Monday at $19.11. That's about 50%. Time to take my leave? I mean most analysts, even the ones who like the name, have price targets below the last sale after this recent run. 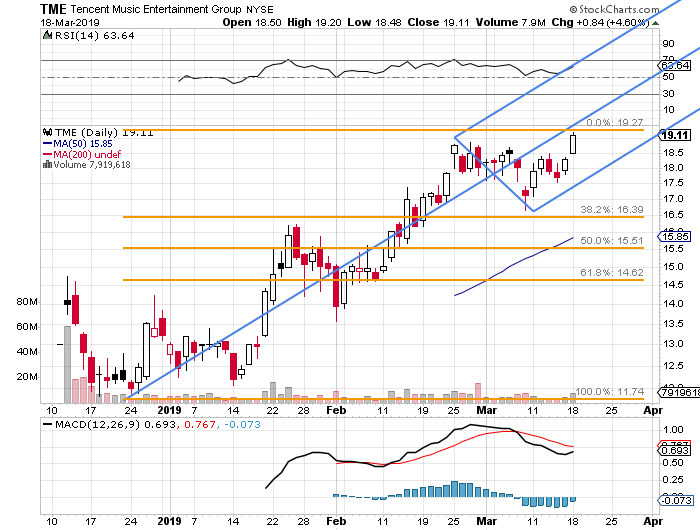 These shares have regained some momentum heading into earnings. As this is not my first rodeo, I understand that the stock is set up for some profit taking should there be a fail at the central trend line of the Pitchfork model. My thought, is that barring disastrous news, the name should find some support at the 38.2% Fibonacci retracement level close to $16.40.

My target price is $21.50. Do I care that I am that far above the rest of Wall Street on this name? I don't know. Do they care that so far, I have been right on this name? I am not selling ahead of the digits. I expect to add on profit taking if severe. My thesis? Back in mid-February, MSCI approved dual class structured shares for inclusion in it's widely followed indices. Remember, these are American Depository Shares, not American Depository Receipts. On top of that, these shares remain cheap enough in terms of price per share to allow for a more discretionary liberty than say a high priced growth stock might.

Get an email alert each time I write an article for Real Money. Click the "+Follow" next to my byline to this article.
TAGS: Earnings | Investing | Markets | Stocks | Technical Analysis | Trading | Digital Entertainment