Farley said Ford has momentum and is in a great cash position, which has allowed it to reward shareholders by reinstating its dividend.

Much of that momentum is coming from electric vehicles. Farley said Ford is oversubscribed on all of its EVs and it has stopped taking new reservations for the F-150 Lightning pickup truck. Ford plans to compete at scale with the likes of Tesla (TSLA) , and the company is eyeing the lucrative commercial truck and van segment.

Farley noted that Ford has the opportunity to reinvent the brand around EVs, but to do so, it will need to double its EV capacity over the next two years. Batteries remain the biggest challenge, Farley said.

Let's check out the charts and indicators. We reviewed the charts of F on November 4 and concluded that "Traders could raise stops to $16. Our new price targets are $32 and then $63 long-term."

Let's see if we are still on track for further gains.

In this daily bar chart of F, below, we can see that prices have stayed in a relatively tight $19-$21 trading range. This kind of consolidation pattern might be called a small rectangle and this should eventually produce an upside breakout. Prices are trading above the rising 50-day moving average line as well as the rising 200-day line.

The daily On-Balance-Volume (OBV) line shows a rising stepwise pattern and confirms the price gains of the past year.

The Moving Average Convergence Divergence (MACD) oscillator is above the zero line but correcting lower from early November. The two moving averages that make up this indicator are narrowing and that can foreshadow a bullish crossover and new buy signal.

In this weekly Japanese candlestick chart of F, below, we see a bullish picture. Prices are in a longer-term uptrend and trade above the bullish 40-week moving average line.

The weekly OBV line is very positive and so is the MACD oscillator. We can see some small upper shadows above $20 but I would discount their potential because they are small.

In this daily Point and Figure chart of F, below, we can see a possible or potential downside price target in the $18 area. 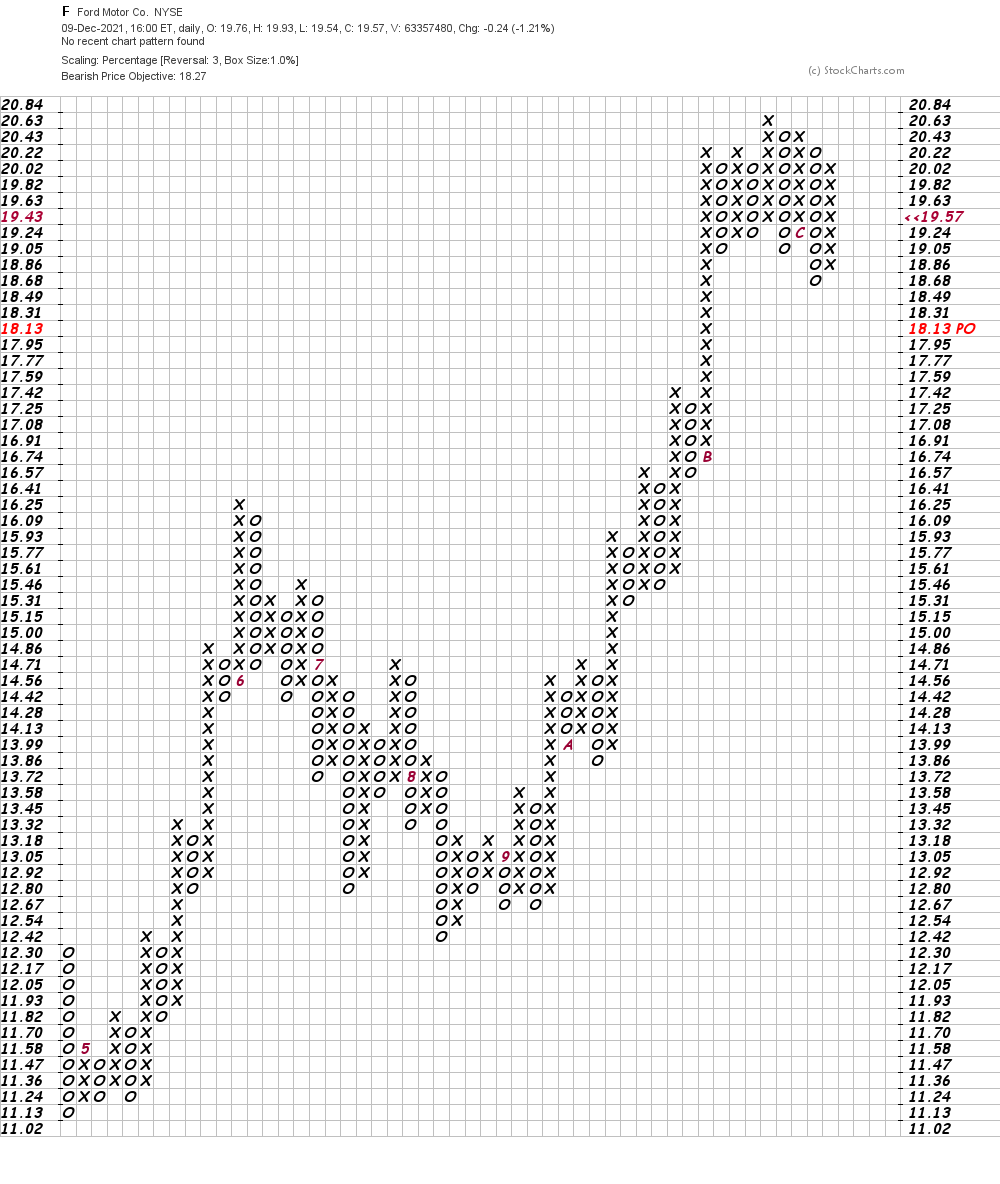 In this first weekly Point and Figure chart of F, below, we used close only prices and a five box reversal filter. Here the software suggests a $60 price target. 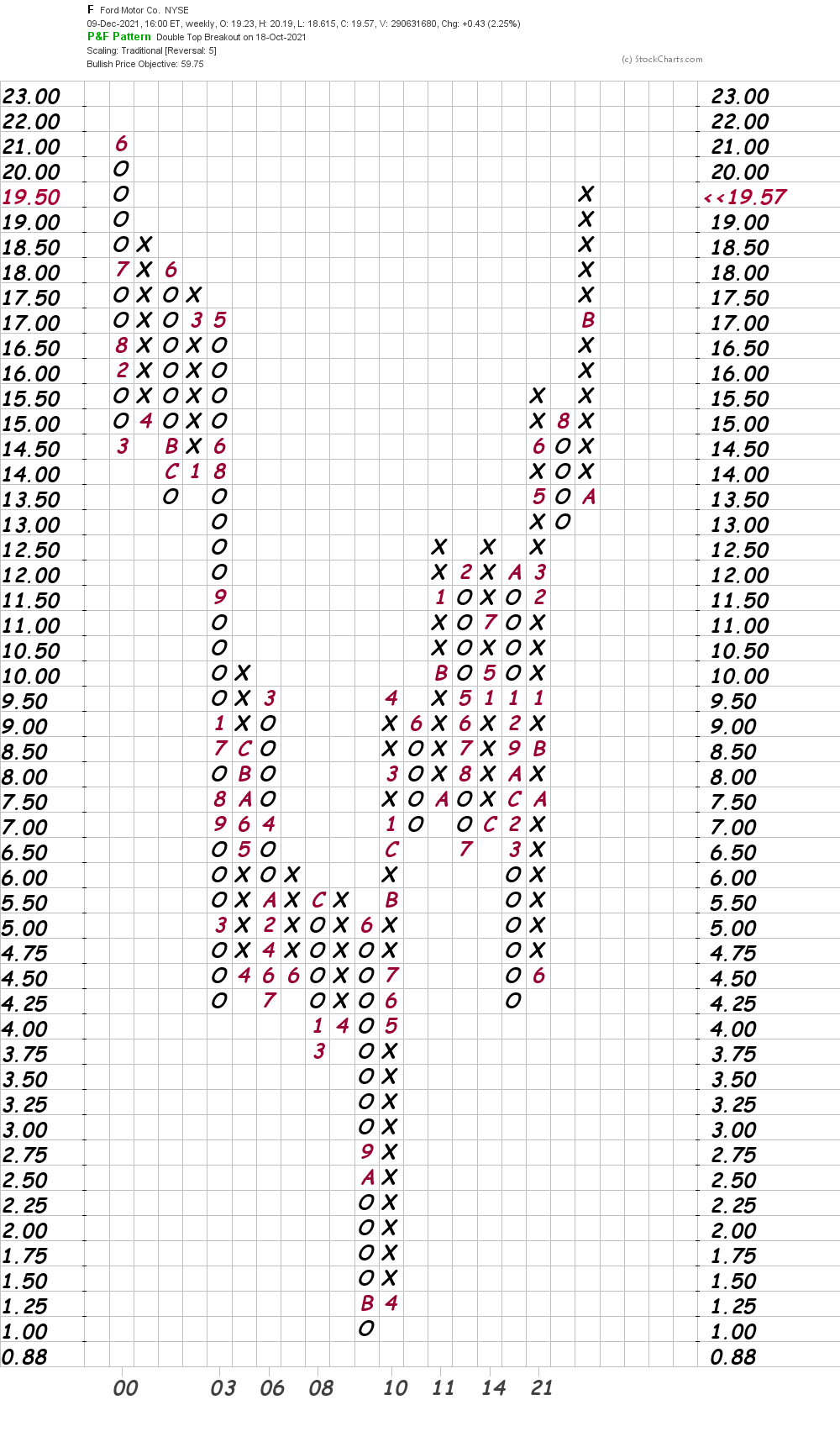 In this second weekly Point and Figure chart of F, below, we used high/low price data and a five box filter. Here we see a $63 target. 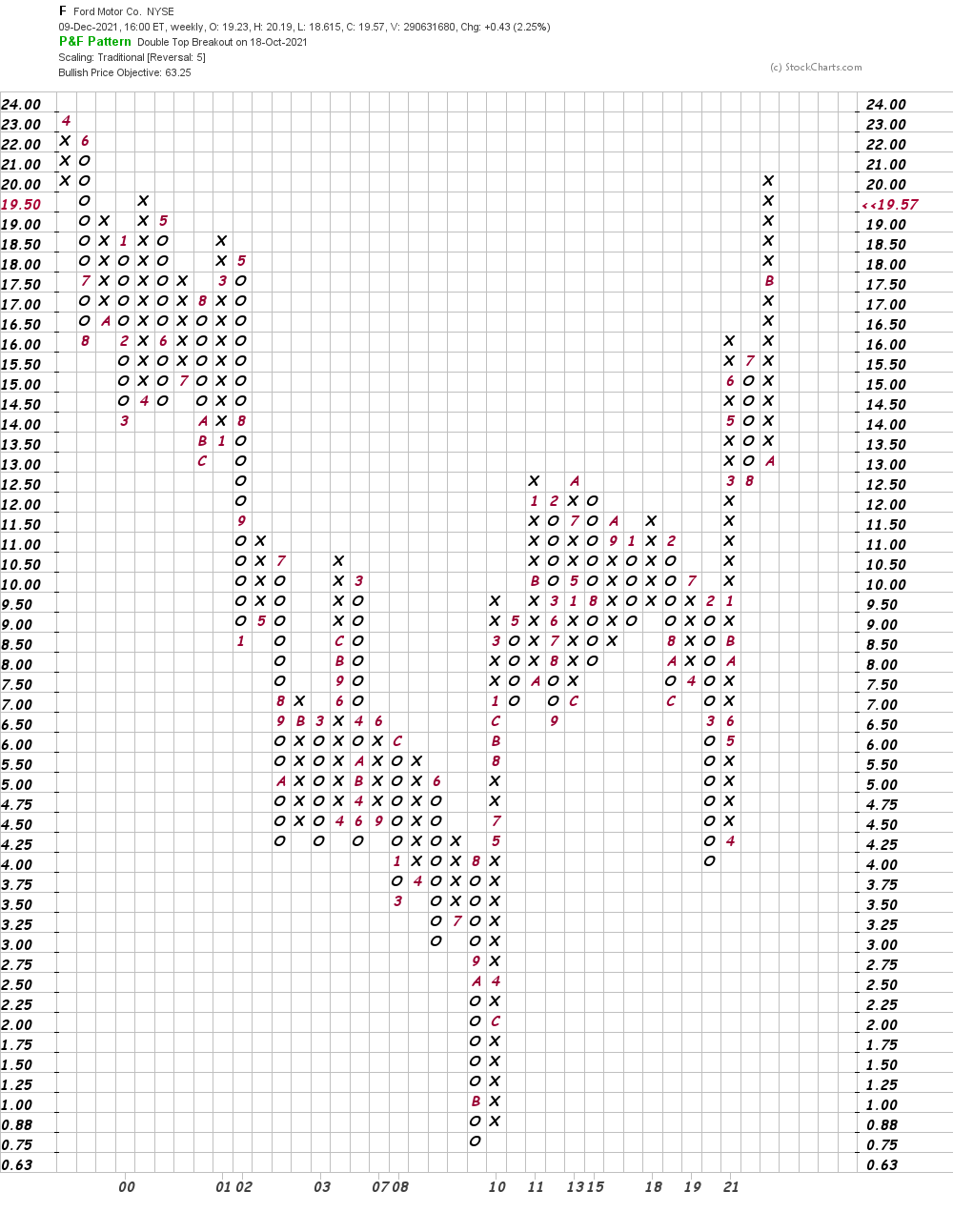 Bottom line strategy: In full disclosure I am not on the waitlist for an EV Mustang but I am thinking about buying an EV in the next 12 months. I did lease a Ford plugin hybrid and only gassed up six times in three years. Charging was "free" as I also lease the solar panels on my roof.

In the meantime the charts of F remain bullish. Continue to hold longs from previous recommendations. Stops could be raised on a close above $21.

Get an email alert each time I write an article for Real Money. Click the "+Follow" next to my byline to this article.
TAGS: Investing | Stocks | Technical Analysis | Trading | Automotive | Mad Money | Executive Interview | Electric Vehicles