We knew he was different almost as soon as he got here. Ford Motor (F) CEO Jim Farley is a car guy. I mean we all are, in a way, but most of us might like our cars, but be defined as something else. Farley is just a car guy. It is what he eats and sleeps. While many investors were tentatively invested in Ford because of the limited downside risk, Farley saw opportunity in a brand that still had a little something, that still meant something to the American consumer, and most of all... because he is a car guy, Farley understood that both legacy and electric automobile manufacturers had forgotten to build cars that regular people like. They like trucks and they like muscular cars. Not just fast cars, but muscular cars. When folks work, they need trucks and vans. The whole industry is behind Tesla (TSLA) in developing electric vehicle and battery technology. The whole industry is behind Ford in interpreting the American consumer.

Early Tuesday (this) morning, the Ford Motor Company announced that it is planning to almost double production of the F-150 Lightning electric pickup truck at the Rouge Electric Vehicle Center in Dearborn to 150,000 units per year to meet high demand for the vehicle, which is the first fully electric version of the F series pick-up, long one of America's most popular vehicles.

Starting this Thursday, the first group of nearly 200,000 reservation holders will be contacted and invited to convert their reservation into actual orders. Ford is implementing a wave by wave process, due to unprecedented demand for the vehicle, in contacting potential customers. Those not contacted will have an opportunity to order a future model year pickup. What is perhaps most interesting is that Ford is on the verge of winning market share. 75% of these reservations are not from Ford loyalists, but from individuals new to the Ford brand. These facilities all together represent a combined investment of $11.4B and job creation of close to 11,000 new positions.

The Ford Motor Company under the leadership of Jim Fraley is committed to investing more than $30B in electric vehicles through the year 2025. The goal for now is to emerge as a clear cut number two North American electric vehicle manufacturer, and then ultimately take a run at the top spot. Within two years, Ford expects to have the capacity to produce 600,000 battery electric vehicles per annum.

Let's not forget that Ford is building the largest auto production facility in its history in Tennessee, where future generations of F-series electric pickups will be built. With partner SK Innovation of South Korea, Ford is building three new BlueOval SK battery production plants, one in Tennessee, and two in Kentucky. The plants are expected to manufacture advanced lithium-ion batteries for both the Ford and Lincoln brands.

In case you forgot, or missed the story... back in December, Ford also announced the need to triple production of the electric Mustang Mach-E at its plant in Mexico due to overwhelming demand and expects to reach the ability to produce 200,000 of these vehicles by 2023. In addition, Ford's E-Transit all-electric utility van, primarily a commercially used vehicle, will go on sale early this year (2022).

Ford Motor is expected to report the firm's fourth quarter digits the week after next. Wall Street is looking for EPS of about $0.40 (+17% y/y) on revenue of almost $36B (+8% y/y). Wall Street is also looking for full year sales to have grown 9.5%, and for sales of this now just started year to rise nearly 14%. We all know that Ford is managing a huge debt load. That said, operating cash flow remains robust, both unlevered and levered free cash flow have gone positive. The current ratio stands around 1.2, and tangible book value per share is now the highest it has been in years. 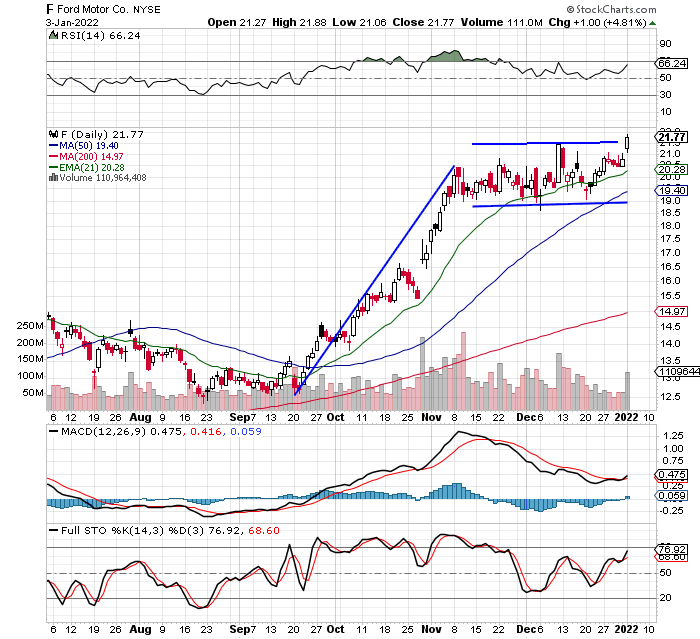 Readers will see Ford attempting a breakout past a pivot created by a flat basing period of consolidation that came after a sharp rise in price. All three of my indicators... Relative Strength, Full Stochastic Oscillator, and the daily MACD appear to be headed for a technically overbought condition, and could get there this week. I would then look for a more gradual appreciation in price that the name experienced this past autumn.

Get an email alert each time I write an article for Real Money. Click the "+Follow" next to my byline to this article.
TAGS: Investing | Stocks | Technical Analysis | Trading | Automotive | Electric Vehicles