There's a shifting trend in consumerism. This younger generation, perhaps due to what they have witnessed happen to their families growing up, or perhaps that while some of my generation and generations older than mine often cast verbal stones at "basement dwellers", the fact is that opportunity and upward mobility are tougher to come by for those 30 to 35 years my junior than it was for us. Of course, we had to work hard, and we had to work our way up. I did not go straight to college, and I had to do plenty of night school to finish, but I always knew that if I ran for the coffees and mopped up the floor that someone would notice me. Not sure how many believe that their effort at the low end will gain attention from someone at a higher level able to do something about it these days.

I honestly believe that this is one reason why younger consumers have trended away from using revolving credit as a means to support a certain standard of living, and have leaned toward the "Buy Now, Pay Later" model as a means toward not paying any interest if possible, and stretching that up front payment for expensive goods from one lump some to a few monthly payments. I see this divergence in behavior just in the way I pay for goods and the way my children, now full-time working adults, go about it.

After seeing the "BNPL" model as nothing more really than an updated model of what Sears and many other department stores were doing in my youth with "layaway" plans. The difference though was that consumers in those times could pay a little at a time, as the item was put away for them. They received said item once it had been paid for. There was no actual lending involved. With BNPL, the principal is paid over months, and there is no interest, but the item changes hands up front. There is a loan here.

The kind of scary thing, I think, was reported on Thursday by Reuters. Hang on while I try to properly credit this research. Reuters cited a study conducted by Qualtrics and published by Credit Karma. Hope I got that right. Well, it seems in a small study (1,044 adult consumers), 44% of those surveyed had used BNPL services. 38% of that 44% had fallen behind in making these payments despite the fact that payments of this type are broken down into three or four slices. It gets tougher by age group. More than half of those missing payments were either Gen Z or Millennials. 22% were Gen X, while 10% were Boomers. 72% of those missing a payment said it negatively impacted their credit score.

On Thursday night, Affirm released their fiscal fourth quarter financial results. The firm posted a GAAP loss of $0.48 per share, which was a fairly significant miss on revenue of $261.78 million. The revenue number not only beat Wall Street just as significantly, but was also good enough for annual growth of 70.7%. Q4 Gross Merchandise Volume accelerated 106%. That rises to 178% excluding Peloton (PTON) , which has been a major client. Active merchants are up 412%, while active consumers have doubled. Transactions per active customer increased 8% to 2.3.

Taking a look at the balance sheet, the firm has a sizable cash position that has grown considerably over the past year. Goodwill has grown considerably, but so has the firm's reputation, so nothing negative to say about that. Total assets dwarf total liabilities less equity despite growth in notes issued by securitization trusts. There is some cash burn here as the frim ran a net loss of $128.2 million for the quarter, but we'll have to see how this agreement to work with Amazon plays out. There is rapid sales growth here, and an undeniable trend in place. That said, I sincerely expect that given a larger sample, the percentage of those making purchases with the intent of paying them off over a few months and doing so successfully is probably larger than what we see in the study mentioned above. 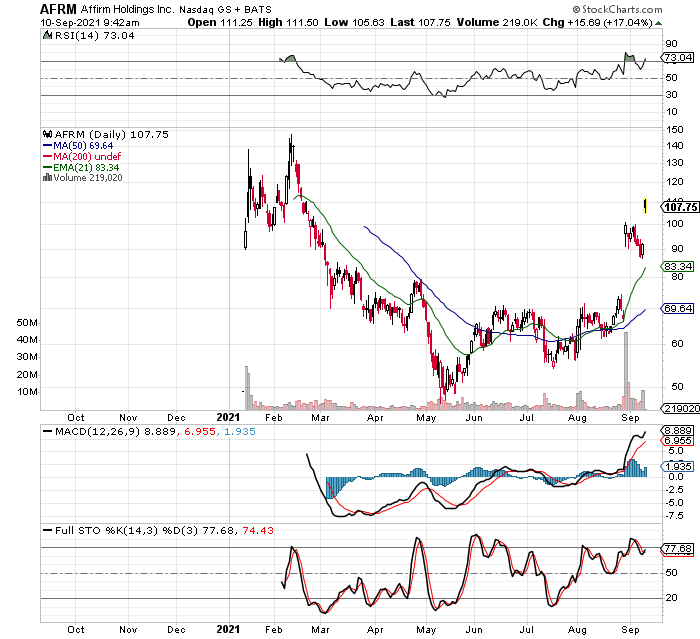 For technical reasons, and not because I hate the stock.... I will be putting on a bear put spread this morning...

(PayPal and Amazon are holdings in Jim Cramer's Action Alerts PLUS member club. Want to be alerted before Jim Cramer buys or sells these stocks? Learn more now.)

Get an email alert each time I write an article for Real Money. Click the "+Follow" next to my byline to this article.
TAGS: Investing | Stocks | Trading | Consumer Services | Technology