Marvell Technology (MRVL) has gone from red to green and back to red Friday morning, and that about sums up the analysts views as well. Some analysts are lowering price targets while other are reiterating buys. Marvell management guided their expectations for 5G and we saw some analysts note those projections as disappointing while others are implying management is being too conservative. In other words, they aren't believing them, but the amount of disbelief is hard to believe. Did you follow that? It might be easier to see with numbers.

The company offered a 5G base case expectation of $600 million per year, which is below the initial Wall Street expectations of $1 billion. Still, we have an analyst from Barclays saying they still see this as a $1 billion opportunity. Then there is Oppenheimer suggesting a base of $850 million with a bull case of $1.6 billion.

Look, saying $600 million and hitting $850 million is definitely playing conservative. Hitting $1 billion feels more like not understanding your opportunity. But that $1.6 billion number is more like saying, "but I could win the lottery." And if that is the case, the $1.6 billion, then even the $30 price target Oppenheimer has on Marvel makes little sense since it would propel Marvell's sales 25% to 30% above current projections. I guess I could make that argument if Oppenheimer was increasing its price target today, but it is merely reiterating the number. For now, I'll live in the camp Marvell is taking a conservative approach with the earlier than expected launch of its 5G products, but I'd be more likely to model $750 million to $800 million as I am optimistic on 5G.

Marvell discussing disappointing enterprise networking business shouldn't be a surprise based on Cisco's (CSCO) earlier report. Remember that for next quarter. If Cisco talks any improvement in enterprise networking, then investors will want to consider it a read through. Same can be said on storage, although Marvell reiterated the growing stability in SSD and HDD storage. Again, another sentiment echoed earlier in earnings season. Again, remember this for next quarter.

Huawei continues to weigh on many tech companies with Marvell being no exception. I would anticipate a nice pop in shares if that picture ever clears. The same can be expected if the U.S.-China Trade Wars diminish. Until then, Marvell will be all about the 5G story. Getting an early start with sales to Samsung (SSNLF) is a huge boost. Without it, I believe shares would be trading in the $20 to $21 range today. Unfortunately, I don't believe it will be enough to offset continued Chinese softness in Q4. 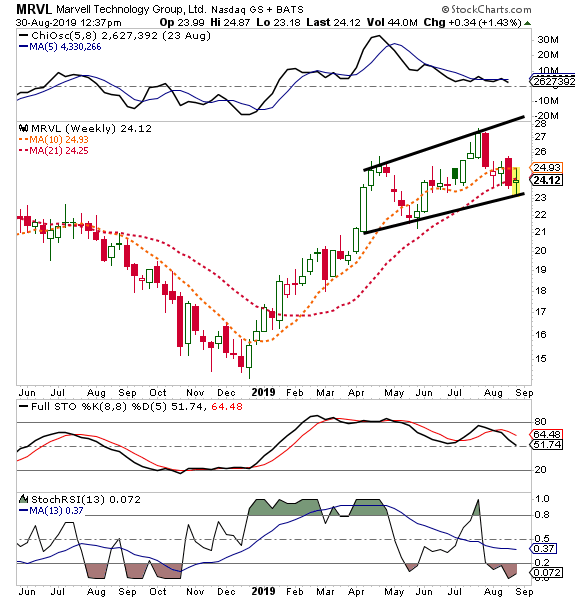 As long as the stock can hold $23 on a closing basis this week and next week, it will stay inside a very important trading channel. Bulls will need to keep the buying going though as the support level is rising, so it is possible Marvell could lose support by simply trading sideways. Secondary indicators are rolling over in bearish fashion and we're trading under both the 10-week and 21-week simple moving averages. I'd advocate caution here and be more comfortable entering the stock in the $19 - $21 area.

(Marvell Technologies and Cisco are holdings in Jim Cramer's Action Alerts PLUS member club. Want to be alerted before Jim Cramer buys or sells MRVL or CSCO? Learn more now.)

Get an email alert each time I write an article for Real Money. Click the "+Follow" next to my byline to this article.
TAGS: Earnings | Investing | Markets | Stocks | Technical Analysis | Trading | Semiconductors & Semiconductor Equipment | Technology | China | Stock of the Day