I believe in the metaverse concept. Every day, we spend more and more time in the digital world. I don't care if it is Instagram, Snapchat (SNAP) , Twitter (TWTR) , Facebook (FB) , or gaming. Heck, even television with streaming is almost purely digital at this point. Plenty of folks get immersed in streaming shows or movies while they are on the go. Whether you like it or not, think it is stupid or not, it's coming. I'm a little scared Facebook has recognized it and is moving quickly. Coinbase (COIN) moving fast to adopt NFT (non-fungible token) trading does make sense as it fits their profile. And then as I thought more on it, Facebook drew many folks into the digital world who never turned on a computer before. Perhaps I'm exaggerating, but Facebook definitely drew tens of millions, if not hundreds of millions, of paper online that may have never gotten there.

The concern for me here is if they establish the metaverse as a first mover, we could simply end up with an augmented reality or virtual reality version of Facebook. We should see other disruptors. Polygon and Sandbox have been deep in development, so I don't think it will be a cake walk for Facebook, and there are many directions the metaverse will take, but from a social aspect if Facebook is truly first and we get copycats, I'm not sure how enjoyable that segment of the metaverse will be. 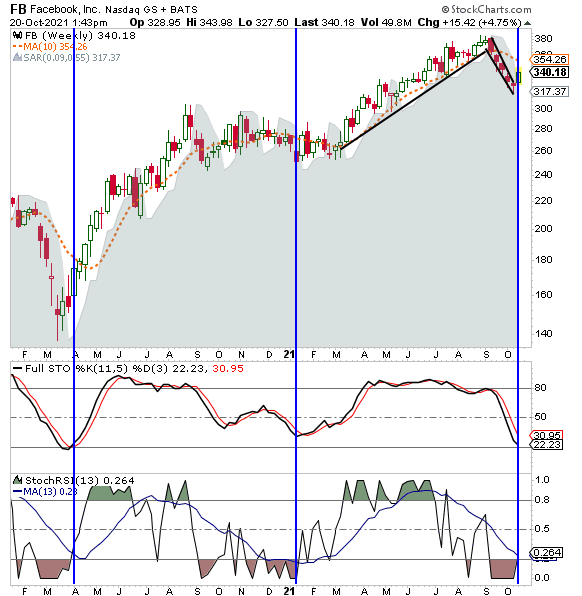 Personal views aside, the chart setup here is one that appears enticing. After a multi-week pullback, we have a solid push higher this week. This bull flag breakout ties well to previous technical breakouts of the past two years. I'm focused here on the bullish crossover in the StochRSI along with a bullish flip in the parabolic stop-and-reverse (PSAR). We are lacking the bullish crossover in the Full Stochastics this time around although it is close to crossing. The 10-week simple moving average (SMA) is sitting $15 higher, however, the previous breakouts have managed to also push through this level.

Earnings are coming up on October 25th, so it is hard to make a move prior to earnings, but I believe we'll see Facebook heading back to $380. The metaverse move is the right move. If the stock sells off post-earnings, I think it will be an opportunity. A breakout above $380 should light a fire into the $400s. I'm not going to make a move in front of earnings, but if the company executes well on this, it is going to be huge for them.

Get an email alert each time I write an article for Real Money. Click the "+Follow" next to my byline to this article.
TAGS: Earnings | Investing | Markets | Stocks | Technical Analysis | Trading | Media