When bad is better...better than expected. Deere & Co. (DE) reported the firm's financial performance for its fiscal third quarter on Friday morning. Good? No, not in terms of sales growth. Maybe though in terms of execution, and in managing expenses in order to ratchet margins a bit higher though. The backdrop had been tough going in. Crop prices had been low. Not much was expected from the housing sector, and trade between the U.S. and China has created some tough sledding. That said, the firm, whose shares now trade more than 80% higher than they had at the March 2020 lows, has found a way. Although that way has included payroll reduction.

For their third quarter, Deere reported EPS of $2.57. Though this was year over year earnings growth of -5%, this was also an extremely sizable beat. The street had been down around $1.25 on this number. Revenue contracted some 11.1% to land at $8.93 billion, but as with profitability, this easily beat expectations of less than $7 billion. Operating margin for the quarter ran at 14.6%, but that margin is not evenly spread across the company's business units.

Equipment Operations posted net sales of $7.859 billion, which was -12% year over year. However, that unit's operating profit grew 16% to $1.147 billion. It goes on. Agriculture and Turf saw a 5% decline in sales, but a 54% increase in operating profit as that specific unit ran its operating margin from 10.3% to 16.6%. Construction and Forestry was a little tougher on the eyes. Net sales decreased by 28%, but operating profit crashed 46%. Operating margin came in a bit, from 12.5% to 9.4%. Financial services, by far the firm's smallest business line, was actually the only business that increased its contribution to the whole in terms of revenue. That number was just $183 million, a 4.6% rise.

Interestingly, the firm found ways to reduce the cost of sales from $6.870 billion one year ago to $5.835 billion, a 15.1% improvement. Cuts were made to research and development, administrative or general expenses and also to interest expenses. Long-term debt now runs close to $4 billion higher over nine months, taking total liabilities a little higher. That said, assets are growing faster than liabilities as the cash position has grown faster than that long-term debt.

The reason you saw a nice opening pop in the share price likely has more to do with the firms' outlook than this quarterly outperformance of consensus view. With only one quarter to go, Deere now expects net income for the full year to land close to $2.3 billion, up from prior guidance of $1.8 billion. This is to provide cash flow now expected to print for the full year at $2.8 billion, up from the $2.3 billion that the firm had predicted three months back.

Understand that this guidance is a huge upgrade, but still will represent year over year declines in sales across key units as the firm continues to navigate not just the pandemic, but a very uncertain global trade condition. The dollar is cheaper, and that should be helpful, but just who will trade with who? A nice infrastructure package coming out of the election regardless of electoral outcome sure would be nice for Deere. 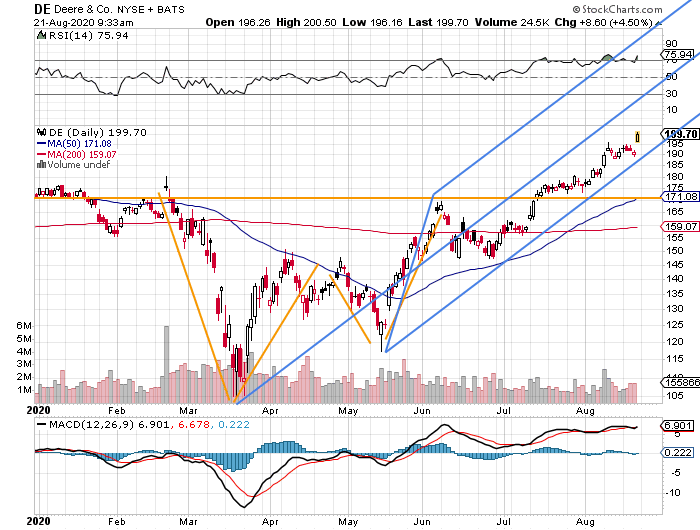 What are we looking at? Take that dip last spring for instance. Cup with handle pattern? Double bottom? It's surely one of them. I place that pivot at the $170 level. Based upon a breakout of that pivot, these shares can still run as high as $204. That said, there is the support of the lower chamber of the Pitchfork that began at the chart's low point in March. That chamber has housed this stock's entire range since mid-June. I think investors (I am not in DE, so this is not my money I am talking about, it's yours.) can risk a run at the central trendline of the Pitchfork as long as they remain cognizant of the lower trend line should that line come under pressure. In fact, that line might be where I venture a purchase, I would not chase the name today.

Get an email alert each time I write an article for Real Money. Click the "+Follow" next to my byline to this article.
TAGS: Earnings | Economy | Investing | Stocks | Technical Analysis | Trading | Agriculture