A Long Time Ago

Oh, somewhere in this favored land the sun is shining bright;

the band is playing somewhere, and somewhere hearts are light,

but there is no joy in Mudville - mighty Casey has struck out.

Due to those higher expenses, Operating Margin decreased 10 basis points to 11%. Inventories actually increased... in this environment. There's still more.

Across the retail landscape, most would covet same store sales growth of 4.6%. That's much higher than we have seen across the space this season. Too bad, the street was looking for something up around growth of 5.2%. Then there's China. As a retailer, Foot Locker is really at the mercy of their suppliers. The firm joined with competitors and suppliers alike in sending a letter to the president's administration last week. They requested that shoes be removed from any expansion in the 25% tariff on Chinese exports to the U.S. The letter claims that such a tariff would add $7 billion in additional costs that would have to passed on to consumers. My colleague here at TheStreet, Martin Baccardax covers this story well in his piece this morning.

Should You Buy This Dip?

That's what you want to know. I can't tell you that. I can tell you that I do not expect to add any China related risk today ahead of this three day weekend. That said, the quarter was not a disaster. Today's reaction is not only about China, or the missed expectations... it's also about lowered guidance for profitability. That bothers me. The firm now expects to see high single digit earnings growth for the full year as opposed to the double digit growth that they guided toward in response to the successful Q4 earnings release in February. 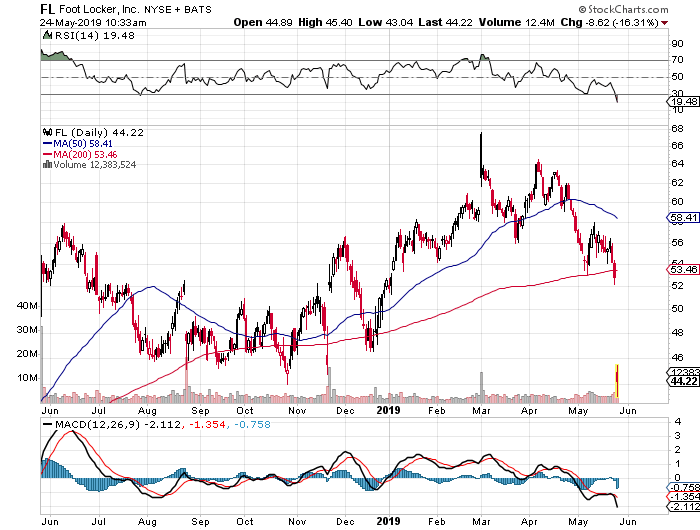 The fact is for those willing to look at the bright side, that performance was not awful. Expectations were way too high for this environment.

If an investor were willing to take an upside stance with the stock trading nearly 17% below it's 200 day SMA, or an incredible 25% below the 50 day, then this investor would probably be better served by getting long some August calls instead of laying out hard earned dough for an equity stake. Right now, August $47.50's will only run the investor a rough $1.75. A trader on a budget could then sell the same number of August $55's in order to recoup 30 or 35 cents of that to create a bull call spread.

Get an email alert each time I write an article for Real Money. Click the "+Follow" next to my byline to this article.
TAGS: Earnings | Investing | Markets | Options | Stocks | Technical Analysis | Trading | Retail | China | Stock of the Day