Out Of The Woods?

That's the question this morning. Not for the broader equity markets. I am already pretty darned sure that the markets are not out of the woods despite this morning's early support. I speak of Foot Locker (FL) . By now, if you are working the markets this morning, you already know that Foot Locker turned the table on recent weakness across the retail space on Tuesday night. The firm posted third quarter results that looked quite decent. Yet decent earnings had not done much for other retailers, such as Walmart (WMT) , Home Depot (HD) , Kohl's (KSS) , and Target (TGT) .

How Did they Do?

Good quarter. Beat expectations for both EPS and revenue. Crushed expectations for same store sales. Gross margins also improved. Color me impressed. The real take away in my opinion came during the call. When CFO Lauren Peters was speaking prior to the analysts' questioning, she mentioned that full year guidance for cap-ex would now likely come in at $210 million, down from the previously guided to $230 million. In addition, Peters also mentioned her expectation that gross margins would continue to expand... a lot of retailers aren't saying things like that right now. In addition, comp sales are also expected to grow faster in the fourth quarter. Peters used a range covering low to mid single digit growth where previously there was no use of the words "to mid". Nice. 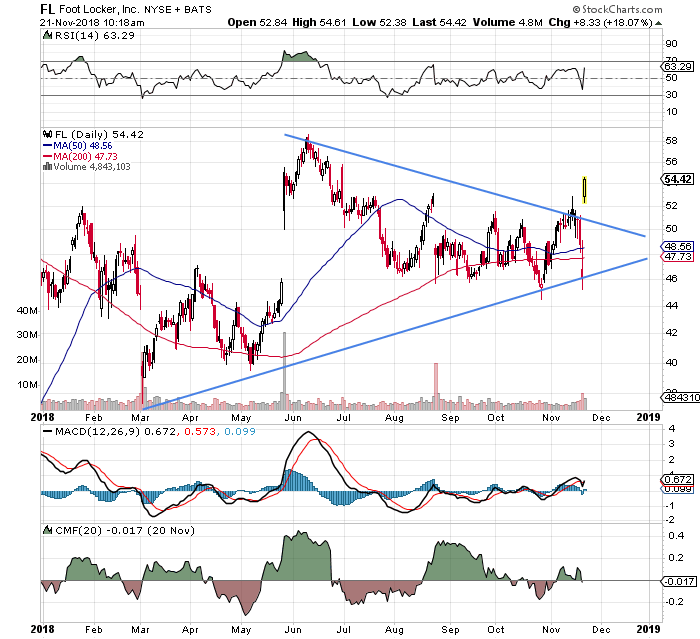 What traders are seeing this morning is the breakout of a pennant formation coming on the heels of a period of consolidation. Half of you don't care about all of this technical jargon. You want to know if it's already too late to get in.

Honestly, I don't believe it is too late. That said, I am not gong to tell you to do something that I would not do myself. Do I want to play a name going into Black Friday/Cyber Monday that is already riding high? Maybe not. My gut instinct is that maybe, no promises, a trader might buy this name a few dollars cheaper next week.

What A Trader That Missed This Move Might Do

Foot Locker's 200 day simple moving average stands close enough to $47.75, the 50 day SMA at $48.50. Is $48 the level that this name will be drawn to should retail in general not impress all that much going forward?

Instead of buying 100 shares of FL at or close to the last sale of $54.42, a more cautious trader might sell one January $48 put (implied value: $1.35). There would be two outcomes possible. If the name gets slapped around into January, the trader will end up long 100 shares at a net basis of $46.65. If FL soars with the eagles, the trader pockets $135 clams. Both outcomes seem palatable to this guy.