Panic At The Disco

As Federal Reserve officials have made clear this week, there has been a clear shift in short-term thinking on where the Fed Funds Rate should be. Perhaps a bit late quite honestly. As Fed Chair Jerome Powell, and then several others have made the rounds, there has been an overt shift in thinking on where the impact of multiple front trade wars could lead the nation from a macro-economic perspective. Or was this simply reflex. Reflex to weakness in financial markets? Don't get me wrong. You still know me. I am still a hard currency, fiscal conservative at heart, who believes credit over time should be priced appropriately. One must also adapt to the environment provided, and that is where the Fed went wrong. They led from the front, and nations starving for yield thought that 3%, and then even just a little more than 2% looked pretty good for 10 years as their own central banks went down various rabbit holes. How ironic that global central bankers, in a effort to promote risk taking and inflate away untenable national fiscal policies through the implementation of zero to negative interest rate monetary policy, have only provoked the public to hide their savings, and reduce risky behavior, producing in the end a dis-inflationary environment that at times borders on actual deflation. What fools, these mortals be.

In Chicago, futures markets now price in a 26% probability for a rate cut at the June 19th meeting. That's 12 days, gang. That same market prices in an 83% chance of two cuts, as well as a 51% chance of three, not because the economy needs three rate cuts, though the unsettled condition that revolves around international trade does pose negative, possibly severely negative implication. The need for lower short term interest rates is simply the product of an innate inability to push out the long end of the curve, and then keep it there. This is real simple stuff, gang. 90 day paper probably should not pay better than 10 year paper, or 30 basis points more than 7 year notes for that matter. Gee whiz... for those who try not to soak this stuff in, take a few seconds and force yourself to look at the curve. If the yields on 10 year notes and 30 year bonds can not be pushed out, and the San Francisco Fed has publicly stated that the inversion of the 90 day/10 year spread is their most reliable indicator of coming economic contraction, then the FOMC simply must act to thwart that recession. It is incumbent on them to heed their own warnings. Every one of these folks at the central bank understands this, and this is not rocket science. Not in the least. They want you to believe it is. June 19th. Game on.

Good news. The Fed goes into their pre-policy meeting media blackout period next week. With the parade of jugglers,and plate spinners grinding to a temporary halt, the Friday focus will land squarely on Jobs Day, and on U.S./Mexico trade talks in D.C. Then over the weekend, global central bankers will meet in Japan to discuss the trade war with China, but we'll leave that for Sunday night futures markets to sort out.

On Wednesday, The ADP Employment Report hit the tape at 27K versus expectations for about 185K. Key to my thinking here is that (this is just my opinion) when there is a discrepancy between the ADP number and the Non-Farm Payrolls number complied by the Bureau of Labor Statistics (BLS) that the ADP number is probably closer to the truth, as ADP relies upon hard data (actual payrolls), and the BLS relies upon survey as a method.

Facts are facts and as far as I am concerned, though, the two series that we have for monthly job creation often vary wildly, they do tend to draw toward each other when compared in terms of moving monthly averages. Remember, that the BLS only put 33K to the tape for February versus 197K that month for the ADP report.

For 2019, the BLS Non-Farm Payroll series has averaged 199K over four months. The ADP series came into this week, averaging 230K for 2019. This paltry 27K brought that average down to 189K over five months. Much more in line with the BLS average. Oddly enough, you will see below that expectations for today's BLS print are for roughly 180K Non-Farm Payrolls. That number, if spot on, would bring the BLS average to 195K. Gravitational pull? No, sometimes surveys can be less accurate than data, but upon revision, usually both series come close to getting it right, job creation just needs to be looked at more broadly than it is.

"We have explained that there are 6,000 men and that they will be deployed there," Mexico's Foreign Minister Marcello Ebrard seemed to be trying to convince reporters. The Trump administration needs more. The U.S. wants Mexico to declare itself a "safe third country" which means that those entering Mexico from that nation's southern border would then be ineligible to claim asylum at the U.S. border. The U.S. also demands that more be done to slow the smuggling of illegal drugs into the U.S., which Mexico seems to at least publicly be willing to do.

As of now, the schedule of tariffs that would begin at 5% this Monday has not changed. Yes, several key administration officials have cited progress, but the president is out of the country, and the vice president is travelling as well. Not that in 2019 being anywhere prevents anyone at that level from doing anything somewhere else if need be, but logistically, this does offer a stalling tactic if one is desired. No deal today, and it is not the central bankers meeting in Japan that will impact equity index futures markets on Sunday evening.

That all said, the S&P 500 now stands considerably higher than it did when the president's Mexican tweet-storm hit the marketplace on May 30th after three days of intense rallying. Key to note here is that now that the index has left the 200 day SMA in the dust, can it take, or will there be resistance to the 50 day SMA? The Thursday high came within 17 points of making contact. 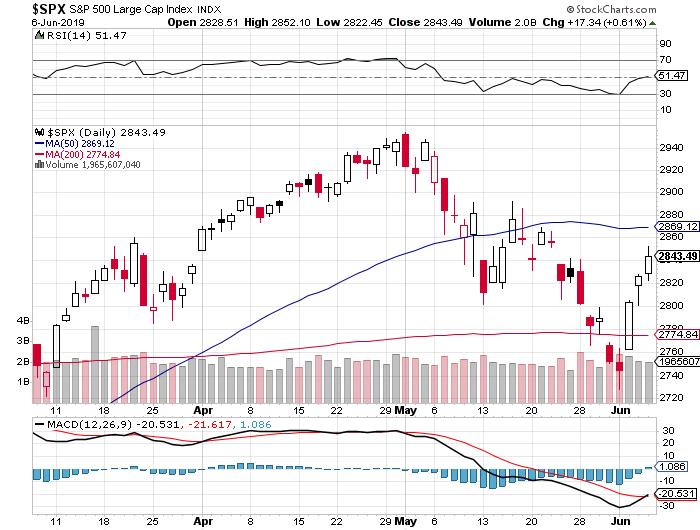 Interestingly enough, for the S&P 500, Relative Strength returned to a slightly above neutral stance for the first time since early May, on the daily chart... the 12 day EMA (Exponential Moving Average) crossed over the 26 day EMA. Though both remain below the 9 day EMA, for those of you who gloss over when they read stuff like this, and need me to simplify, this can be a bullish signal.

However, the whole idea of a confirmation day that I have been discussing with you all week, just got a little messy. Yes, the S&P 500 and Nasdaq Composite both scored gains on the day of between half of, and three quarters one percent, trading volume in NYSE listed shares once again declined from the prior day. This has now happened every day this week. As for Nasdaq-listed trading volume, there was a slight uptick. Confirming? Hard to say, given that declining issues outnumbered advancing issues up at Times Square. I would say that the big money is at least partially still watching. For myself, I proceed with more than my usual caution. If the trend has truly turned we'll all be okay, and even if you have been slow to jump back in, you have not been slower than the large institutions. Not yet anyway.

Been A Long Time Since I Rock And Rolled

Interesting news came on Thursday from Uber (UBER) . Apparently, the firm is set to offer on-demand transportation from downtown Manhattan to JFK airport in New York City by helicopter. This service will only be available to the firm's Platinum and Diamond members starting on July 9th.

The average fee is set to land somewhere between $200 and $225 per individual, and this price will include car service to and from the helipad on each end. My question is this. Will you cut me a discount if you don't actually have to land on the other end for me?

- Beyond Meat (BYND) , and Zoom Video (ZM) have stolen the show overnight on stronger than expected earnings reports. Those horses may have left the barn. Opportunity may present in a different name. DocuSign (DOCU) is being severely punished overnight in response to earnings and guidance that though disappointing, just don't look like the end of the world to me. Maybe too much optimism was priced in, guidance was in-line, revenue looks good to me. Free Cash Flow has grown rapidly. The shares are trading 18% lower from the closing price of $54.74 at less than $45. I'll see where it opens. 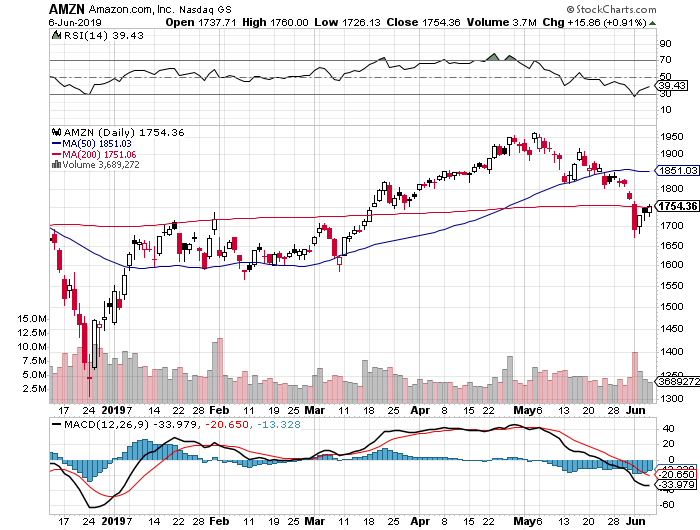 Important note here. Amazon retook the 200 day SMA on Thursday. If the name finds support there, that would re-establish a pattern that I had shown you in May. 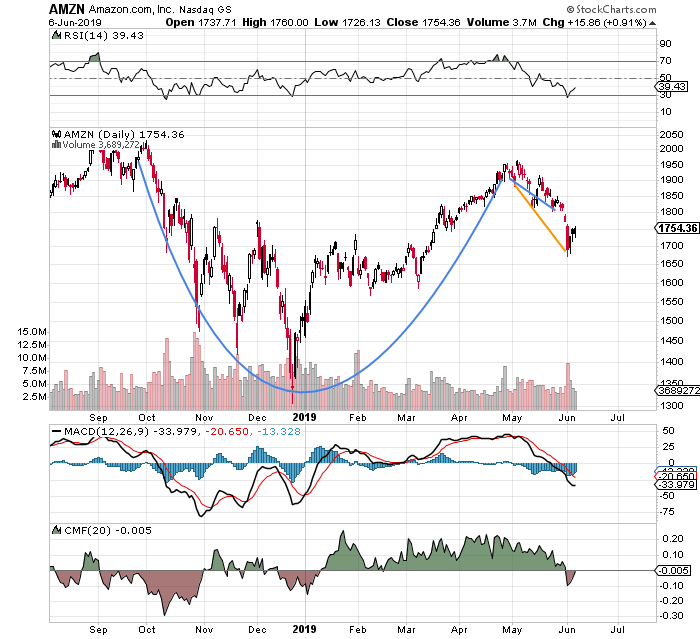 At that time, I had put confidence in the blue cup with handle pattern. Perhaps prematurely. The orange handle replaces the blue handle. This brings the depth of the handle to 15%, while leaving the pivot (or sometimes, the catapult) in the same spot it already was, up in the $1960's. If all this works, target would have to be re-established way higher. So high, I'll mention it another time. For now, AMZN simply needs to find support at $1751.

Note: There are no significant corporate earnings scheduled for release today.

Get an email alert each time I write an article for Real Money. Click the "+Follow" next to my byline to this article.
TAGS: Federal Reserve | Interest Rates | Investing | Jobs | Markets | Options | Stocks | Technical Analysis | Trading | Mexico