Broadcom (AVGO) CEO Hock Tan is the kind of corporate leader that you end up rooting for, if anything because he's one aggressive fire-eating type of hard-charger. We all aspire to be the hard-charger in our circles. We all admire those who truly are. Let's explore.

After the closing bell had peeled it's last on Thursday, Broadcom reported fiscal third quarter financial results. The firm put to the tape adjusted EPS of $5.16 to the tape, beating expectations, while posting revenue generation of $5.52 billion, good enough for 9.1% year over year growth, just a smidge below consensus. Now, to put performance in perspective, in June, after the White House had restricted Huawei in regards to doing business with U.S. companies, Broadcom reduced guidance for full year revenue to $22.5 billion, down from $24.5 billion. The firm cited the uncertain global trade condition as well as slower demand for semiconductors at the time.

On that note, very importantly after last night's results, Tan said "Looking at the Semiconductor Solutions segment, we believe demand has bottomed out, but will continue to remain at these levels due to the current uncertain environment." What I heard, and perhaps it's just me, was... We found a level we can live at for now, until a trade deal is agreed to between the U.S. and China that unleashes potential for both Huawei and Apple (AAPL) . The firm then reiterated the reduced guidance for June. While it is necessary to be conservative, this item disappointed investors.

As one might expect, that Semiconductor Solutions segment, really the bread and butter of the firm, turned in revenue of $4.35 billion (78.8% of the total), which was -5% y/y. Other segments such as Infrastructure Software (that includes storage switching), and Licensing (tiny) saw six figure improvement in percentage terms.

Operating Cash Flow hit the tape at $2.419 billion, producing Free Cash Flow of $2.307 billion, an 8% increase over the same quarter last year, though understandably lower sequentially. Gross margin printed at 55%, comparing to 56% for Q2, but 51.7% for Q3 2018, so mixed results there. GAAP operating profit for the quarter landed at 16%, yet in the guidance, the firm sees 14% for the full-year. Again, this may be conservative, but will give investors reason to pause.

Going to the balance sheet, cash and equivalents grew. Due to the aggressive nature of the beats, long-term debt grew considerably faster. This leaves the firm more heavily dependent upon Goodwill to balance the books. Honestly, I hate to see that, and it does slow me down as an investor.

You all know that Broadcom acquired CA, the old Computer Associates last year. You all know that earlier in the summer, Broadcom announced a $10.7 billion deal to acquire Symantec (SYMC) , the parent of the Norton and Lifelock brands. The firms have expressed an interest to close that deal this year. If you are in this name, then you also know that the firm has aggressively returned capital to shareholders.

On that point, CFO Tom Kraus indicates that while the firm will still spend 50% of annualized Free Cash Flow on dividends, that the firm will "transition focus to deleveraging the balance sheet." In other words, maybe not focus so much on repurchasing shares. The firm bought 3.5 million shares during the quarter reported. This certainly weighs on investor sentiment Friday morning.

What might change that noble plan? Symantec has been approached by two private equity firms (Permia and Advent International) in regards to buying the company for more than $16 billion. This story could and will get more interesting. 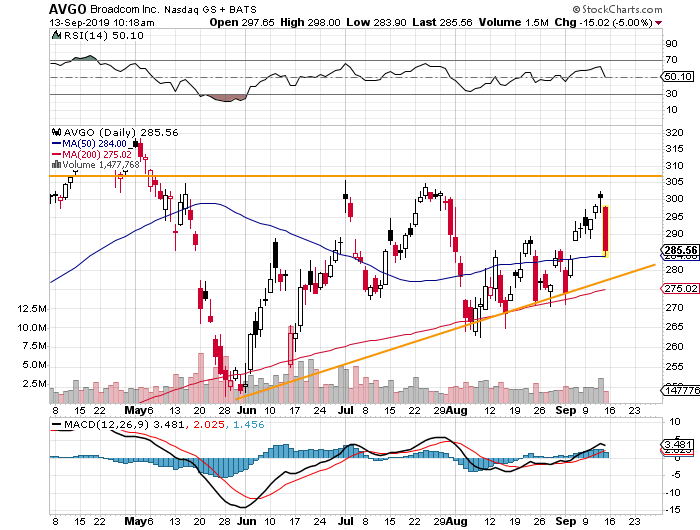 The first few times I looked at AVGO, I saw a Flat Base, a very long Flat Base. Then I reduced the time frame to just a few months, and I realized that I was looking at an Ascending Triangle. Guess what? As I write this piece, that formation remains unbroken. Even if the 50 day SMA ($284) breaks, the share price can fall as low as the 200 day SMA ($275), without disrupting the upward potential presented by the Triangle. This is by no means a sure thing, or even a probable thing, but the point is that I don't think AVGO is broken. An investor could still get paid $7.70 for a November 15th $270 put. That's equity exposure at $262.30 if the shares get down to $270 by then, and it's $770 in the back pocket (for just one contract) if they don't. Food for thought.