Great fun. We hid under cars. We hid on roof tops, in sewers, even in dumpsters behind businesses. Basically, if we thought that our pursuers might be afraid to go there, that's where we hid. What it was.... was the team version of hide and seek. Almost everything was legal in order to avoid being sent to the game's "jail". You could run, you could even fight. Only two rules. No weapons, and everyone being pursued had to stay in bounds. The legal playing field usually encompassed several city blocks in each direction. My guess is that the age of over-protection, as well as the internet has killed off the street games played by adolescents of another era.

The world may have forgotten those urban street games of another time. The marketplace has not. Are you in hiding? This morning, it looks like the forces of evil are looking for you. Oh, and they're not afraid to follow you into a dark alley.

Where do we even begin? On Thursday, the Russell 2000, and to an even worse degree, the Dow Transports found themselves beaten far more severely than was the rest of the marketplace. For those transports, the beatdown has reached close to a 7% haircut over a week. Large cap indices camouflaged what was really a lousy day overall. I am going to go out on a limb and guess that not everyone noticed that for the Thursday session, between stocks domiciled at the NYSE and the Nasdaq in aggregate, 39 issues traded at their individual 52 week highs during the session, while 731 (not a misprint) hit their 52 week lows. Ringolevio 1,2,3.

More than 24 hours ago now, the Swiss National Bank's Thomas Jordan told the world that he saw downside risk to the global economy. A few hours later, the ECB's Mario Draghi more or less echoed that sentiment. Overnight, China's National Bureau of Statistics went to the tape with data on both Retail Sales and Industrial Production for November. Both missed expectations, both quite badly. In fact, Chinese retail sales are now growing at the slowest pace since 2003 (not a misprint). LeBron James made his NBA debut that year for perspective. Auto sales in particular printed at -10% (no decimal there) year over year. Growth in Industrial Production? Good news. That series is now running at just three year lows.

I have been harping on taking a more defensive skew for some time now, and have repeatedly called for increased cash levels going back for most of the year. Not because I am some kind of genius. Far from it. I do have a surplus in something that is difficult to have a surplus in. I have experience. That comes only with age, and living through past failures. I have learned over time is that it is okay to be slow when confidence wanes. Personal morale takes a far lesser hit when one is late to chase the bull, than it does when one is late to chase the bear. Understand? One profits less than one could have? So what. One loses more than one should have? Well, now that's a kind of pressure that those who take normal jobs with set salaries or wage rates will never know. There are two kinds of pundits that financial media viewers will see stress caution in volatile markets like this. The ones who say they "like" a name because they have never bought, and will never actually buy a share of stock with their own money, and the ones who've actually been punched in the nose a few times.

While, the Chinese economy appears weaker daily, and the whole Brexit debacle runs right toward a hard break, a plethora of flash PMIs hit the tape across Europe on Friday morning. As far as the eye can see, carnage. Apparently, in almost every major country, both the manufacturing and services sectors grew much slower than projected. In fact, in France, they didn't grow at all. France is in obvious decline. Fire in the streets will do that to an economy. Do we even need to bring up GDP numbers in Germany, or Japan? Oh, on Brexit... the world acts as if the UK will act in isolation forever. There's a reason the NA was taken out of the new NAFTA, there sport.

Returning home to the U.S., the Atlanta Fed's GDPNow model for Q4 growth is now down to an annualized 2.4%. That model will be revised after today's data on November Industrial Production and Retail Sales are released. What could go wrong? Well, since you asked.....

The Gang That Couldn't Shoot Straight

The FOMC will huddle up on policy next week. That's why you have not heard a peep (thank goodness) out the group this week. The spread between yields of the the U.S. ten year note, and the U.S. two year note now stands at about 15 bps this morning. Futures traded in Chicago are projecting an 80% probability that the FOMC will take the Fed Funds rate up 25 bps on Wednesday. Please let this sink in. No economist that understands what happens to average people during a recession would put upward pressure on short term rates to a degree greater than the 10/2 spread. Understand? If the yield curve remains where it is next week, a rate hike can only be considered an intentional attack on the middle and lower classes of this nation.

How to stop an economic calamity while the rest of the planet goes into hibernation? Not easy. In fact, this nation will no doubt slow down with the planet, but the very first steps have to be made to repair the yield curve prior to putting any additional upward pressure on shot term yields. The Treasury Department can cooperate by focusing issuance on the long end. Yes, this is complicated. Doing your job is complicated. Get over it. This may even hurt the marketplace, as the long term borrowing costs rise, but what do you think happens to the marketplace eight months to a year after an inversion? I am beating a dead horse. These people refuse to learn. When they abandon you, I will not. At least those futures markets are now only pricing in one 2019 rate hike, with a 20% probability for a second. Oh, and when the rhetoric does turn slightly dovish next week, as it will, just get rid of the dot plot, Jay. it's foolish.

A simple pleasure. My wife probably doesn't realize this, but I like actually going to our local Costco (COST) . I like moving in and around each aisle, seeking better prices than I might find elsewhere for both household and business purchases. I especially like buying a fully cooked rotisserie chicken to bring home for dinner for less than the cost of a whole chicken from the grocery that needs to be cooked. COST reported the firm's Q1 results on Thursday night. It would appear that at an adjusted comparable sales growth rate of 7.5% (8.3% in the U.S.), that I have plenty of company. It would so appear.

The numbers get confusing, but after excluding tax benefits of 19 cents, and a 7 cent charge, EPS came to $1.61, or a penny less than Wall Street was looking for. There were no whispers out there that I saw other than the consensus itself. Investors have been selling this name overnight. I might think that pressure here will extend to the firm's competitors, Walmart (WMT) , and BJ's Wholesale Club (BJ) . Revenue was strong enough at 10.7% year over year growth. In fact, this was a very decent quarter. E-commerce popped more than 26%, while net income ramped 19.8% sequentially. The only blight that I really see is in performance outside of the U.S., and that may very well be a dollar strength story in the rear view mirror, and of course a growth story to the front.

Does a trader buy this name on this morning's discount in what looks to be a broadly weaker opening for U.S. markets? Let's go there. 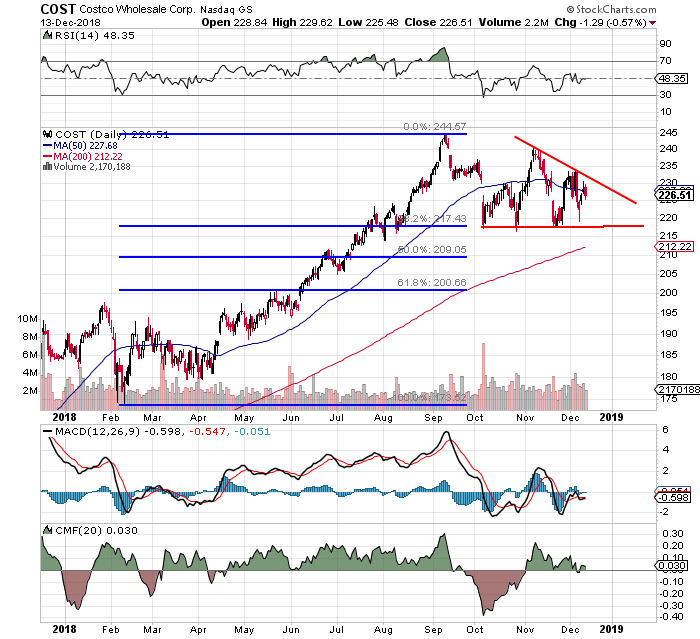 Sort of looks like a chart for the S&P 500 over the same time frame, except for one thing. While the S&P 500 has seemingly formed a triple top coinciding with a triple bottom, Costco has formed a triple bottom and a cascading series of lower highs to along with it. To me, admittedly I did not catch this before this morning, but someone really watching the name could have seen a selloff in the making. Both RSI, and the daily MACD really appear noncommittal. Money Flow has not been a problem.

This morning, the shares are trading around 220. If one really wants to own the name, I would think there is a strong likelihood that the investor gets a chance at 217. With a dividend yield of just 1%, I am not motivated to get long a $220 stock in this environment. That said, if you indeed are, I would advise an investor to inch his or her way in at 217. If that door should open, it's a short ride to 209. I think a take and hold of the 50 day SMA (currently 227) is the only way I get fired up. This is a good company. This, for me, just is not the price. On to the next thing.

Get an email alert each time I write an article for Real Money. Click the "+Follow" next to my byline to this article.
TAGS: Earnings | Federal Reserve | Investing | Markets | Options | Rates and Bonds | Stocks | Technical Analysis | Retail | China