You have heard me use this term often in recent years. I think I kind of made it up years ago. We have opined often enough in this space on the dangers of a flattening yield curve, and the necessity of the FOMC to attempt to repair the badly damaged slope of that curve. Fact is, we openly opposed even starting the balance sheet roll-off (QT) back in 2017 until some kind of attempt had been made. They don't listen. For some reason, academic economists never seem to pay heed to market economists, though they are data-dependent, and by the nature of the job, we have to be anticipatory. On policy. On human response.

Our dear friends at the FOMC could not see that by raising short term target interest rates while drawing down the balance sheet ahead of trying to undo the damage caused by Operation Twist back in 2011, and then exacerbated by further quantitative easing, that they would imperil the economic health of a nation. According to an article at the Wall Street Journal on Tuesday, this message that should have seemed quite urgent when delivered so long ago, does seem to finally be gaining some traction.

For those who don't come from an economic background the deal is simply this. The Federal Reserve's balance sheet is top heavy. Sure, we expect to hear from the FOMC on Wednesday afternoon. There will almost certainly be messaging on a halt (perhaps semi-permanently) to the balance sheet roll-off program commonly referred to as Quantitative Tightening. The fact of the matter is that the balance sheet holds no T-Bills. These are federal debt obligations built with maturities that run shorter than one year, though according to that WSJ article this kind of Treasury debt offering makes up roughly 15% of all outstanding Treasury securities. On the other side of the token, thanks to the Fed's focus throughout the QE years on the longer end of the curve, the average maturity of those holdings on the central bank's balance sheet is an approximate nine years. Again, according the the WSJ, the average maturity of all outstanding Treasury Department debt is less than six years. Out of whack.

Most readers, I think, already grasp that when buying debt products, the price of the security increases thus pressuring yield. Most financially inclined folks get the connection long ago made between an inverted yield curve (usually meaning the spread between the yields offered by U.S. 2 year and U.S. 10 year paper.), and an economic recession that would likely come perhaps a year, maybe less, later. By focusing Treasury purchases on the long end, the Fed had kept headline interest rates very low. By increasing the target for the Fed Funds Rate, without participating in short term markets, those yields have been permitted to rise unimpeded. See where I'm going with this?

This (Wednesday) morning, that 2-10 spread we speak of now stands at less than 14 basis points. That's dangerous. What's healthy? I'd like to see 80 or 90. A cool 60 would unleash the financial sector. That's not realistic. Not anymore. Right now, not only does the U.S. one year note offer up more yield than the U.S. five year, but so do six month, and even three month T-Bills. You see, a large segment of the curve has already been inverted for quite some time. Think that's in the least bit normal? How to remedy? Un-Twist. You'll recall that in order to provoke risk taking, Ben Bernanke's Fed sold short term debt to buy long term debt back in 2011. This action proved to be a profoundly unwise decision that has in my opinion, along with QE, destroyed the extension of credit as a business, and thus hampered the domestic economy's ability to grow at a sustained pace ever since.

The Fed has to buy short-term paper in order to repair the curve. No maybes about this. The economy will never, ever perform normally without necessary repair. Suppress short-term yields. To do this without increasing the overall size of the balance sheet could be tricky. Beyond reinvesting what rolls off of the book, the central bank might even have to sell longer term paper. That would allow for higher yields more quickly at the long end. This would roil financial markets. Understand that. In the end though, it probably saves an economy through the reintroduction of a more normalized environment for price discovery that takes place in an arena that allows for a more sentient assessment of risk over time by both lenders and borrowers. If there is a noticeable slowdown in the velocity of money as human response, then slow the program. Too easy.

In addition, another benefit of a balance sheet bearing shorter average maturities across the portfolio allows the central bank to be better prepared to ease policy in the event of a contraction in overall economic activity. Yes, the size of said balance sheet would have to be increased in the case of such an event, but a better composition of the portfolio going in, would allow for a quicker roll-off coming out. Got me on this?

News trickled in. Equity markets had been hot. Real hot, going into this week's FOMC policy decision. Still no trade deal. An article at Bloomberg cautioned. Then we saw it. The South China Morning Post had reported that President Xi would not accept any deal bearing an enforcement clause that appeared one sided.

Complicating matters would be the hair now growing on China's pledge to purchase $1.2 billion in additional U.S. goods over a six year period as a means to close the trade gap. Obviously any trade deal would have included sizable purchases of Boeing (BA) 737-Max civilian aircraft. Any such purchase has now obviously become more complicated. In addition to aircraft, China would in any such deal increase the purchasing of semiconductors from U.S. companies, but in the process demand that manufacturers move such operations to China, which in turn dampens enthusiasm across the industry as that would require uncompensated capital outlay. You thought this was going to be easy, didn't you?

Hence, a little selling turned into algorithmic response on slightly higher volume. High level talks are still scheduled for next week, and the goal remains a finalized deal by late April. I wouldn't bet against it. That said, I wouldn't really bet on it. Dampen portfolio volatility. I am. One thing that we know for certain is that President Trump will simply walk if he's not happy, and he surely does not care in the least how the media perceives this. That's not really a bad thing... but it would be for stocks.

Remember when I told you to wait until after earnings to add to Tencent Music (TME) long positions? Last night's selloff despite decent numbers was all too obvious. Okay to buy now? Let the name show some support first. Just my opinion.

Now remember way back when I told you that I was selling my Micron (MU) long (near the bottom) in response to the revenue miss in December? I'm not going to lie. I stated selling the stock at lousy prices, but then I noticed that I was wrong. Though I no longer trusted the firm, not their guidance, there was no mistaking that money was indeed coming into the name.

Months later, the stock is trading much higher. I have traded a few shares in and out, and have sold both calls and puts against the position trying to make up for the poor decision to sell the name in the low $30's. Here we are. Micron reports after the close. I still hold a long position 50% the size of the one in terms of share count that I held in late 2018. Only now, I have something to protect.

The bell will ring at 4 pm Eastern. Consensus view for Micron is for EPS of $1.68 on revenue of $5.84 billion. If realized, the earnings would illustrate a 40% decline year over year, while the revenue a 20% decline. You may have noticed that on Tuesday, Rosenblatt Securities significantly reduced their expectations for both EPS and revenue to levels below industry consensus based on pricing conditions for both DRAM and NAND memory chips. On Monday, Morgan Stanley expressed "surprise" that Micron had not pre-announced. Over the past week or so, we have heard from Bank of America Merrill Lynch, Cross Research, Wells Fargo, and Cleveland Research. All have opined on Micron. All negative. 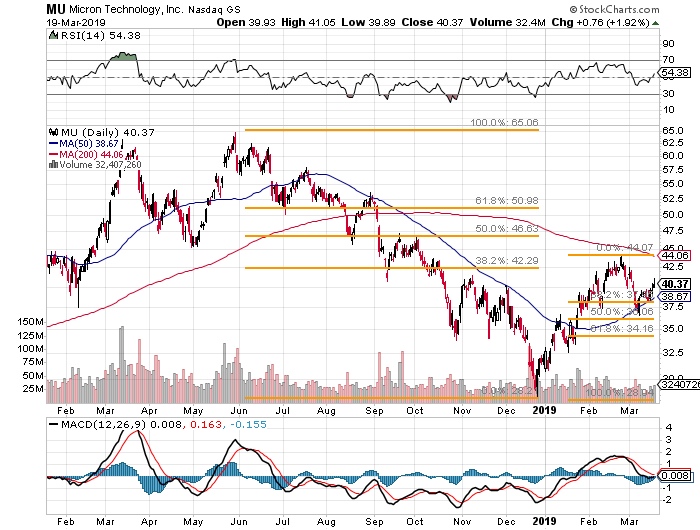 Sure is hard to make a sentient argument against the use of Fibonacci levels as a trading tool looking at this name. That said, I've made my money back in the name, and they've fooled me before. Do I look like a sucker to you? Don't answer. I may go into the close with a small position, but I am almost certain, as long as I am still on this side of the dirt, to further reduce this position today, prior to the closing bell, maybe before the Fed. We'll see.

Meanwhile, I see that April 18th $36 puts went out at $0.82 on Tuesday night. My idea is to make that sale, forcing me to repurchase the shares sold today in a month if the stock collapses. If that's how it plays, I would have extracted more than $5 from the name, or about 12.8% (including premium) while resulting in a position consisting of the same share count. Poof. Like magic.

If not, we still have a profit. I pocket the premium and take my wife to lunch.

Get an email alert each time I write an article for Real Money. Click the "+Follow" next to my byline to this article.
TAGS: Earnings | Investing | Markets | Stocks | Technical Analysis | Trading | China | Market Recon